Your Guide To An Ultimate Summer Of Adventure In Brisbane

Summer is a comin’. Like the glorious, SPF 50+ smelling, stone fruit ripening, sweat glistening beast that it is.

As November clicks over, most of us are already winding down for the year and looking forward to the parties and prawns of Christmas and New Year. It’s also the time we start planning what we’re going to do instead of hiding out in our air conditioned living room and complaining endlessly that it’s “too hot to live” like last summer.

In the spirit of adventure, we’ve put together this adventurous summer itinerary for you—jam packed with activities for the bold and brave, the culture vultures, the outdoorsy and everyone in between.

From farms to national parks, botanical gardens and fields, Brisbane and its surrounds have plenty of flora and foliage to admire on foot—so head out this weekend on a walk amongst some of nature’s little pretties: the flowers.  If you’re lucky, the jacarandas should still be in bloom, but if not, don’t fear. The summer sun is perfect weather for sunflowers, roses and most tropical varieties to bloom in all their brilliance. Find our favourites here.

Go Kayaking On The River

Get those paddling arms ready to hit the river, kayak-style. With the opening of the New Farm Park River Hub, Brisbane City Council has launched Kayak Eco Adventure tours from December 2019 through to April 2020. For just $5, you can paddle the river in a two-person kayak, taking in the local flora and wildlife of Brisbane waterways with an experienced guide to help with kayaking skills. If you’re not so much into the brown snake, we’ve rounded up some other options here,  or you can swap the kayak for a paddleboard and SUP on the Gold Coast instead.

Spend A Weekend At Tangalooma

It’s crazy to think that just a ferry ride from Brissie there is a marine wonderland that so many of us are yet to see. It could be a weekend getaway, a week vacay or a mid-week break, but do yourself a favour and get to Tangalooma. Cool off in the pristine calm waters surrounding Moreton Island, whether by spying coral and fish when you snorkel the wreck, stepping out at dusk to feed the dolphins, or jumping into a kayak. Plan your trip here. 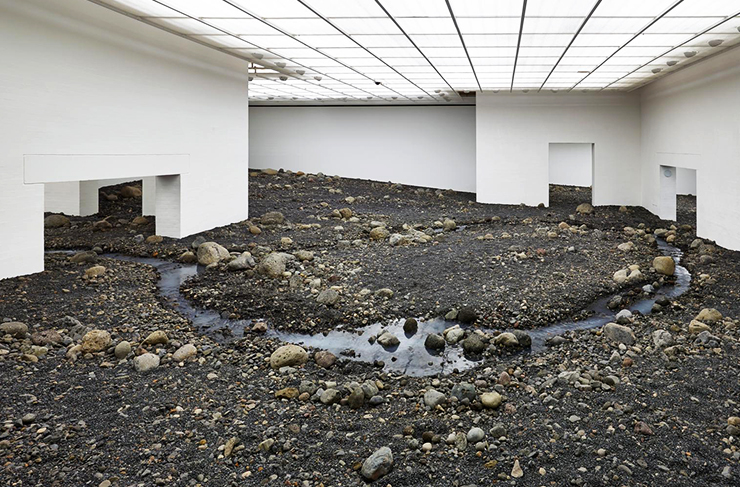 Dive In To Water At GOMA

As the mercury starts to creep up, a weekend morning or afternoon well spent will be at GOMA’s must see exhibition this summer, Water. The exhibition is much more than paintings on a wall. It’s an immersive, mixed-media journey of installations from artists around the world exploring water, one of the most important elements for animals and humans alike. Walk across a rocky riverbed, stand with animals as they drink at a waterhole, or navigate rising tidelines with your own body.

You’ve heard it here—you don’t need to travel to Iceland, Alaska or thereabouts to see the northern lights, just to Mount Coot-tha’s Sir Thomas Brisbane Planetarium. On Friday 13 December they’ll be screening a 45 minute time-lapse vison of the aurora taken over seven months in the Arctic Circle. Book your tickets on the Brisbane City Council website and you also get a night sky tour.

It’s the weekend after Christmas and you could stay in Brisbaneland with the rellies from Victoria, or you could head south down the M1. The good thing about summer is that the sun is up super early, so you’ve got no excuse not to make the most of the Goldie’s best beaches before the sun has reached peak skin-frying temperature and be back in time to see the last of the cricket. 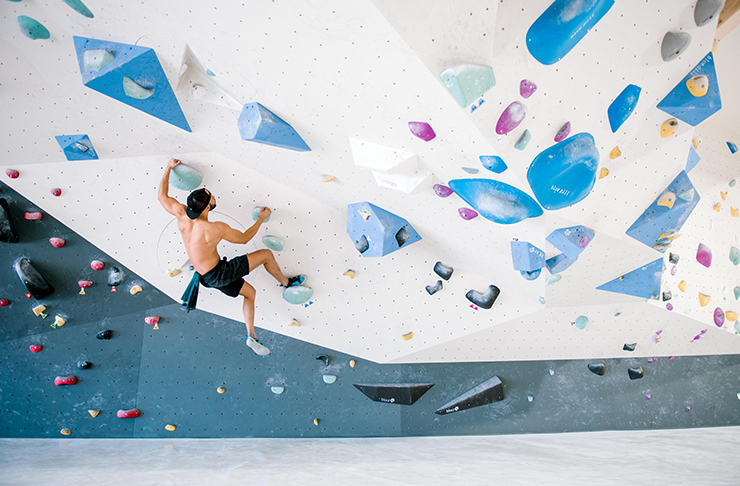 Chances are that you’re now realising just how much you indulged over Christmas and are looking to get moving. Rock climbing is a good challenge and full body workout for the experienced and novices. Sure, you’ll have to stuff yourself into some activewear, but it’s a fun form of exercise that you can do with a mate. Escape the heat and hit one of the indoor rock climbing gyms in almost every corner of the city.

Like the idea of camping but also can’t live without things like beds, hot water and fluffy robes? Well, thank goodness for glamping. Sure, it’s a little more expensive than pitching a two-man tent, but well worth it when you wake up fresh and relaxed. Ring in 2020 with a night or two in one of Ketchups Banks’ luxury eco tents, complete with a queen bed and ensuite, BBQ area and gourmet hampers.

Break Out Of An Escape Room

If voluntarily being locked up in a horror-scene-like scenario with a bunch of your mates (or worse your family) is your jam, then breaking out of an escape room will be right up your alley. Escape rooms are for those who consider themselves armchair detectives, puzzlers and/or adrenaline junkies. Sounds like you? Brisbane has a whole bunch of escape rooms, ranging from the freaky to the tactical to challenge your lateral thinking skills 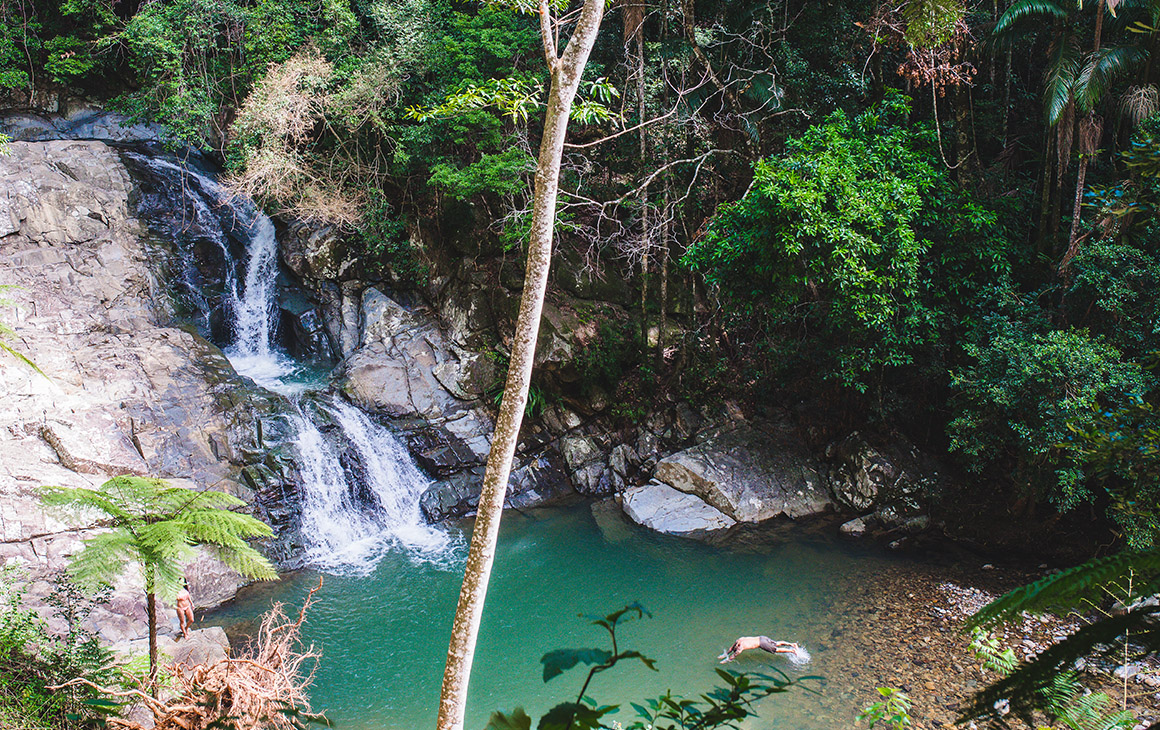 They say all good things must come to an end. Even though summer is technically winding down (read: you’re almost definitely back at work by now but it’s still hot and humid AF), there’s still room for one more outdoors adventure. We’ve rounded up a whole list of picture perfect waterfalls to swim under in the Gold Coast area—the perfect antidote to beat the coming end of summer blues.

If you’re going to be holed-up in the air-conditioning playing video games, you could try it in a less antisocial environment and actually ‘live’ the experience. We’ve all discussed our plans for a zombie apocalypse, now it’s time to put your money where your mouth is and play Zombie Survival in virtual reality at Zero Latency in Newstead. Will you make it out alive?

Take A Dip In A Natural Swimming Hole

Time to jump in the car and put in one of one of these natural swimming holes into your GPS. There are so many creeks, dams and rivers within a couple of hours drive of the city, so why not make the most of your last few summer weekends and cool down in one of mother nature’s own natural swimming pools. Don’t forget to pack a picnic.

Want more summer itineraries? We've got one for the foodies, wellness warriors and action lovers.