There’s often an underlying grumble from northerners who feel they’ve been largely left out of the Gold Coast’s hospitality boom. While new cafes and restaurants pop up like mushrooms at the southern end, the other half of the population have been longing for a slice of the action.

Good news is, a swag of new northern venues are on the horizon. Hurrah! But there’s one we’re particularly excited about… Yes, Southport, the time has come. Your sunny new rooftop bar opens this Tuesday 21 November and we’re calling it now: Mr P.P.’s Deli & Rooftop is the coolest thing to happen to the northern Gold Coast in 2017.

Ben Howe and his family have been a driving force in the rejuvenation of Southport’s Nerang Street. Over the last decade, they’ve resorted the historic ambulance station into the city’s finest co-working space, CoSPACES. They’ve breathed new life into The Exchange and today, have worked their magic on an ugly duckling orange brick building that’s sat underutilised in the heart of the city’s business district.

Though who is Mr P.P. exactly, you ask? Just as Percy’s Corner in The Station next door was named after the ambulance station’s first superintendent, Percy Raby, Mr Philip Palmer Agnew (AKA Mr P.P.) was Southport’s first Post and Telegraph Manager from 1883 to 1886. A talented actor, playwright, poet, illustrator and photographer, it seems Mr P.P. was one of the city’s pioneering creatives, too! The building is located on what used to be the postmaster’s residence, until it was replaced in 1967 by the Maternal and Child Welfare Centre. In 2014, the site was abandoned and sat empty. Until now.

Today, the re-energized building’s primary resident is Study Gold Coast, with its adjoining gathering hub for local and international students. And this week, the launch of Mr P.P.’s Deli & Rooftop will complete the new chapter for 43 Nerang Street!

Just like CoSPACES’ co-working culture, Mr P.P.’s has been a collaborative team effort. Ben, together with Spacecubed’s Arran Woollams (who’s designed a staggering number of hospo venues on both the GC and Brisbane), accountant friend Kiel Sinclair and Southport-based lawyers Matt Williams and Sam Rees, are young professionals who are passionately invested in the future of the CBD and who’ve been working overtime to bring their vision to fruition.

While honouring the heritage of the land, they’ve envisaged creating a space people will be drawn to. A place friends and work colleagues can gather on the rooftop, as the sun sets over the city and the lights flicker on.

And by gosh, it looks fabulous! 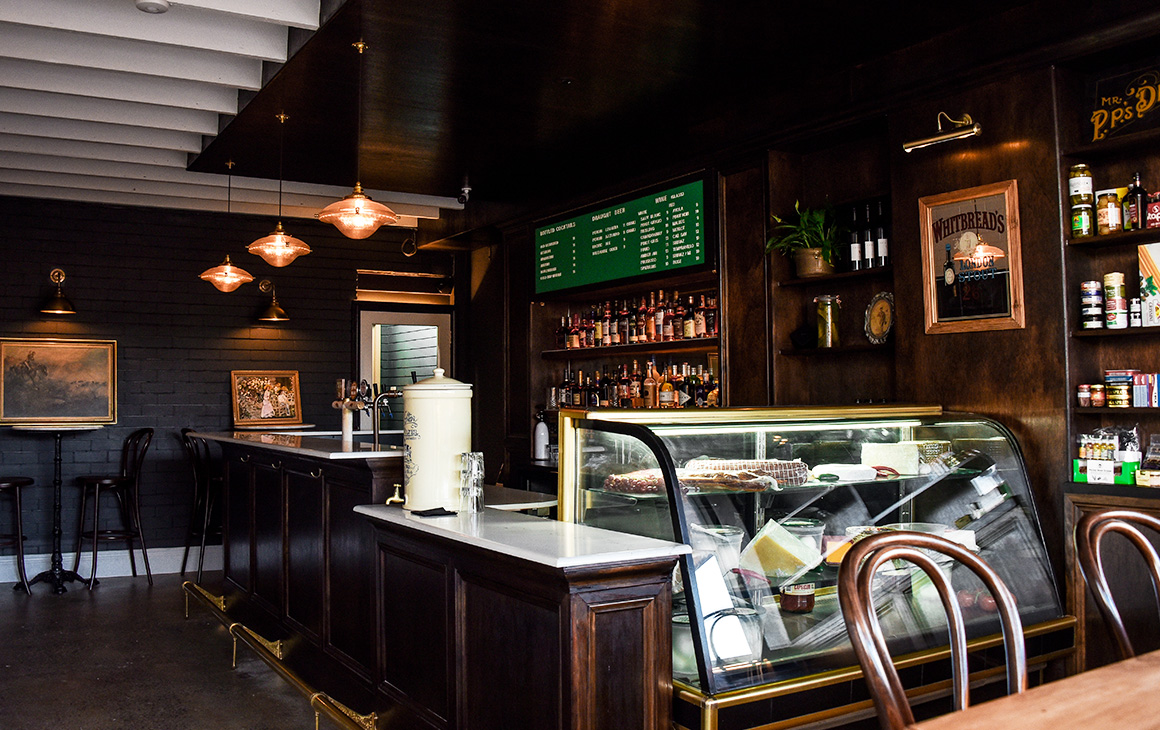 Yep, the guys even tracked down the old postmaster’s family in Warrick, just outside of Brisbane, who’s great great grandchildren have assisted with photos and stories. It’s soul-stirring stuff that’ll make you pause and appreciate Gold Coast’s forefathers and the grounds you’re standing on.

Pull up a stool at the bar or get cosy in the European-style seating lining both the front patio and cool side alleyway. Peckish? Filling the glass cabinet are hanging cured meats and gourmet cheeses, alongside shelves lined with pickled veggies, olives, canned sardines and mackerel, allowing bar guests to build-their-own charcuterie boards to complement a variety of wines, many of which are low-interference. Whiskey more your style? They’re all over that, too.

We know mention of a rooftop bar makes you truly weak at the knees, so let’s jump to that.

Upstairs, you’ll pass original hardwood floors and converted rooms that were once nurse residences during the building’s life as the Maternal and Child Welfare. Out front, under a fully-retractable roof, the sun-drenched rooftop bar is scattered with picnic tables, booths, high bar seating and potted palms.

On the rooftop menu are jugs of beer (eight options on tap) and shared cocktails, all served with urban vistas over the CBD and rooftops. Food-wise, tasty mains include roast pork chop with butternut pumpkin and salsa verde, duck meatballs plus rigatoni with cauliflower, hazelnut, thyme and Grana Padano. Or, tuck into a variety of creative pizzas, if you’re keen to soak up the evidence before that impromptu post-work session gets out of hand.

Launch opening hours are Tuesdays through Thursdays, 4pm ‘til late and noon to midnight on Fridays and Saturdays. CBD dwellers, we know you’ve been seriously hanging out for this. Live a little further north or south? Conveniently the G:link stops right out front, and with Not Tonight Bar, and a few others on the horizon, now bar-hopping in Southport is a legitimate option.

What: Mr P.P.’s Deli & Rooftop
Where: 43 Nerang Street, Southport
When: Tuesdays through Thursdays, 4pm ‘til late + Fridays and Saturdays, noon to midnight

Looking for more gems in the northern end? Check out these spots here and here.