Australia has a proud and noble culinary heritage, which begins somewhere around the invention of the Chiko Roll, and ends on a Sunday morning outside the local Bunnings. Parisian gastronomy may sniff at our idea of ‘fine dining’, but we’re guessing they’ve never tried a Tim Tam Slam, or chewed a glass of Milo with the correct milk-to-milo ratio, which is a spoon-bending 60/40.

Turns out Melbourne has a proud and noble culinary heritage too—it mostly consists of taking foods and putting them with other foods to create new foods. Often that no-one expected or even asked for.

So here they are guys. The best Aussie food mash-ups in Melbourne.

There’s a few lamington collaborations floating around town, but we’ve picked the most exciting. An artisan lamington ice-cream, courtesy of ex-Om Nom dessert queen Christy Tania. You can get it at Tania’s brand new ice-creamery, Glacé (open as of Thursday 24 August). The Lamington is forged from coconut ice-cream, hunks of home-baked chocolate brownie and a swirl of tongue-curdling raspberry sorbet. Oh yeah, and it comes in Tania’s signature ice-cream ‘push pops’. Get excited, guys.

The humble Golden Gaytime. Still the greatest Australian ice-cream in history, with the possible exception of the rainbow Paddle Pop. It was only a matter of time until Melbourne’s bakers tried to harness the raw power of the Gaytime in doughnut form. Bistro Morgan has probably been the most successful. It’s called the ‘Gaytime Crunch’ (we assume for legal reasons), and it’s one of the best doughnut blends going around: a fluffy brioche doughnut topped with Swiss chocolate, honeycomb crunch and a salted caramel syringe.

Reubens may not be an Australian classic, but pies sure as hell are. Murray’s Food Store in Prahran has come out with a few wacky flavours since it opened earlier this year, including a Mac n’ Cheese Pie and a Cheeseburger Pie, complete with mustard and beef patties. The Rueben is the best though: insane pastrami from Challenger Smallgoods up in Sydney, topped with American cheese and pickles, then ensconced in flaky pastry. These beauties sellout fast, so get in before lunch if you want to snag one. 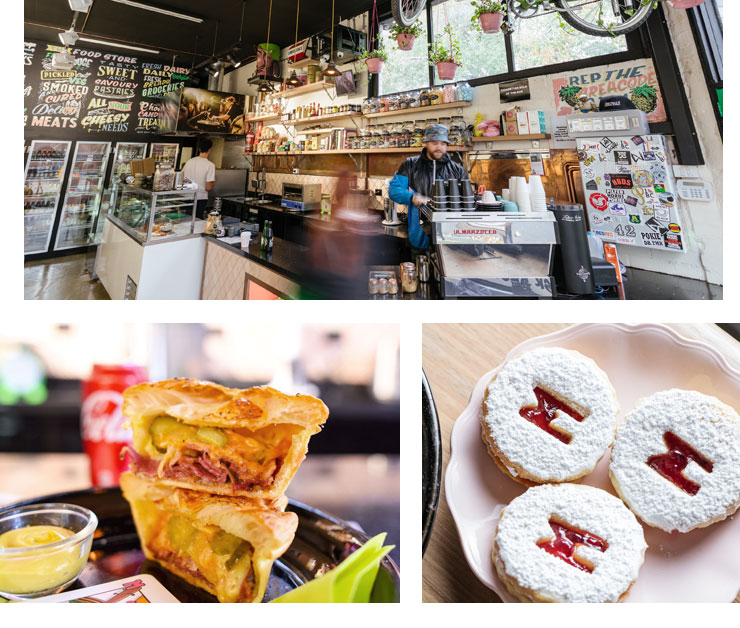 A Tim Tam Slam, in case you weren’t aware, is what happens when you bite off both ends of a Tim Tam, then suck hot coffee (or hot chocolate) through the creamy inner channel. Trunk Diner in the CBD have tried to replicate that experience in milkshake form. You can get it virgin, or spiked with Kraken Rum (guess which one we recommend). The whole blended, frothy, chocolatey mix comes served in an old-school milkshake glass, like something out of Grease.

There are two types of mashups. The ones that take inspiration from their source product, and the ones that actually TASTE like their source product. These guys are the latter. Downtown Doughnuts has somehow managed to replicate the alchemical fusion that goes into a pack of Iced Vovos, creating a doughnut that (miraculously) keeps the Vovo essence in tact. It’s a jam-filled doughnut with a crushed biscuit crust, topped with berry marshmallows, lashings of jam and coconut shards. Vovo vroom.

It doesn’t get much more Aussie than this. Andrew’s Hamburgers, the oldest burger joint in the country (sidenote: apparently that title is the subject of a long-running feud with another very old burger joint in Queensland, but we don’t have time to go into that right now) have created a potato cake burger. A beef patty, onions and cheese, sandwiched between two crispy potato cakes. It’s called The Hulk, and it’s on their secret menu. Just walk up to the counter at Andrew’s, whack a $10 note on the table and scream ‘Hulk!’ at the top of your voice. They’ll get the message. 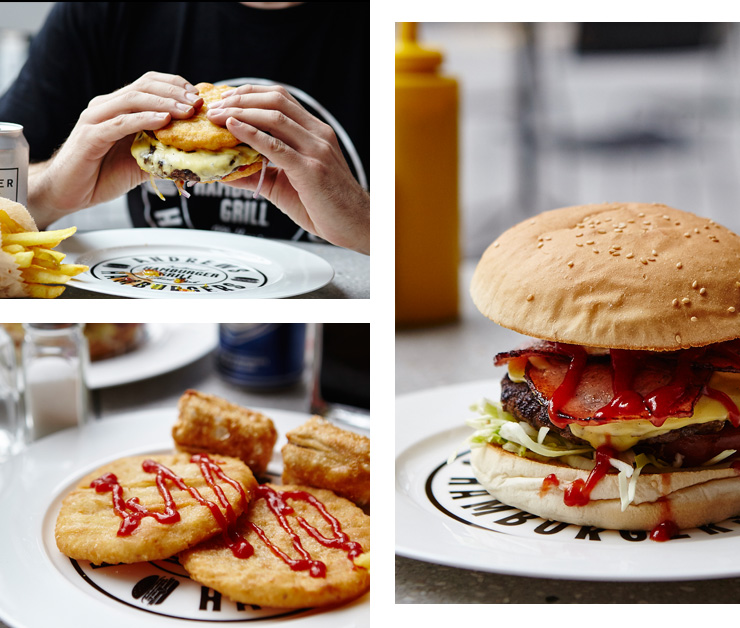 Vegemite and cheese go together like peaches and cream, or ham and cheese. Quite a lot like ham and cheese, really. And one little pizza joint in Windsor has taken that idea to its logical extreme. Small Print on High St created a vegemite pizza special for Australia Day this year (unfortunately this beautiful unicorn didn’t survive on the permanent menu, but watch this space in January next year). It kind of tastes like a giant cheesymite scroll, with the added benefit of arriving at the table hot and bubbling, not soggy from four hours sitting in a lunch box.

A Milo roti? What sorcery is this? Yep, it’s true. Collingwood’s Son In Law has added two new sizzling roti to the menu, one of which is spiked with Milo, the nectar of the Gods. It comes to the table layered on a hot pan, along with marshmallows and vanilla ice-cream. Right at the end, your waiter pours over a sugar syrup for extra sizzle. It’s the sort of dessert that will cause other tables to turn, stare and then nudge their waiters and say ‘I’ll have what they’re having.’

A jaffle is not a toastie, let’s just get that one out of the way right now. It’s made in a jaffle iron and has pressed sides. Sydney insists on calling these ‘toasties’, which is just plain wrong (don’t even get us started on Canberra, where they’re apparently known as ‘Brevilles’). Anyway, a true jaffle is an Australian icon, and there’s nowhere in town does them better than Footscray’s Bad Love Club, a boozy new bakery and jaffle bar. They’ve got a variety of sweet and savoury options, but we liked the Brucey: spiced, stewed apples and a dash of caramel sauce, cooked in a jaffle and topped with vanilla ice-cream.

This one's a limited time only sort of deal. STKBB and The Grosvenor Hotel have created something a little special to celebrate the footy finals: a meat pie burger. It's called The Greedy Sheedy (classic), a brioche bun, beef patty, crispy bacon, cheese and tomato sauce, topped with a Grosvenor meat pie. You can grab it at either venue as of right now. We're not sure if it's technically a burger made of pies or a pie on top of a burger. Either way it looks like everyone's kicked a goal. 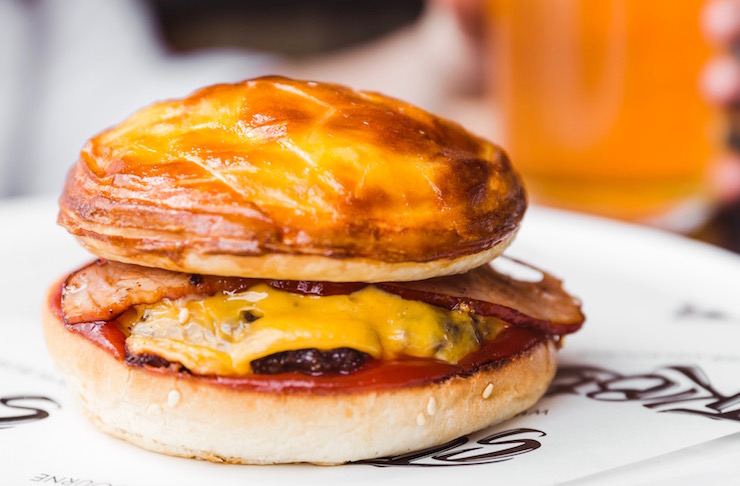 In a move that's sure to cause your aunty to raise a disapproving Christmas eyebrow, Melbourne chocolatiers Chokolait unveiled a matcha pavlova this year. It’s baked fresh every day in their CBD Emporium store, much to the dismay of pav purists (and the delight of everyone else). Layers of feather-light meringue and Belgian chocolate, topped with fresh strawberries and a Matcha-infused cream. It’s delicious, but you’d still need nerves of steel to rock up with one on Boxing Day.

Want to kick it up a notch? We tracked down Melbourne's most ridiculous eating challenges. Better pack some stretchy pants.