A guide to Melbourne street art is, by definition, out of date. It’s like making a guide for the weather. Wait a week, a month, a couple of hours, and new murals will emerge. That’s the thing about the Melbourne internationally recognised street art scene: it’s never satisfied. Well-known artists like Ghostpatrol, Ha-Ha, Kaff-eine, Rone, and Lushux are out there pretty much every night, trying new things.

There are some good Melbourne street art tours if you’re interested (Melbourne Street Tours and Melbourne Walks are probably the best), but you don’t need a guide to enjoy this stuff. Just strap on some walking shoes and keep your eyes peeled. 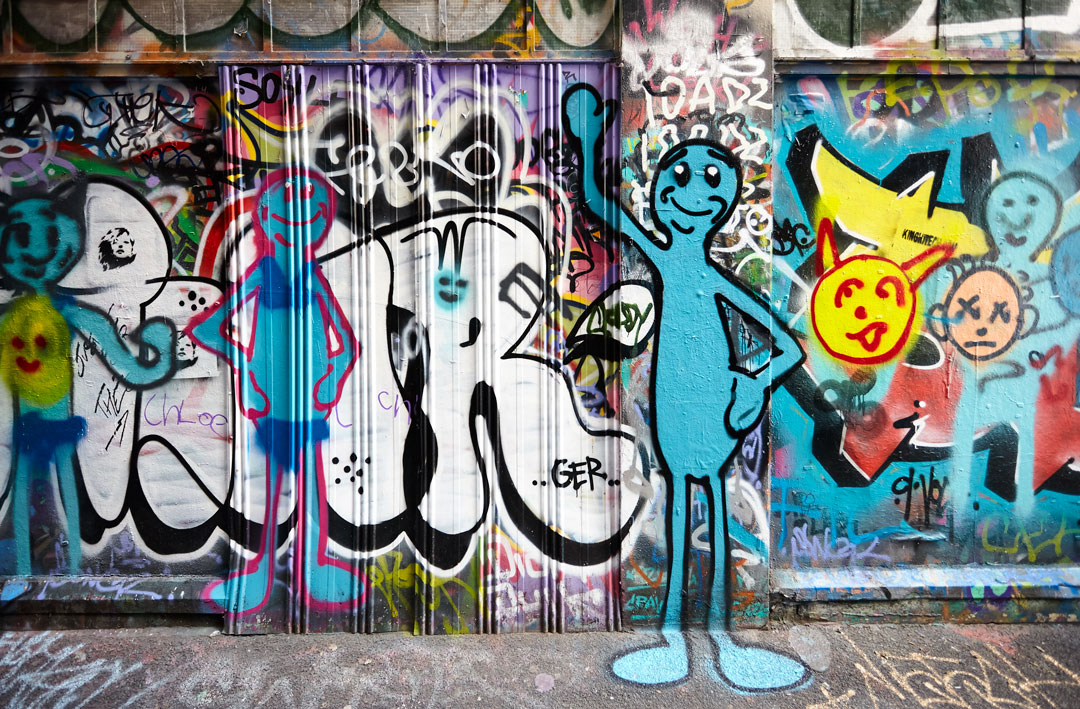 If we’re talking paint-per-square-metre, the CBD is Melbourne’s obvious street art capital. It’s what makes our laneways world famous. Most people know the popular street art spots (Hosier Lane, AC/DC Lane etc.) but there are dozens of other good sites around town. Here are our favourites.

Hosier Lane is the epicentre of Melbourne street art, so much so that it’s almost become passé. You can’t move here for tourists and selfie sticks on a Friday night. Hosier Lane is in a constant state of change, but it’s most famous for the unnamed Indigenous boy by Adnate— a 23-metre mural that overlooks Birrarung Marr.

A lot of tourists never find Caledonian Lane. It’s a tiny back alley, tucked between Little Bourke and Lonsdale Street, just next to Emporium. This was the birthplace of the St Jerome Laneway Festival, and it’s a popular spot for local artists.

Probably the second most famous street art laneway in the CBD (behind Hosier Lane). AC/DC Lane was named after the Aussie rock band in 2004, and it’s become a popular stop for walking tours in the city. You’ll find it just off Flinders Lane, between Russell St and Exhibition St.

This is a favourite spot for local miniature street artist, Tinky. Duckboard Place curves around from Flinders Lane to AC/DC Lane, but a lot of people don’t even realise it’s there. Street artists love it because it’s quiet. If you’re in the area, grab a drink at Cherry Bar, then dinner at Pastuso.

Okay, time for something really obscure. You won’t find Loveland Lane on any maps. It’s up near Queen Vic Market, just off Queen Street. A tiny, unmarked spot that’s become a real underground art scene over the last five years. Murals, installations, street art, stencils. You never know what you’ll find in Loveland Lane. But I can promise you won’t find tourists. 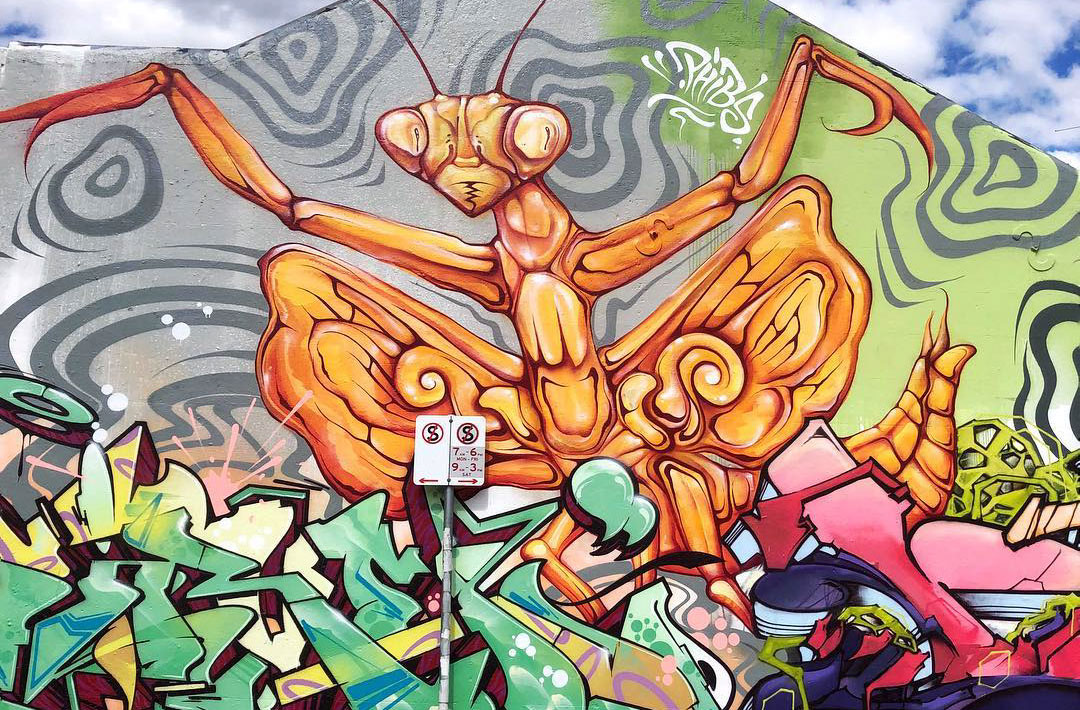 Fitzroy is a favourite playground for Melbourne street artists. As a general rule, you won’t find street art hidden down anonymous laneways here: the big murals are reserved for major roads and intersections like Brunswick St, Fitzroy St, Young St, Napier St, Smith St and Johnston St. Start on the corner of Fitzroy St and Johnston St, where you can spot ‘Spirit Anima’ and an Indigenous Australian boy from the AWOL crew (a dream collab between Slicer, Deams, Adnate, Li-Hill, Lucy Lucy and Itch). Some other good spots include: 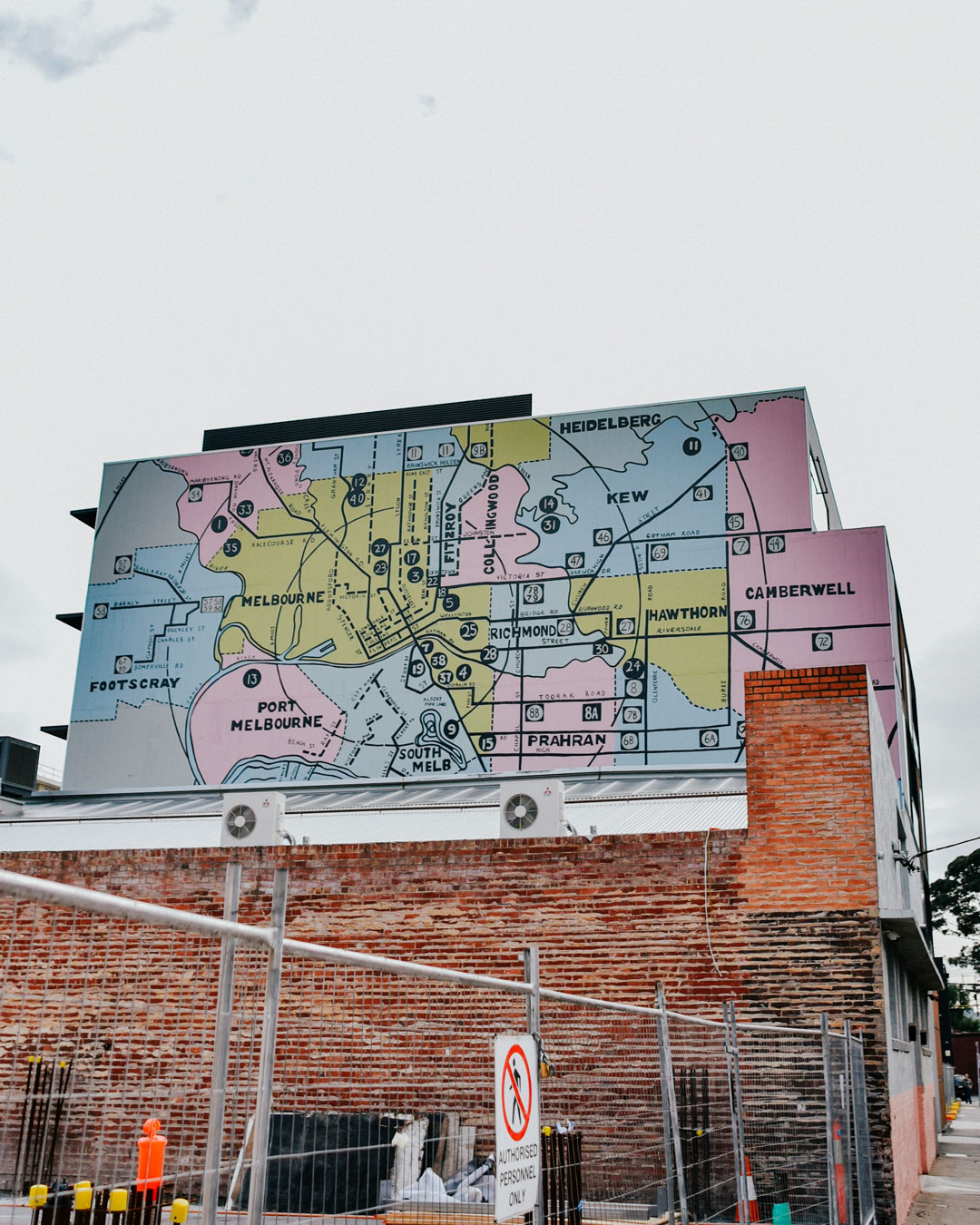 A lot of Melbournians couldn’t place Cremorne on a map. It’s an industrial back pocket of Richmond, really. A warren of warehouses, cafes and little one-way streets, just near Richmond station. Lushsux does a lot of his work in Cremorne (there used to be an amazing Lushsux mural on Balmain St, between Gwynne and Cubitt, but they turned it into apartments…classic). Here are the best spots for street art in Cremorne: 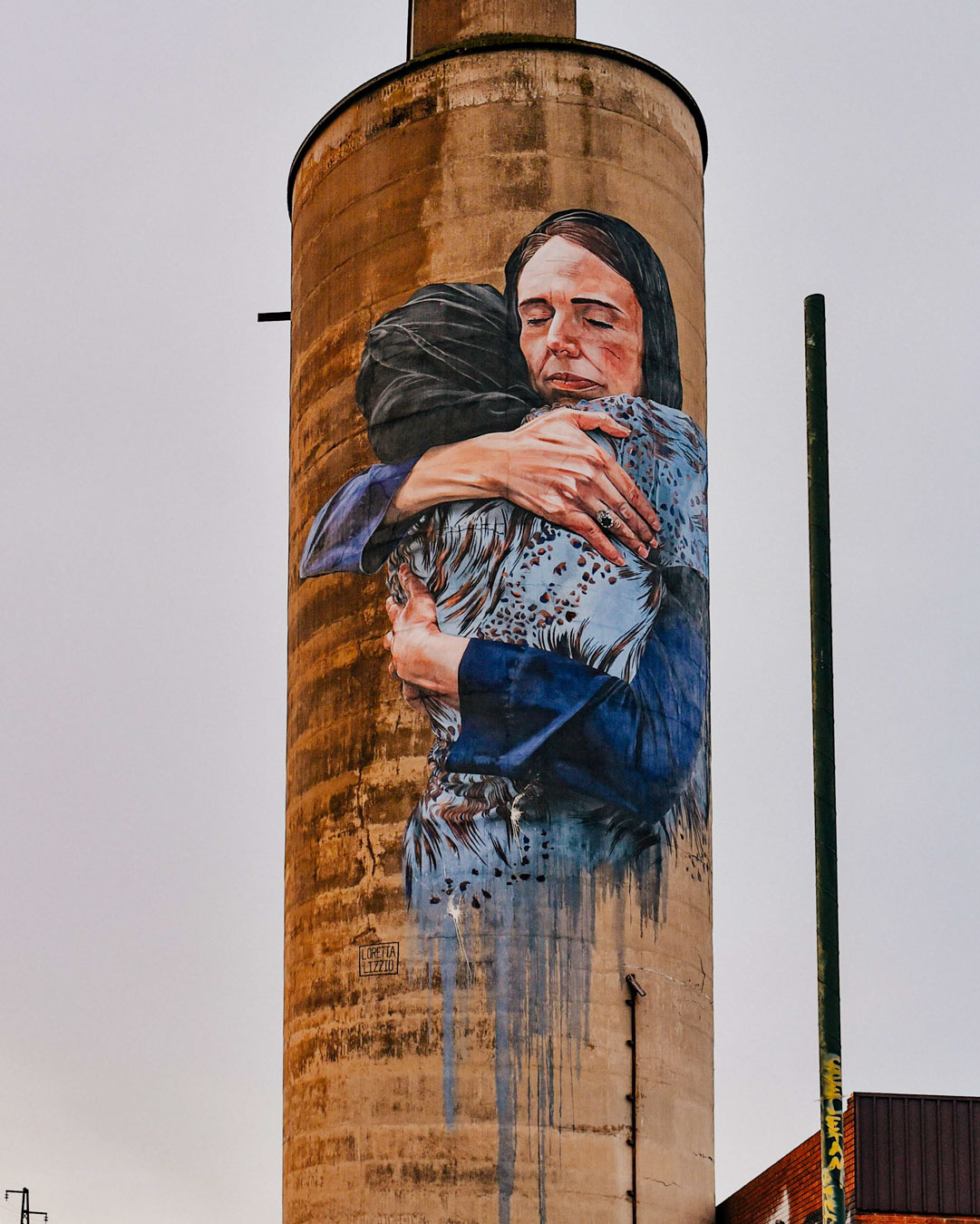 Fitzroy and Richmond tend to hog the suburban street art spotlight, but don’t discount Brunswick. Sunshine Lane is one of the best spots for street photography in Melbourne, and there are some quality murals at the top of Lygon Street, too. Our favourite? The new silo artwork on Tinning Street from the world-famous Loretta Lizzio: it’s Jacinda Ardern embracing a Muslim woman after the Christchurch terror attack. Here are the best spots to find street art in Brunswick: 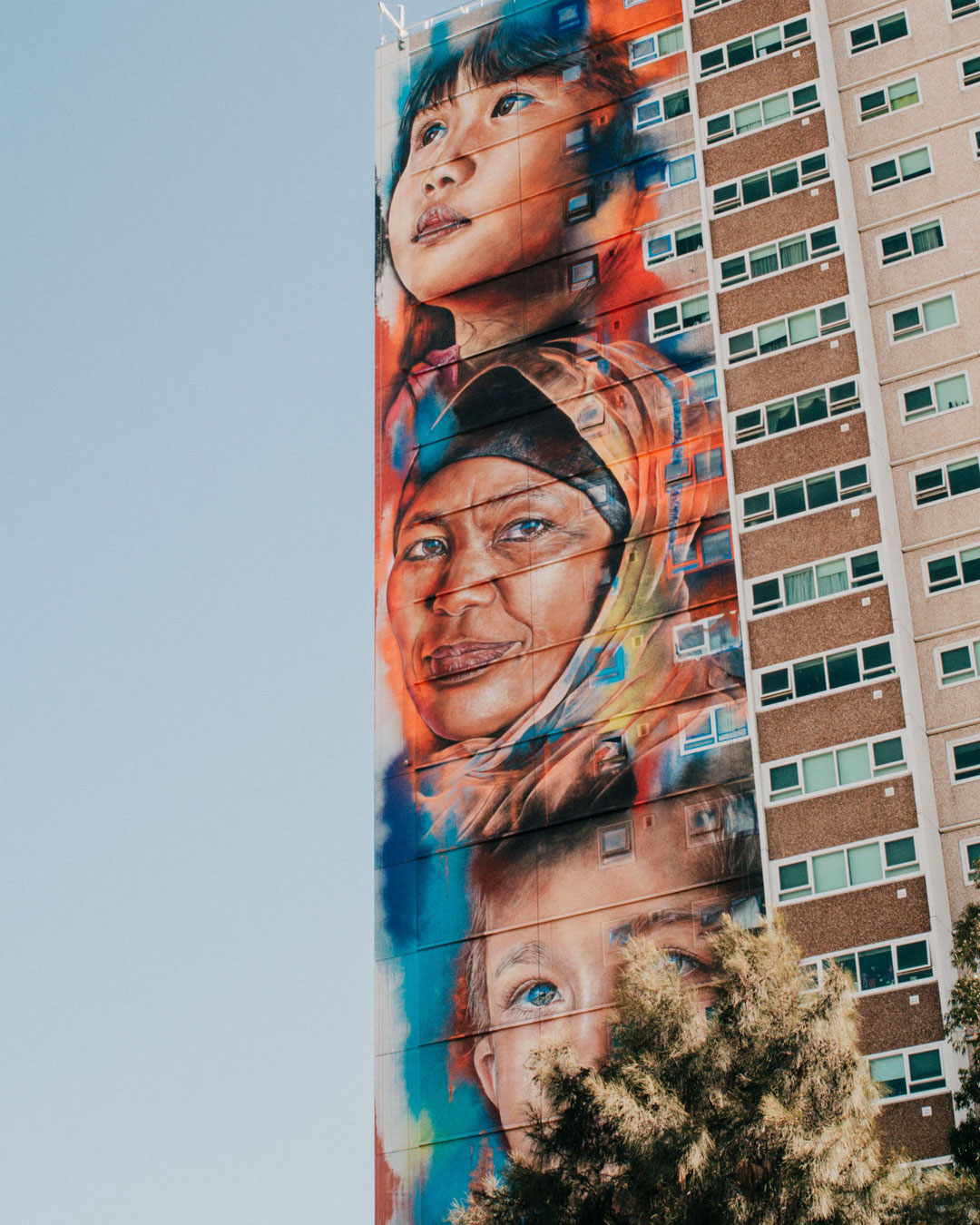 Home to the famous Wellington Street High Rise (one of Juddy Roller’s most iconic pieces) Collingwood is no slouch when it comes to street art. As with Fitzroy, it’s generally best to start on Johnston Street and follow the major roads: you can find Dvate murals on the corner of Francis Street, and keep an eye out for good pieces near the Wellington Street intersection. If you want a taste of Melbourne’s street art history, check out the Keith Haring mural, painted by the legend himself in 1984. It’s one of only 31 Haring murals left in the entire world. Here are some other good street art spots in Collingwood: 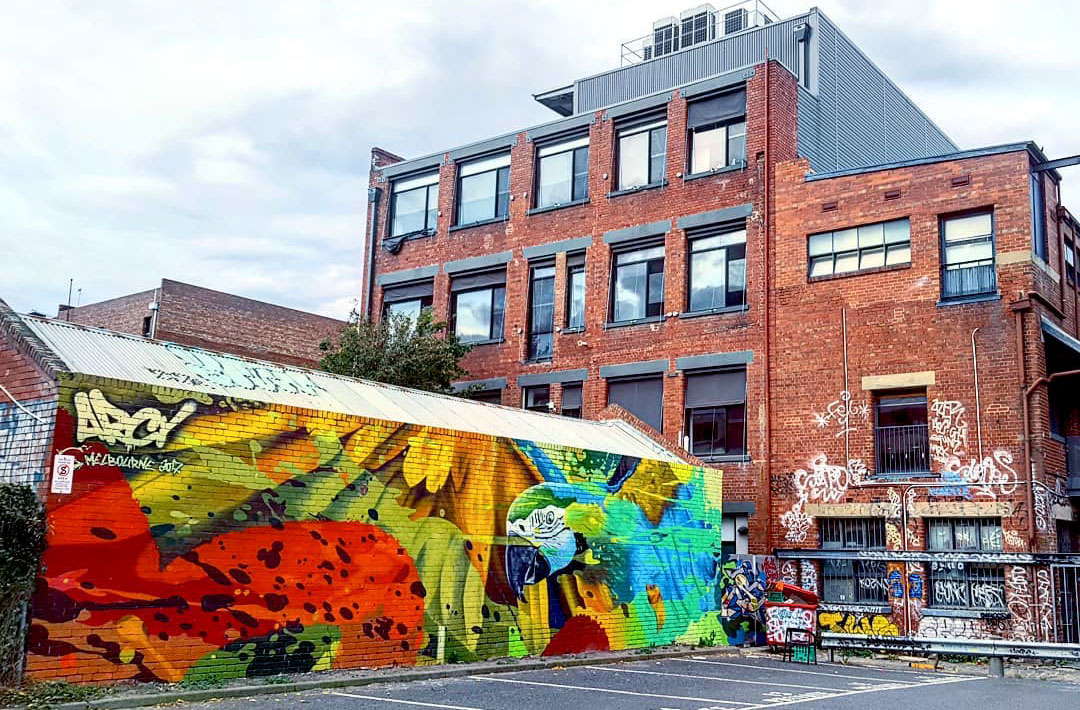 It’s probably fair to say that most of Melbourne’s street art lives north of the Yarra. But Windsor and Prahran are doing their bit to rep the Southside. The Chapel Street Precinct has clearly invested big dollars commissioning artists over the last few years, and the results are epic. UK-based Phlegm was brought on to do the Pran Central mural (a cyborg dismantling its own head, complete with augmented reality app), and you can find dozens of local pieces from artists like Robert Hague, Lynch, Tom Gerrard, Reka ONE, Guido van Helten and Sofles. Just head to Chapel Street, start at Toorak Road and work your way south. Here are our favourite street art spots in Windsor and Prahran:

Feel like staying indoors? Here are the best exhibitions and art shows happening in Melbourne this month.