A quick spoiler alert. If you want to experience Melbourne’s new shipping-container-cum-thought-experiment without any expectations, don’t read this article. Just go and do it. This article is about FLIGHT, the latest multi-sensory theatre project from Darkfield, and everything that goes on inside it. Right, we’ve got that out of the way. Let’s crack on.

It starts in Southbank’s Queensbridge Square, opposite the McDonalds. The FLIGHT team give you a little boarding pass with your seat number (10E), flight number (#DF512) and a map of the ‘aircraft’. “You won’t be sitting with your friends or family,” the tattooed British guide says, “this is deliberate. Please stick to your allocated seat. By the way, does anyone suffer from epilepsy?” Everyone gives a sort of non-committal (but presumably legally binding) shrug.

FLIGHT, like its multi-sensory predecessor Séance, takes place inside a 40-foot white shipping container. But unlike Séance, which was really just a long table with some squishy chairs on either side, FLIGHT has managed to recreate (with spooky fidelity) the interior of an average commercial airliner. Everything’s there: the cheap faux leather chairs, the useless illustrated safety cards, the overhead luggage compartments, the “pull the strap to tighten” seatbelts.

It’s not fake either. The next day, I asked FLIGHT’s PR where the hell Darkfield’s founders, Glen Neath and David Rosenberg, got their hands on an actual aeroplane interior. “Apparently they’re easier than you think to come across,” she said, rather cryptically. “Fun!”

Our group shuffles inside the cabin and starts stowing bags in the overhead compartments. 10E turns out to be a middle seat. Economy middle seats are the worst. I wonder if this is all part of FLIGHT’s subtle psychological fuckery. This might not be paranoia either, because what’s really interesting about FLIGHT is how quickly you slip into aeroplane mode, even though your brain knows you’re sitting inside a shipping container in Southbank. People put on their FLIGHT headphones, clip their seat belts, then visibly ‘switch off’—powering down into a sort of mental stand-by, just like you do on a real plane. A lady up the front turns to her friends, “They put me right up the front. Let’s hope we don’t crash!” 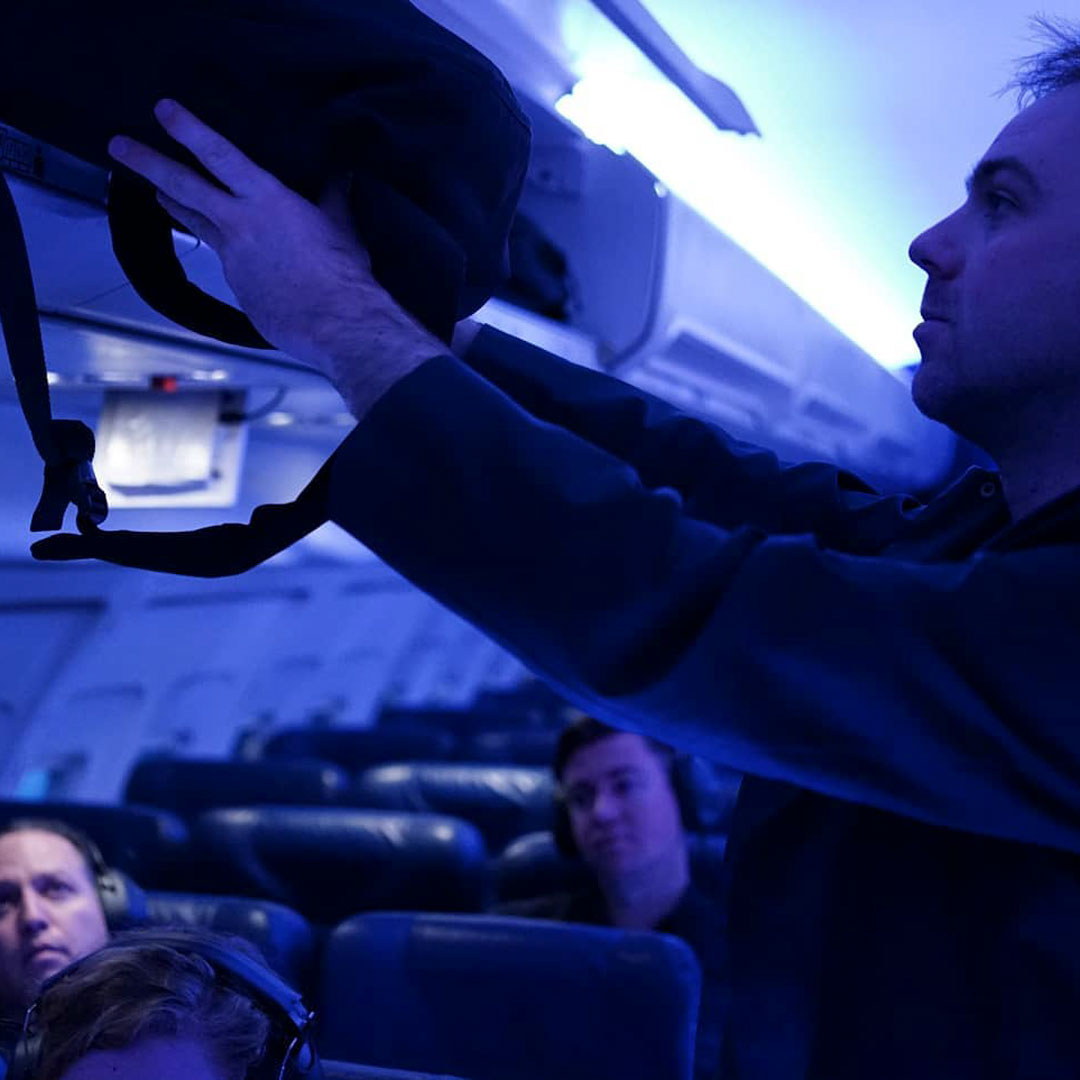 Then the lights dim, and the audio starts.

I’ll try not to give away everything that happens next. The real value of FLIGHT is surprise, and if I explained everything that happened inside that shipping container, you might not get your money’s worth. Suffice to say that people with genuine flying phobias—in all honesty—should probably not do this. FLIGHT is scary in a way Séance wasn’t, because Séance took place inside a haunted gothic mansion, and our brains aren’t really programmed to believe haunted gothic mansions. We don’t make them real in our minds.

But most of us have experienced air travel before, so when the lights flicker off and you’re plunged into blackness, and the cabin starts to rumble and vibrate, and Darkfield’s incredible binaural headphones play the sonic boom of a jet engine, and you feel the little jolt of wheels over imaginary tarmac, your brain has no trouble making it real. At one point I swear I felt us bank to the left. My ears almost popped.

“In most instances, vision is our leading perception. In the dark, we can start with the sound and create environments and characters and to allow the audience to create visuals for themselves, in their imaginations.” explains Darkfield creator, David Rosenberg.

‘Sound environments’ is a good way to describe what Darkfield actually make. Their binaural audio is recorded on two microphones, positioned to represent our human ears. This creates the illusion of lifelike, three dimensional sound. Sound with direction. During FLIGHT, you can hear the staff running up and down the aisle next to you. You can hear the drinks trolley jangle past and the kt-sssssss of a Coke can. You can hear the crying baby three seats back, slightly to the left. This realistic audio is what makes the next bit so terrifying.

FLIGHT claims to “explore the Many-Worlds Interpretation of quantum mechanics.” There was some stuff about Schrödinger’s Cat in there, and musings on the fragile nature of reality. To be honest, quantum mechanics aren’t scary. What’s scary is experiencing a very realistic plane crash in total darkness. Thanks to FLIGHT, I now know exactly what I would do if my plane plummeted into the ocean: I would grip my thighs very tightly and shut my eyes and wait for the screaming metallic noises all around me to stop. Not very useful, perhaps. But at least I know.

When the production finishes, FLIGHT’s cabin lights come back on, and there’s the familiar clack of seatbelts being unbuckled. It turns out fake planes and real planes share one more thing in common: people can’t wait to get their overhead bags. For god’s sake, I think to myself, They haven’t even opened the doors yet…

Flight sound a bit too full-on? Here's everything else worth doing in Melbourne right now.