Here’s Your First Look At The All-New Espy

Hotel Esplanade has been an icon of St Kilda since it first opened back in 1878—and after three long years lying dormant, it’s about to pick back up where it left off and become the icon St Kilda needs it to be again.

Back in July the Sand Hill Road crew—who are behind the likes of the Terminus Hotel, Prahran Hotel, Waterside Hotel, and more—announced massive plans for the boarded up Espy. The plans were ambitious, and sure, there were some who suggested that perhaps The Espy’s soul would disappear quicker than a pint consumed in the Public Bar, but after checking it out in person recently I can assure you that The Espy’s soul is still very much intact. 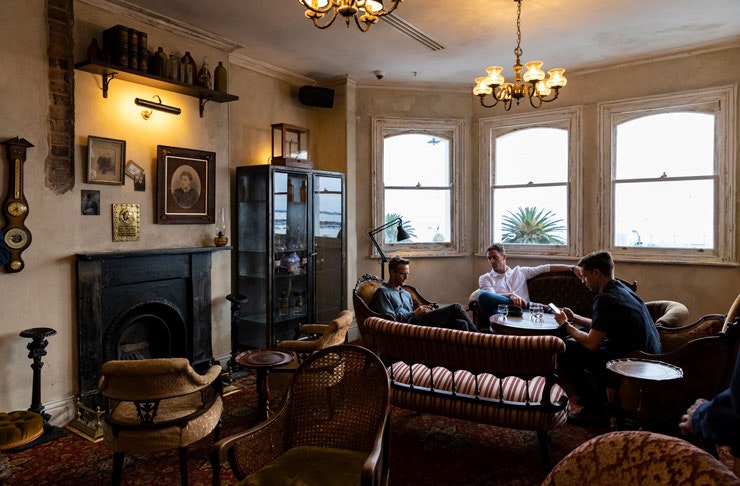 The Espy's new cocktail bar, The Ghost Of Alfred Felton.

Taking over an icon of the Melbourne pub and music scene such as The Espy burdens you with a great deal of responsibility. Thankfully, we know from experience that the Sand Hill Road crew know exactly what they’re doing. They’ve brought on local design studio Technē Architecture & Interior Design to get the all-important design work done. Technē have grabbed hold of key historical elements throughout The Espy and brought them to life in the new look.

One key inspiration was The Espy’s most notable resident—Alfred Felton.

Felton was a wealthy entrepreneur who made his fortune selling medicine to those sucked in by the Victorian gold rush. He lived at The Espy for many years, and ultimately died there. The top level cocktail bar—The Ghost Of Alfred Felton— pays homage to his life, but more on that later.

“The Espy has always been our ultimate pub dream” says co-founder of Sand Hill Road Doug Maskiell who took us on a tour through the hallowed rooms and hallways. “We know we’ll never truly own The Espy—that title belongs to the many thousands of people who have walked its staircases before us, and the many more thousands to come”.

There’s a lot to cover with this massive renovation, so let’s break it down a bit. 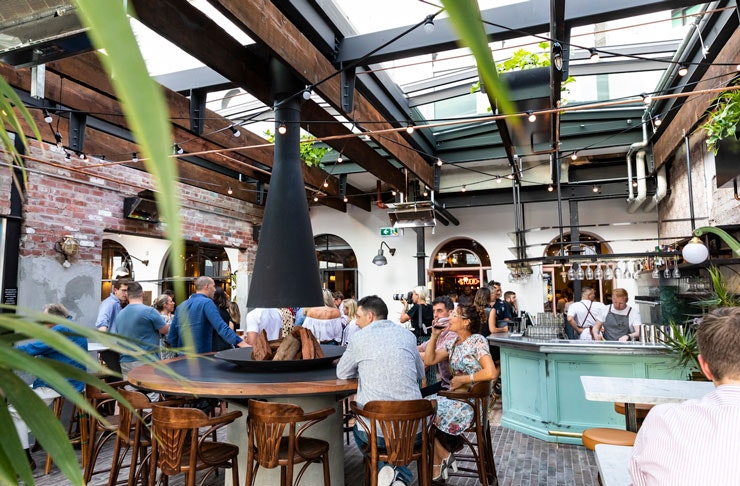 “There’s something about this hotel that captures the imagination like no other” said Doug’s fellow co-founder of Sand Hill Road—Tom Birch. “These are the things we were determined to keep at the forefront of our minds as we conceived the look, feel, and spaces of the new Espy—age, grandeur, history, arts—and respect for what it took to keep her alive all these years”.

The front of The Espy still looks the same. Most may not know that in fact the stairs at the front and their roofed area was actually added in the 1920s. This is now essentially a beer garden.

An enormous retractable glass roof now covers the area, which allows you to really take in the original hotel façade as you ascend the stairs. The windows that give amazing views down St Kilda Pier and out onto Port Phillip Bay have been replaced, and are now able to be opened to let the sea air flow in during the warmer months. Not just for summer though, the beer garden is also equipped with gas heating, and a central wood open fire which will keep your outsides warm while you keep your insides warm with something from the lengthy bar. 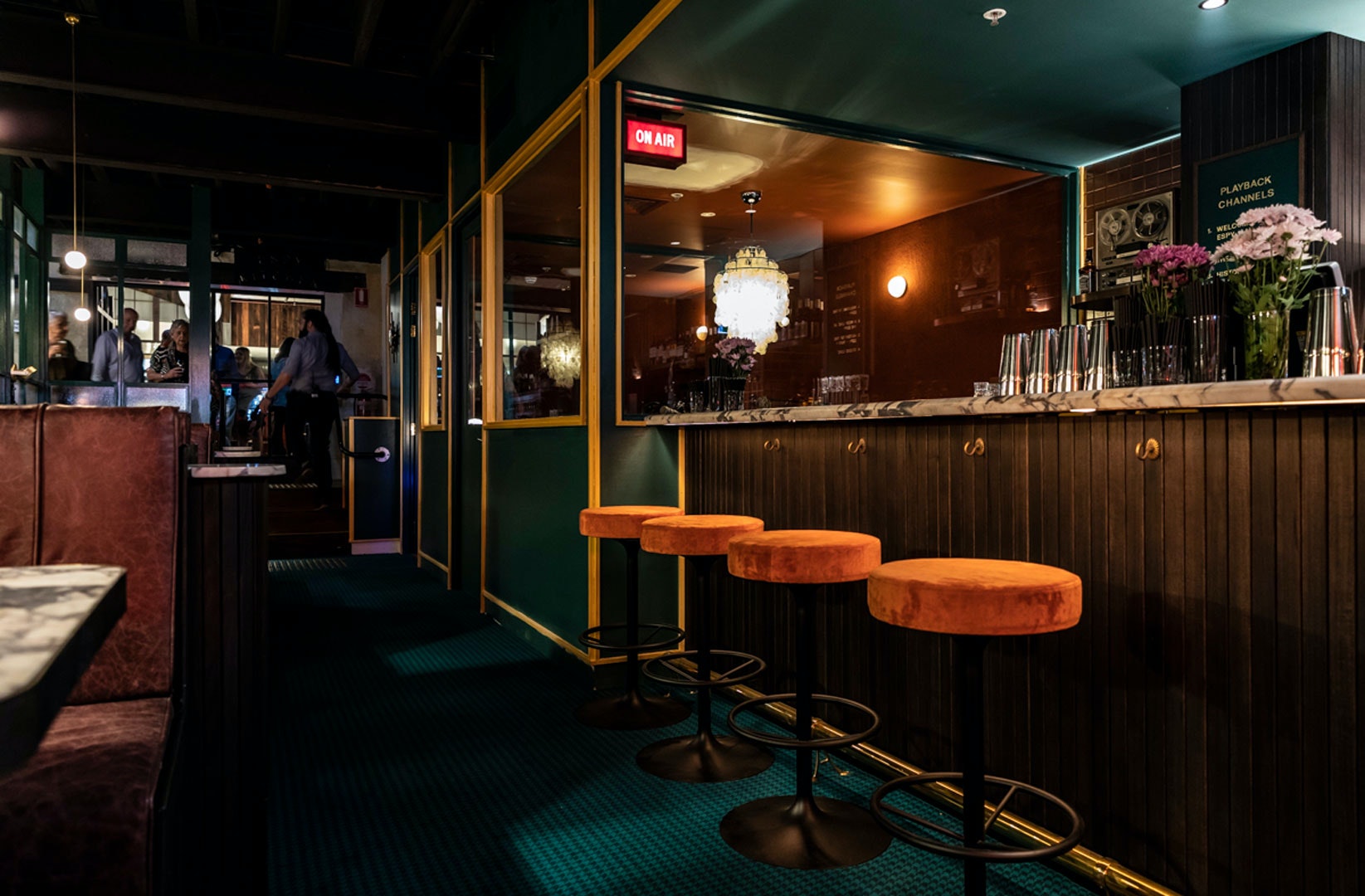 The Espy’s 140-year-old grand staircase is still there and looks as good as it ever has. The floorboards are all still original, and feel as much. There’s the 70s-inspired Studio Bar—with fully kitted out podcast studio attached—out the back of the main bar which feels comfortable and cosy, and if you venture further towards the back you’ll find the Espy Kitchen—a former loading dock that is now the engine room of The Espy’s food offering which features wall adorned with wine barrels.

Upstairs at The Ghost Of Alfred Felton you’ll find three distinct areas which reflect parts of Alfred’s life, all wonderfully styled with antiques found all around the world by the Techne team, Sand Hill Road team, and stylist Eleisha Gray.

The Food (And The Drinks)

At the heart of The Espy is the Espy Kitchen and the man at the helm of it all is Ash Hicks—who comes from Circa, The Prince and Brisbane’s The Buffalo Club—who has a team of 60 fellow chefs churning out dishes that will get your mouth watering.

Snacks such as the Espy crispy bug roll, spiced lamb flatbread with yoghurt dressing and beef tartare with potato crisps will keep punters in the bars happy, while mains like slow-roasted wagyu, pork chops and baby snapper all cooked in the custom-built charcoal rotisserie and grill will be absolute standouts. 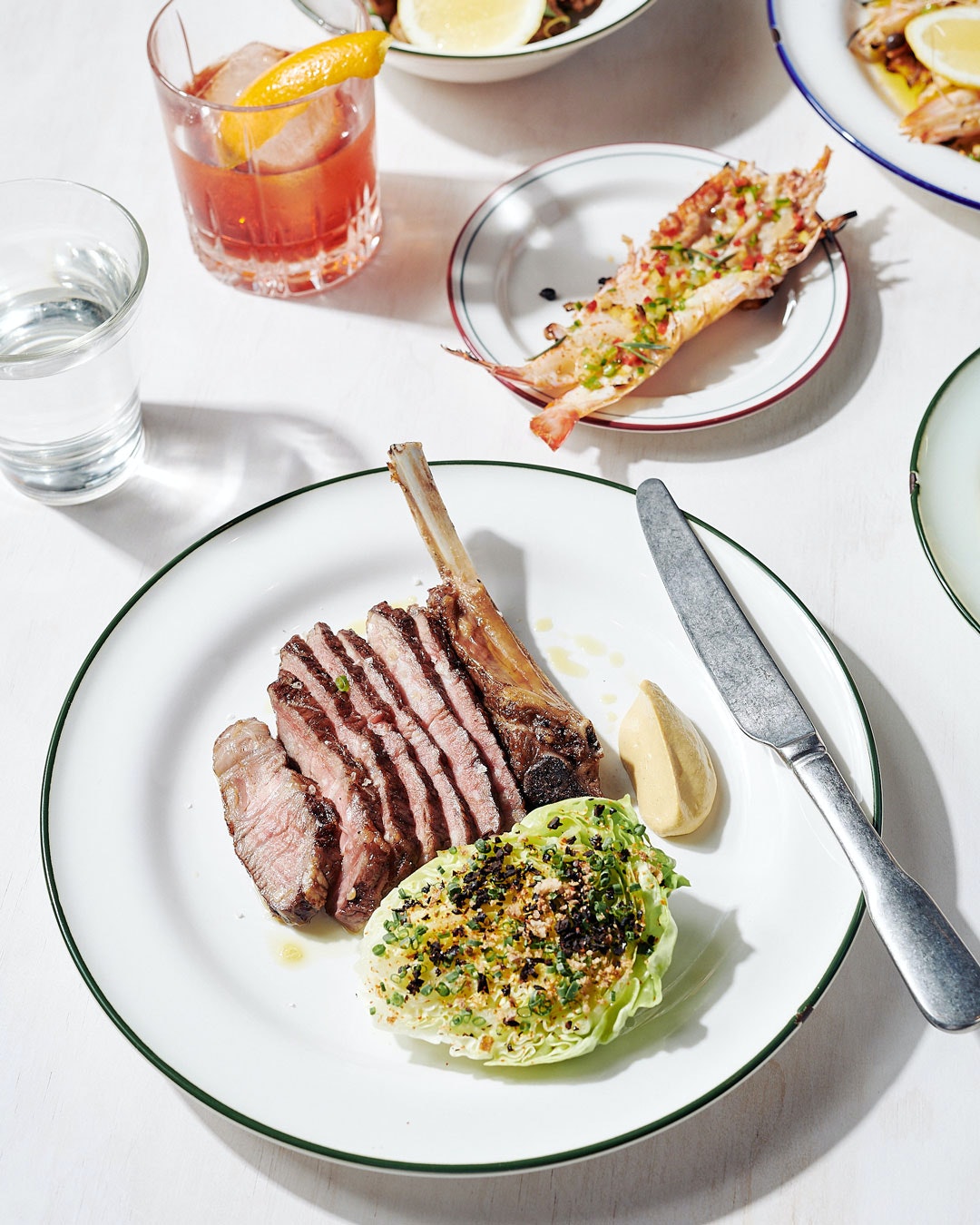 Pizza ovens are a big part of the new kitchen and the 72-hour fermented pizza dough using South Australian stoneground flour will make be a big hit for pizza lovers.

Pub classics like market fish and chips, cheeseburger and the chicken parma are all served with chips and salad as you’d expect from The Espy.

In the 500 Days Of Summer, you might notice a Four Pillar gin that you can’t find anywhere else—that’s the Sticky Carpet Gin—a gin that was made in collaboration with the Sand Hill Road crew and will only be available at The Espy.

Beer-wise you’ve got unpasteurised Carlton Draught, Balter XPA, and a range of other beers that will rotate on the taps in the main bar.

As you’d expect from Matt Skinner, there’s a great range of wines, “I want the (wine) lists to be exciting without being too challenging, accessible and without being dull, and diverse enough that there will be something for everyone. But most of all, I want the lists to make you thirsty”. 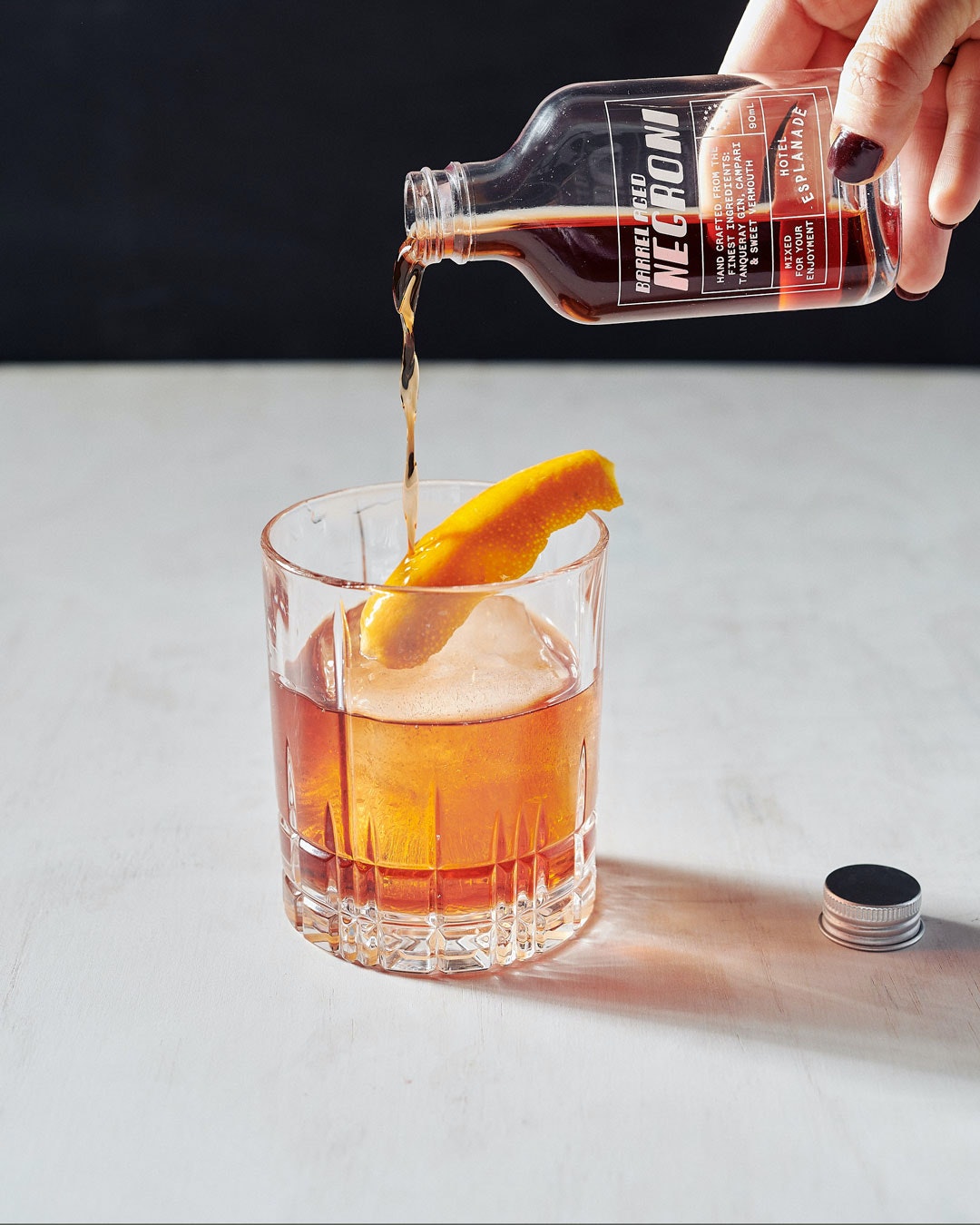 Kevin and Matt have also been developing a programme of aged barrel drinks, with spirits and cocktails made on site in 28L custom-made barrels. The Espy Negroni is one of those. It’s made in American oak wood barrels before being treated with Tawny Port for two months, aged for four weeks, and then bottled on site.

Well, it wouldn’t be The Espy without the music.

Earlier when I mentioned that the soul of The Espy had been retained, there’s no place that exemplifies the soul of this hotel than the famed Gershwin Room.

The Gershwin Room has hosted local and international rock legends in the past, and that won’t be changing anytime soon. Having now stepped inside the room amidst the chaos of a construction site, the room is just as it was when The Espy closed its doors back in 2015—with the addition of a new sound system and air conditioning.

This iteration of The Espy will actually feature three stages, The Gershwin Room, the Public Bar ‘basement’ which will showcase local up and coming artists for free, and there’s also a stage in front of the grand staircase where you’ll find solo singers and duets.

The Espy’s artistic director Janenne Willis is looking to bring a cultural programme to the pub. The Gershwin Room will host dance classes for adults, and kids, and also be open as a space for artists to hire every Monday.

“In grande tradition of The Espy, our arts program will be vibrant and diverse, much bigger than any one headline artist or show” said Willis, “Live and experiential at heart, we want to use art as a tool to elevate the important conversations of our times, all in the welcoming context of a non-traditional arts space”. 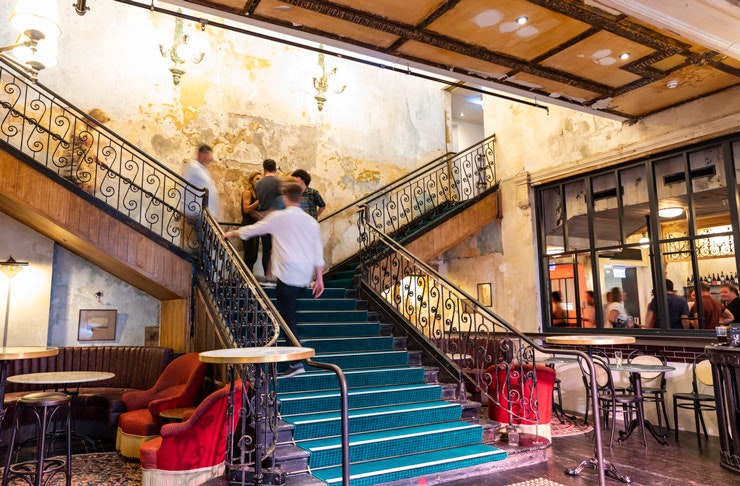 The Espy will open to the public on November 23 and is open 11am until late Monday to Friday, and from 9am on Saturday and Sunday.

We’ll bring you further coverage on the upstairs Cantonese restaurant Mya Tiger, and top-level private cocktail bar The Ghost Of Alfred Felton once the venue is up and running.

St Kilda is changing right before our eyes, we dove deep to see what the locals think about it all. Read about why St Kilda is making a comeback here.