Meet The Team Who Want To Build Skyfarms All Over Melbourne

Earlier this year a massive project was announced on the banks of the Yarra. It sounded like something from the future, a farm occupying the roof of a tower in Melbourne’s CBD, one that will take up around 2000-square metres of space, and is expected to produce five tonnes of producer per year.

But, this isn’t the future, this is happening right now. Melbourne Skyfarm is being put together by the eco-geniuses at Biofilta and is projected to open in 2020.

We recently caught up with Brendan Condon, Director at Australian Ecosystems, the business behind Biofilta.

How did you land on this location for Melbourne Skyfarm?

Our two Melbourne based companies, urban farming company Biofilta and Cirrus Fine Coffee—a specialty roaster in Port Melbourne—have been working on developing and testing low maintenance, productive, self-watering pop-up farms that can be built quickly in any location, and that can receive composted food waste and coffee grounds to grow food and help Melbourne create a circular economy.

We became aware of this large rooftop car park space in the city overlooking the Yarra, and enquired whether we could build a pop-up farm, that also includes urban habitat, classrooms to teach students about sustainability, a café and conference space and design hub.

We were kindly given permission by the Melbourne Convention Exhibition Centre and we’re now preparing to build out the project in 2020 and received a $300,000 kick starter grant from the City of Melbourne Urban Forest Fund to assist the project. 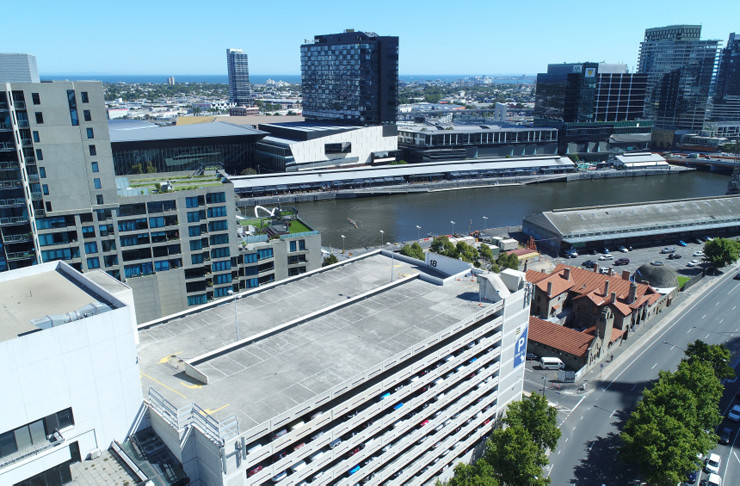 What are the main challenges in building a farm on a rooftop?

Developing the wicking bed urban farming modules that are the centrepiece of the farm is definitely the biggest challenge.

Wicking beds are gardens that hold water in the base, and the plants reach down for the water. This makes them very water efficient and eliminates most weeding and maintenance—ideal for time-poor urban farmers and city dwellers. We took around 2 years to complete the designs and are now mass-producing these pop-up farms here in Melbourne, and the wicking beds are made out of food grade waste stream plastic we are diverting from landfill.

With all of that design work out of the way we can now build the farm element of Melbourne Skyfarm within a week—it all comes together as modules that click together.

You've been running a pilot site in Port Melbourne, how's that been going?

The pilot site here at Cirrus Fine Coffee occupies 2 car spaces and receives composted coffee grounds and food scraps from the roaster, the staff kitchen, as well as waste stream organics from the South Melbourne Market.

We set a goal to grow 150 kgs of fresh produce from each car space within 12 months. 150kg per annum of fresh produce or 400 grams per day is the global target for a healthy adult according to the World Health Organisation—and this is why we adopted this target. We met this target in 5 and a half months!

What are your future goals for Skyfarm and beyond?

We have developed world leading “food growing architecture” —food-growing systems that can easily integrate into modern cities and urban form that enables us to use spare spaces such as rooftops, vacant walls, backyards, terraces, laneways, public spaces and car parks to grow food.

In future, we want to see our cities become food producing powerhouses where we divert our valuable organics away from landfills and divert this to urban farms in schools, communities, businesses and backyards, and use it to grow a huge amount of food within our city limits.

We want to see thousands of similar projects in cities and communities right across Australia and beyond.

How can the public get involved to help initiatives like this?

Become part of the urban farm movement—follow Melbourne Skyfarm and register interest on our website as we will become a hub for urban farming, and support organisations like 3000 Acres who are helping develop urban farms and community gardens everywhere.

Lobby your local council to join the many local councils who have separate organics bins and are composting food waste and diverting this back to farms.

Want to learn more about what you can do to help the environment? Check out our Sustainability section.