Where To Get The Best Burgers In Melbourne’s North

Melbourne’s love affair with a good burger shows no signs of slowing down. And the good thing about that is you never have to travel too far to find one. Melburnians are never really more than 10m from a delicious double stack (the same is apparently true of cockroaches).

So let’s look north today. The northern suburbs expand from Greensborough through to Whittlesea and down back through Moonee Ponds (a bit of a shock to those who feel, once you pass Brunswick, Melbourne becomes some sort of unexplored wilderness). The North is actually very lucky in terms of quality burgers. There’s a higher burger-per-capita density than almost anywhere else in Melbourne.

So if you want to know where to go for the best burgers in the North, check these out:

The shop front may be new, but it’s an old hat on Melbourne’s burger scene. Beatbox Kitchen has been roaming the city’s food truck parks for many years, and it really was a no-brainer when they parked the car and opened their own bricks and mortar joint. It’s sometimes hard to keep up with where the trucks are at, so knowing exactly where to get your Beatbox double-stack fix every day is a blessing.

Established in late 2016 and plonked right across from Moonee Ponds Station, Burger Kitchen’s location is all convenience. The BK special is the burger of choice here: beef, chicken, bacon, melted cheese, fries, tomato, lettuce, onion, BBQ sauce and lashing of aioli. Absolutely ridiculous. Just look at those ingredients and tell me you’re not craving a burger right now.

This unsuspecting cafe down a side street in Moonee Ponds is a classic case of books and covers. It doesn’t look like much, but put one of these bad boys in your mouth and tell me it’s not one of the best burgers in Melbourne. Darling Street does an in-house hot sauce to complement its char-grilled patties. It’s a café, which means they only have a couple of burgers on their menu, but they know what they’re doing. We recommend the double cheeseburger if you find yourself in Moonee Ponds.

Any Essendon local knows that a Burgers Of The North article wouldn’t be complete without Demazzi. Known for their stone grills pre-2015, they decided burgers and shakes were a good addition and switched up the menu slightly. And what a move it was! Demazzi took the #1 spot on my personal burger list for 2016, and that is no mean feat.

Demazzi serves burgers, shakes, stone grills and desserts and has a legion of followers to match. If you want to dine here, book ahead and go early as they sometimes sell out of stock.

You’ll find this one inside Greensborough Plaza. Flame 400 should really drop the café off their name: this place is all about the burgers, shakes, ribs and wings. If you’re heading to Hoyts Cinema, this is where you should be eating pre-movie. Go hard or go home: partner your burger with ribs, wings and a loaded shake! 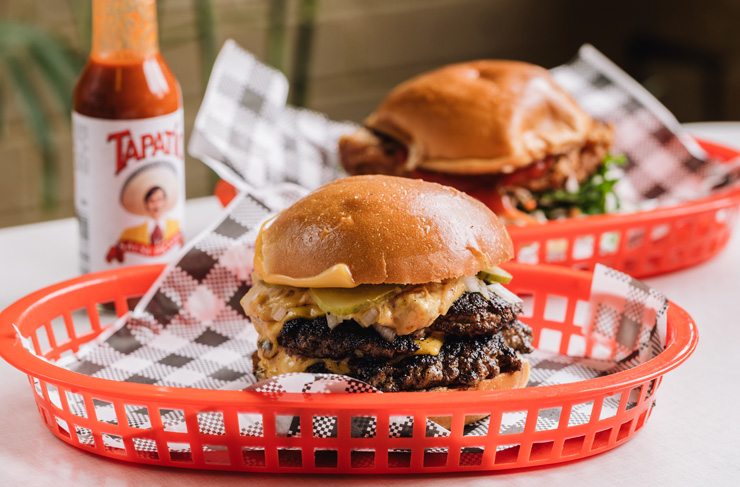 There really isn’t a lot to fault with this burger. Believe me, I’ve tried. Everything works perfectly: house-made buns, house-made pickles, a perfect beef blend and a secret sauce that’s absolutely mouth watering.

When things are done right, they are just done right and Juanita Peaches knows what's up. And so they should—the owner also runs Beatbox Kitchen, Taco Truck and All Day Donuts, which have obviously taken the city’s food truck scene by storm.

Tullamarine may not be your first guess when it comes to Melbourne's best fish n' chippery burgers, but wait till you see the bad-ass stacks they're serving at Hide n' Seek. You can't miss this place—there's a huge purple kraken erupting on the outside wall. Wander in an order a double patty beef burger, then kick it up a notch by adding one of their hand-sculpted potato cakes. Reeee-diculous.

After a second visit to Kustom Burgers in Thornbury, and after sampling both their beef and fried chicken burgers, I have to admit, these guys are onto a real winner. The fried chicken and beef mix is the way to go at Kustom (sounds avant-garde, but trust us, it works). Here’s what you do: go the F250 burger and exchange one of the beef patties for fried chicken. Thank us later.

If you didn’t know to look for Laurie Dee's, you could easily miss this place. It’s tucked outside Epping Plaza in a little cul-de-sac pocket, and it took me a good 20 minutes of walking around in circles to find it. On that note, this place probably does the best smash patties in town, with crispy edges and soft-in-the-middle the beef actually melts in your month. If you can find Laurie Dees, we highly suggest you give it a try. Maybe take a GPS with you just in case.

It’s only been open less than a month, but Masters of Burgerology have hit the ground running with some quality burgers, fries and shakes. It’s great for the Melbourne Uni students too, since there’s a 15% discount if you flash your student card. Bargain. Although they’re new kids on a very crowded burger block, the patties and stacks coming out of the kitchen are absolutely top notch. Masters of Burgerology gets awarded a High Distinction in my books.

A café I stumbled on by accident. Most people go to Northern Perk for the NP Tower—a huge breakfast dish that has gone wild on social media, but not me. I saw a burger on the menu and just had to give it a shot. Northern Perk gets my vote for Most Improved: over the months they’ve taken the feedback of their customers on-board and are now pumping out one of the best burgers in town. Start with a giant stack…and finish with the Nutella pancakes.

All Royal Stacks needs to do to make our burger lists is to keep opening restaurants. They’re that good. They started in the CBD, popped a second store in Brunswick, and recently moved to Chadstone. Wherever they go, I’m going to keep eating and rating them. One of the more hipster-mainstream entrants on my list, but they fully justify the hype. 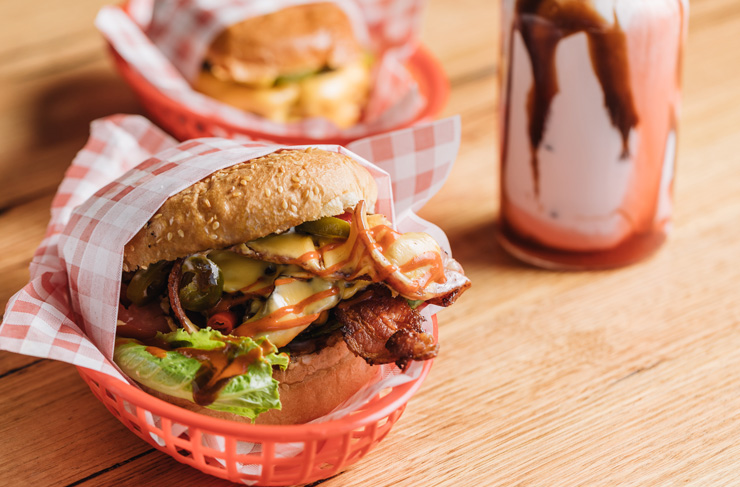 It’s a truth universally acknowledged that getting a burger for less than $10 in Melbourne is bloody difficult. And that was one thing Anna Rogers and Gaby Zakharia wanted to remedy with their Brunswick East burger bar, Pickle. Cute name, and some banging burgers. Our pick is the ‘3057’—a hefty stomach punch of mac n’ cheese, double beef, double cheese, bacon, tomato, beer pickles, lettuce and truffle mayo. You’ll be rolling home after this thing.

Not only does Sonny’s have the best fried chicken in Melbourne (we’re calling it) but the burgers here are on another level. Seriously. It doesn’t matter if you pick beef or fried chicken, everyone’s a winner. There are no surprises at Sonny’s, what you see is what you get, and you can take my word for it, what you get is gooooood.

If you remember Dude Food Man, then you may recognise the head chef at Straight Six. Johnny has made a return to the burger industry and is heading-up this horse-themed burger joint. With burgers named after famous horses like Makybe Diva, Pharlap and Think Big, you’re sure to back a winner at Straight Six. Add mac n cheese, get some loaded fries and down it all with a milkshake. Odds are you’ll have a ball.

Want to know where to get Melbourne's most OTT burgers? We've got 'em.

When Brennan's not writing articles about burgers for The Urban List you can track him down at Burgers of Melbourne.