In the city of Melbourne there’s a suburb called Prahran. And in that suburb there’s a Mexican restaurant. And within that Mexican restaurant you’ll find a floor-to-ceiling wall of gin bottles. An apparent dead end. But behind that wall, carefully concealed, is one of the best new bars in the city. A secret gin speakeasy with an Aussie bush twist, built from corrugated iron and overhung with eucalyptus leaves.

We can’t help it—we still get a tingle every time we step through one of these Narnia-style portals. We get it when we open the fridge door to Jungle Boy, nodding to the guy behind the sandwich counter like we’re in a James Bond film. It used to happen with Fall From Grace (even if we accidentally wandered into the men’s bathroom on the first attempt).

As you enter Queen Of The South (an excellent Mexican restaurant btw), you’ll spot a wall stocked with boutique gins. Balcombe, Artemis, Melbourne Gin Co etc. Go ahead and give the right-hand shelf a tug. It’ll swing open to reveal a pint-sized timber space, hung with antique mirrors and a canopy of native leaves. The bar itself looks like a weather-beaten outback patio, all forest green weatherboards and frosted glass shutters.

This used to be a dead space, cut-off from the main restaurant, open to the elements. Somewhere you’d store odds and ends, or maybe keep the bins. Owner and Head Chef Malcolm Williams wanted to make use of the space, while at the same time offering something completely unexpected. Not easy when your hypothetical bar measures about 8m square. He came up with the concept of a gin speakeasy, but one that championed local, Australian gins—and only those.

“It’s the only gin bar I know of that showcases nothing but Aussie gins,” he says. “When we had the idea we did a bit of research and discovered there are over 110 gin producers in this country. Some of them doing really cool stuff.” 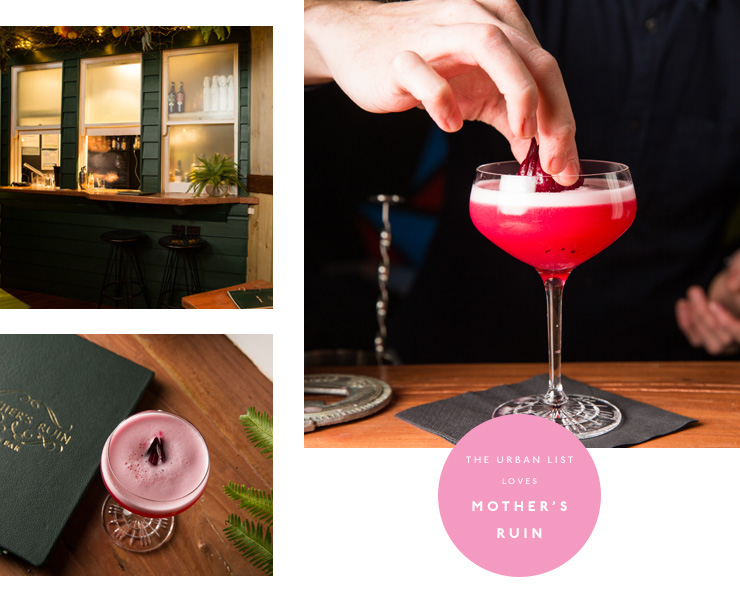 Take the Bush Bramble (Morton’s spin on the cocktail classic). He’s removed the traditional lemon juice, sugar and Chambord, and replaced it with Lemon Myrtle sugar syrup, Quandong Liqueur and a garnish of Sunrise Limes.

The Bijou is another one that hits your nostrils like a botanical supernova: Morton has sourced an aniseed and eucalyptus liqueur from Queensland and paired it with savoury gin from Sullivan’s Cove (The Hobart #4, if you’re playing along at home). This one’s proving very popular with the late-night hospo crowd.

And that’s what this place is, a gin-drinker’s gin bar. Somewhere you could happily sit and chat botanicals for 45 minutes, while the wall-mounted LED gin cabinets morph from desert umber to cobalt blue. There’s even a little ‘Lovers’ Corner’, built for two. Williams was going to add a curtain for extra privacy, but worried that might encourage some dodgy behavior. Fair call.

The best thing about this place? It’s got a hook, but not a gimmick. Williams and Morton have committed to the theme 100%. The corrugated iron on the back wall was sourced from an early 20th-century sheep station. The rough-cut timber tables were knocked together by hand. The paintings on the walls are all Aussie pastoral scenes—stockmen and rangers, sitting on horses and fording streams. You can’t really fake this stuff.

It’s nice to find a secret bar that doesn’t hang its success on ‘secretness’. The really interesting thing about Mother’s Ruin isn’t so much the search for the front door, it’s what you find when you get inside.

Want to learn a bit more about Mother's Ruin? You can check out their FB page here.