A few heads turn as it lands on our table. A huge icy fish, caught in a glass bowl, one sugary dorsal fin protruding from its back, Jaws-style.

We’ve just ordered the kakigōri from Supernormal Canteen, although, now that it’s here, we’re not entirely sure what it is. Some sort of bizarre Japanese snow cone? An elaborate Andrew McConnell practical joke? One of the team takes a spoon and gives it a tentative poke, as if expecting it to spring to life. Just when you think Supernormal is out of surprises, you get this thing.

One of the waiters is kind enough to explain. Kakigori is a shaved ice dessert, he says, popular in Japan, particularly at festivals when it’s hot. Chefs carefully carve flakes of ice into the bowl, layering as they go with various syrups or flavourings, building the kakigōri higher and higher. The texture is a bit like a snow cone, but lighter, fluffier, more delicate. More like whipped air. Eating it feels like catching a snowflake on your tongue (albeit a snowflake coated in crème caramel and condensed milk). 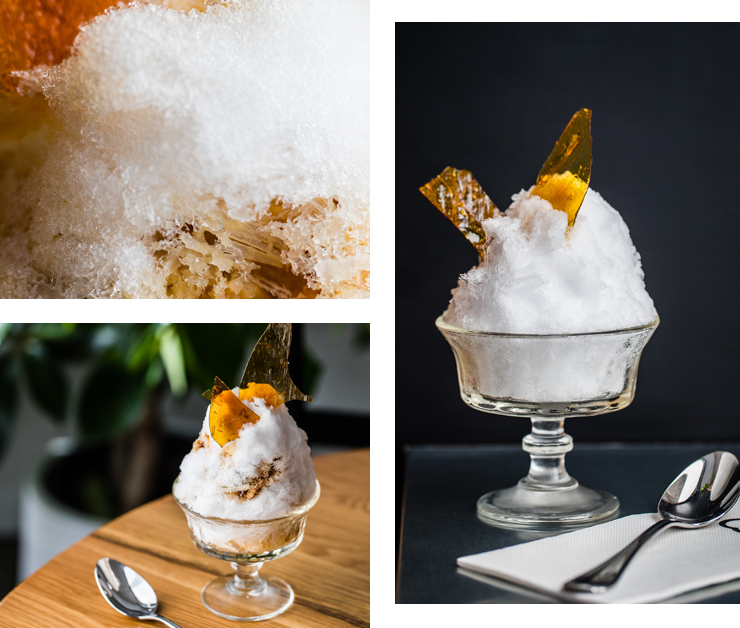 We hunted around (well, Googled) but we couldn’t find anywhere else in Melbourne making this stuff. At least not like this. But that’s not entirely surprising: McConnell has always been one step ahead of the curve.

The concept for Supernormal Canteen was pretty simple: an authentic Japanese yakitori bar on Fitzroy St. A space apart from the Supernormal mothership, back in Flinders Lane. And the yakitori grill is definitely one of the first things you notice when you push through the hanging black noren curtains: a huge charcoal pit, all smoke and splutter, where chefs are char-grilling chicken skewers and tsukune meatballs, spliced with spring onion.

But although the styling is different, the place still FEELS like Supernormal. A smaller space, a little moodier, more intimate, designed to appeal to a slightly edgier crowd. But the Supernormal bones are still there. That slick combination of concrete, blonde timber, black metal and cutie-pie branding. (Just as an aside, McConnell needs to branch out into homewares. That cartoon cloud on a pillow or doona would look mint.)

Like Supernormal HQ, the pan-Asian menu centres around shared plates, with a few larger dishes acting as table-stopping centrepieces. Here’s how you do it right (take notes). Start with the Typhoon shelter school prawns, fried to a crisp and covered in a pile of batter shards. Then order up a plate each of the house-cured Wagyu brisket, the prawn and chicken dumplings with spiced brown vinegar, and the Shiitake mushrooms with cime de rapa and anchovy butter. The famous lobster roll has made the journey to St Kilda too, so you’d better grab one for old time’s sake. 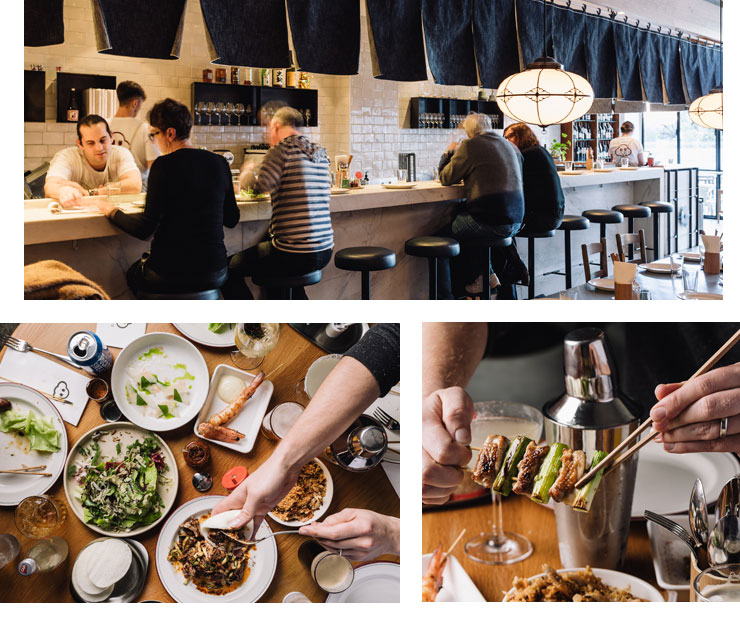 For the larger plates, it’s hard to go past the DIY northern-style cumin lamb with pillow-soft pancakes and pickles, although the slow-cooked short rib with burnt honey and black vinegar is also drop dead delicious. Sweet and sticky, with just the right amount of tang.

And would we like dessert? Umm...yes please. Which brings us back to the kakigōri. We feel you have to get this if you’re visiting the Canteen. It’s too unusual not to try.

Supernormal makes theirs by freezing Capi mineral water into large blocks, which are then shaved by a Japanese electric ice-shaver. The mineral water freezes better than the stuff from the tap, resulting in a drier ice, and less risk of slush. Canteen chefs then take a classic crème caramel recipe and layer this at the bottom of the glass. On goes the razer-thin ice shavings, interspersed with layers of dulce de leche and McConnell’s signature popcorn powder. Salty, sweet, icy goodness. And unlike anything else we’ve eaten this year.

This just in: Supernormal Canteen are now doing Friday lunches from 12pm. Get all the info here.