Three years ago, Michelle Luckman brought forth into the world her fragrant, exotic artisan icypoles – Lucky Pops. With the help of her vintage carry tin, reserves of dry ice and a bunch of creative friends, Michelle has cemented her place as Melbourne's modern day culinary super hero – balancing her life as a high-school art teacher by day, and attending to her frozen passion by night. Constantly experimenting and endlessly dedicated to her poles, she is our Lord and saviour when it comes to making sure the citizens of Melbourne beat the heat, in the form of a lychee and rose pop, mixing it up with mojito, or her latest creation – a banana, mascarpone and blueberry pop. Best of all, there's a vegan range, and all Lucky Pops are egg and nut free!

The Urban List spoke to Michelle about Lucky Pops, asking how on earth she does it all, what she plans to do for the future of the icypole industry, and she lets us in on how she scored a boyfriend who chefs at Mamasita.

TUL: So where did the idea for Lucky Pops come from?
Well, I actually saw it online about three years ago. I was looking for icecream recipes
and noticed that there were a lot of icypole places in the States, but nothing really here. A couple of weeks later (isn't that always the case when you start noticing something?), a few popped up in Sydney, but still nothing in Melbourne. So, simply put, I was just like 'maybe I should be the one to start up an icypole business in Melbourne!'

TUL: Had you been working in the culinary industry prior to Lucky Pops?
No, not at all – I'm an art teacher! I had absolutely no background in cooking or anything like that, other than the fact that I really like to cook. I mentioned the idea to a couple of friends at a bar one night and they just said, well, what have you got to lose? I figured the worst that could happen was that I lost a couple of hundred bucks making the icypoles and carting them around, so really there was no question in the matter.

TUL: So how did you first start introducing the icypoles?
I started by going around local parks, festivals and the like with a vintage carry tin I found online that they shipped from Florida. One of those ones that hooks around your neck and you walk along with it on! A friend of mine made the inserts for the pockets of dry ice to keep them frozen, and another friend did all of my branding. From there, I was good to go! It went amazingly – I sold out of about fifty poles in fifteen minutes on my first run.

TUL: What kind of icypoles were you selling to begin with?
Well, initially I made the same flavours, but with chunks of fresh fruit and herbs in them. When we started to sell a lot more this just became way too time consuming and the puree I think tastes even better. But, yeah I haven't changed anything that I'm doing the whole time; I'm now just being a little bit more experimental with flavours.

TUL: You mentioned a friend of yours did your branding, who was that?
Sara Hayat. She is my bestie, and also an amazing graphic designer. She did all of my branding, and now I have such a recognisable face. It's amazing, she even handpainted all of the watercolour fruit on my logo on the website. She's been doing it for so long, so she's really helped me become recognisable.

TUL: Do you cook at home a lot?
I never used to be so experimental, but now I definitely am. But my boyfriend's one of the chefs at Mamasita, so it's pretty easy to leave it up to him. But seeing as I only see him once or twice a week even though I live with him (they keep him busy!)… I'm so lazy after work, so I like to cook really nice simple dinners. Italian food – a lot of pasta. But when I'm procrastinating from marking students' work (shhh!), then that's when I make the really cool stuff. Cook up a storm. Spend six hours cooking...haha.

TUL: I bet that's when you brainstorm for icypole flavours too! What's the trippiest flavour combination you've made so far?
Probably the avocado and lime. So creamy and yum. So funny, it's the one I started with as well! When I was doing all my research for the flavours, I noticed that Brazil and Mexico are actually the icypole capitals of the world! So I was just looking into Mexican icecream flavours and avocado was one of the staples, jalapeno also makes a bit of an appearance as well. I tried to recreate that in the pineapple and chilli pop.

TUL: What are these ones that you've got here?
Well these are the new pops – the banana, mascarpone and blueberry pops. They are just the best colour as well!

TUL: How many flavours do you have on the go at any one time?
About five. When I first started, at the opening launch event, I had fifteen flavours. But it was way too much!

TUL: What would be the most popular?
Lychee and rose, toasted coconut, and strawberry balsamic and cracked pepper. 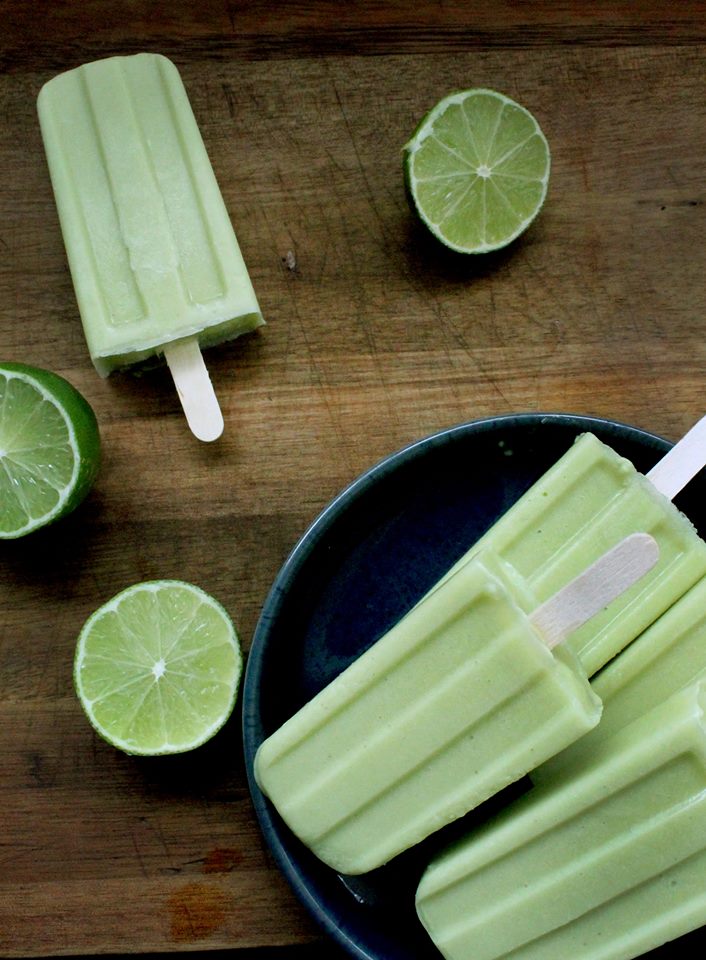 TUL: What are the hardest ingredients to work with?
Anything that requires a lot of prep work. So something like pineapple is a bit of a pain. Lots of chopping! Berries are easy. Lychees suck because you have to peel them.

TUL: Are there any flavours or techniques you really want to experiment with?
There's a couple that I'd like to try, like dragonfruit. But it's so expensive! Maybe something like mangosteen. Even some simple things, I haven't ever used orange before – so maybe even an orange, cardamom, then a really nice cream swirl through the middle of it.

TUL: Where do you get your produce from?
I alternate. My uncle is a market gardener. So whenever I need to put in an order he'll pick up everything from South Melbourne and Footscray at midnight, when the food producers are only allowed in, and get the top picks for me. For some of the more gourmet ingredients I'll try and find as many local producers as I can. So for honey I'll use Rooftop Honey; in the lychee and rose petal icy poles I've been getting roses from a farm in Gippsland called Tamsin's Table.

TUL: How about dietary requirements? Yes, no, maybe?
Definitely. All my poles can be available for people with dietary restrictions. I've got a range that is entirely vegan, as well as gluten and fructose free as well. I really like being able to provide for everyone and making them tasty as well! I don't think I'll put nuts in for the moment, as they're a bit iffy, and there's never been any egg in the mix either.

TUL: Have you done any with alcohol?
I have in the past, like a Pina Colada flavour, roasted apricot with vanilla vodka, a stout flavoured icecream… That one was super rich and creamy like an Irish Coffee. I want to play around with beer and fruit. I've been really keen to try to make a passionfruit and beer pop...

TUL: Where do you like to go for a beer?
Well, my boyfriend is also in a band and he plays a lot of gigs at Old Bar on Johnston Street. I really love going there.

TUL: Do you feel like you've learnt a lot over the past three years?
I've learnt so, so much. And even just looking at appropriate packaging places and sustainable packaging and different options around that. If it was my full time job, then maybe I would be interested in development, but it started as a hobby and I think that I want to keep it like that so that I still have the same passion and excitement in producing the pops as I did in the beginning. It's been so rewarding seeing how much everyone loves them, too!

TUL: Do you feel like you'll do many collaborations in the future?
That's the fun side of the pops that I didn't realise would come with it. I'm lucky because of where I live and my friends are all so creative, so that's really opened up a lot of avenues for me in terms of collaboration. I've always tried to collaborate with my friends as much as possible and focus on being on a creative business, rather than solely food focused.

TUL: I suppose that helps being an art teacher.
Definitely! For the St Kilda Festival, I collaborated with Brightspace Gallery which was so much fun. It was just a little Fringe event off to the side, but it was so much fun. I got to hang out at an art gallery all day which is what I love doing, and sell icypoles at the same time, which I love doing! I also did a filmmaking course.

TUL: Oh! The Gorman video?
Yes that's where Gorman comes in. I noticed in their latest range they had a whole lot of fruity prints, so I just sent them an email saying let's do a film and they just said yeah that sounds great, so they supplied all the clothes for the video and my friend's band did the music and we just filmed everyone looking awesome in Gorman spinning hula hoops and eating icypoles.

TUL: Ha, it's as easy as that isn't it.
It's amazing how much the Melbourne artistic community supports one another. I just want to have a bit of fun with my business, I'm not out to establish a monopoly. I want to be collaborative and do little side projects and fun things like that. I love having a business, but I'm not a crazy, full-on, business person!

TUL: Are there any other projects in the pipeline?
Yeah! I'm in the process of working with Padre coffee (of Brunswick East Project and Coventry Street) – they're going to supply me with coffee to make coffee icypoles! It's going to be an iced coffee pop dipped in white chocolate and covered with dehydrated raspberry powder. We're sort of tying down now what with the end of summer, and because I teach as well, it's hard to do it all year! So I'm trying to find a lot more stockists so people can have them all year round!

TUL: Where are you stocked at the moment?
I'm at Clay Fine Food & Health on Rathdowne Street – they're so beautiful, I love them. I will be at a place that's opening up in Warrigal called Stella's Pantry. I'm in the process of talking to a few other places as well. Padre Coffee of course will be happening, so stay tuned!

TUL: There's still not many people doing what you're doing are there?
No, not really. There's a few, but we're good. We speak to each other and make sure we don't cross over with events. There's no Queen of the icypole kingdom. A really friendly icypole community. Haha that sounds so silly.

TUL: To wrap it all up...what's your favourite icecream shop in Melbourne?
Gelato Messina. Without a doubt.