Where To Get Cultured In Melbourne After Dark

It’s March already (when did that happen?) and if you’re anything like us, you’ve probably already given up on the whole New Year, new me thing. But that doesn’t mean there isn’t time to get a little cultured and expand your horizons, etc. so you can at least attempt to be the best version of you.

And because we only want the very best for you, we’ve teamed up with Wilson Parking to bring you this neat little list of the best cultural events happening in Melbourne this March. They’re all on after dark, so you can’t use work as an excuse #sorrynotsorry.

Go with your mate (or a date) and don’t let the idea of parking scare you off because Wilson Parking totally lets you Book-A-Bay (yes, you can pay with Amex) and secure yourself a park, without the stress, before you even leave the office. Genius? Next-level adulting? Yes, and yes. 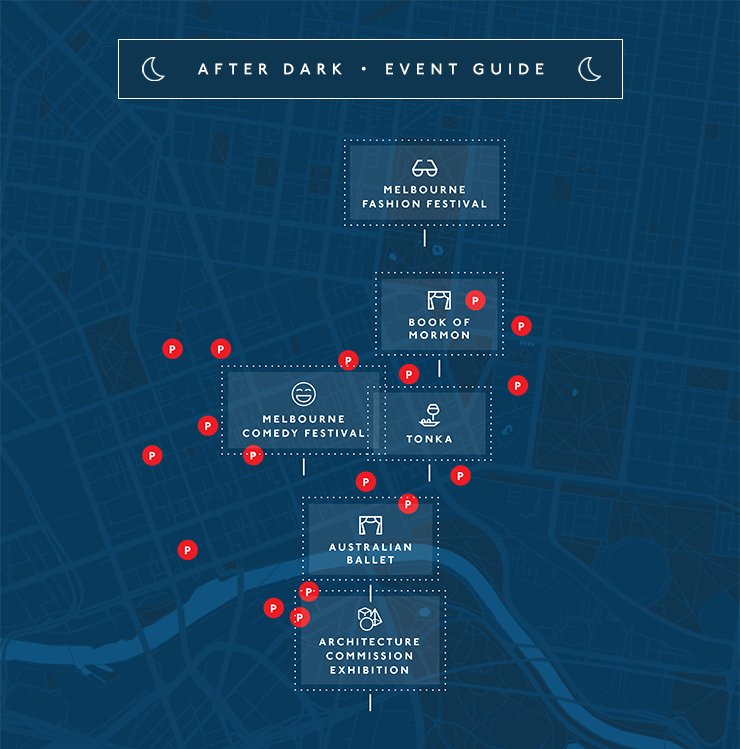 If you’re looking for a good excuse to get frocked up and be all ladylike/gentlemanly then get your culture injection at the ballet. For just over a week, the Australian Ballet will show off Faster, a contemporary ballet that’s all about the world of elite sport (think fast pace). Book-A-Bay at Southbank then treat yo’ self to a pre-show feast at one the riverside restaurants.

When: 17th to 27th March
Where: Arts Centre Melbourne
Cost: From $43
Where to park: Eureka, Southgate or Riverside Quay

Rub shoulders with the fash pack (they’re not that mean) and get amongst the Virgin Australia Melbourne Fashion Festival. For the next couple of weeks, you’ll have the chance to get up close and personal with some of the best designs and designers in Australia (think Dion Lee, Acler and KITX) because as we all know, fashion is culture.

When: 1st to 19th March
Where: Royal Exhibition Building
Cost: From $159
Where to park: 90 Victoria Parade

Summer might be over but that doesn’t mean the fun stops. Laugh the autumn days away and guarantee yourself bulk LOLs at the International Melbourne Comedy Festival. Even though you can Book-A-Bay nearby, don’t get there too early because you’re probs going to want to avoid the front row.

When: 29th March to 23rd April
Where: Various locations around Melbourne
Cost: Varies
Where to park: Galleria

The NGV Architecture Commission is an annual, open competition that asks architects to come up with innovative ways to activate one of Melbourne’s many community spaces. This year M@Studio Architects took the crown with playful reinvention of a suburban car wash that has to be seen to be believed. There’s a whole heap of cement, layered cricket netting, fluorescent light and yeah, go see it at NGV Friday Nights.

When: Now until April
Where: Grollo Equiset Garden, NGV International
Cost: Free
Where to park: Eureka, Southgate or Riverside Quay

One of the best ways to get some culture in you is to eat it. Seat yourself at Tonka for an Indian feast like no other and get educated in all things pani puri, curry and sambal (with a modern twist). Decked out with jars of bright spices and wire mesh, the menu focuses on street food flavours from all over India. We highly recommend you wear stretchy pants.

Where: 20 Duckboard Place, CBD
Cost: Depends how much you want to eat…
Where to park: 32 Flinder Street, Flinders Gate or Grand Hyatt

If you haven’t seen The Book of Mormon yet, you really do need to go get yourself cultured. No offence. Grab your squad and book tickets now to the most talked about show in town. The hilarious musical has won nine Tony Awards for a reason. Just sayin’.

When: Now until April
Where: Princess Theatre, CBD
Cost: From $50.80
Where to park: Parkade

Editor’s note: This article is proudly sponsored by Wilson Parking and endorsed by The Urban List. Thank you for supporting the sponsors who make The Urban List possible. Click here for more information on our editorial policy.