We’ve got some good news for all you fitness junkies: after-dark silent vinyasa disco yoga is coming to Brisbane tomorrow (15 May).

Fitness guru and founder of Flow Athletic, Kate Kendall, will be leading the class, alongside Sydney-based DJ, James Mack. It’s a sweat-packed three hour session, designed for people who feel a bit self-conscious about the whole ‘yoga thing’, or just want to try Downward Dog while listening to some phat beats (guilty). You can grab last minute tickets through Eventbrite here. 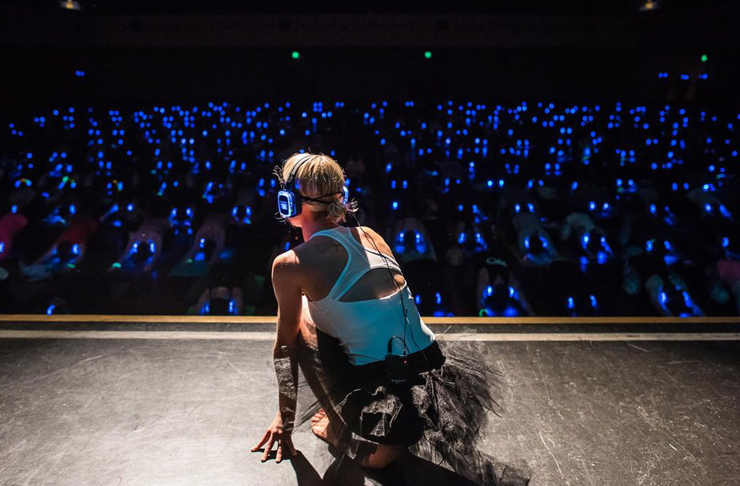 We wanted to learn a bit more about ‘after-dark silent disco yoga’, so we sat down with Kate and asked her: what is this thing? Are you the first person to do it? And how do those headphones stay on your head when you’re upside down in the shape of a pretzel?

How long have you been running these ‘disco yoga’ sessions? When did they start?

It had pretty humble beginnings. We always knew we wanted to create some different events—we’re big on creating community. Even though there are so many ways to connect these days, people still felt really lonely. So we started to do yoga gigs with a live DJ (which isn’t new, there’s people doing it all over the globe). We fit 50 or 60 people into our studio in Paddington, then moved up to the Paddington Town Hall. Then Silent Sounds approached us and ask for a chat. They’d designed these headsets that stay on your head during Downward Dog or inversion or anything, so we tried that at Paddington with our DJ James Mack. It really took off from there.

What do you want people to get out of this?

People describe it as this really intimate occasion: my voice in their ear and these beats going on. Some people realise, ‘Hey, I’m in this sea of yogis and there’s people all around me. I’m part of something big.’ Plus it’s very anonymous. There’s no lights, it’s after dark, there‘s lights on stage so you can see us up there, but you’ve got that privacy. You don’t have to worry about looking good or bad. I don’t care about you doing the perfect arm balance—I don’t think that’s what yoga is about. For me, yoga is about connecting. When you boil it down, I want you to feel good.

What kind of music will you be playing?

When I’m choosing playlists for my own classes, it’s a blend between your traditional yoga music and electronica. For this one it’s a little bit more upbeat, a little more lyric -based, but it’s still mostly electronic.

We’ll start off low vibes, low to the ground, then we’ll build it and build it. I think there’s a good energy between James Mack and myself, because he gets when I’m going to move into some philosophy, so he’ll turn the music really low, and then when we come into standing postures, he’ll ramp it up. There’s a really good energy in the room. 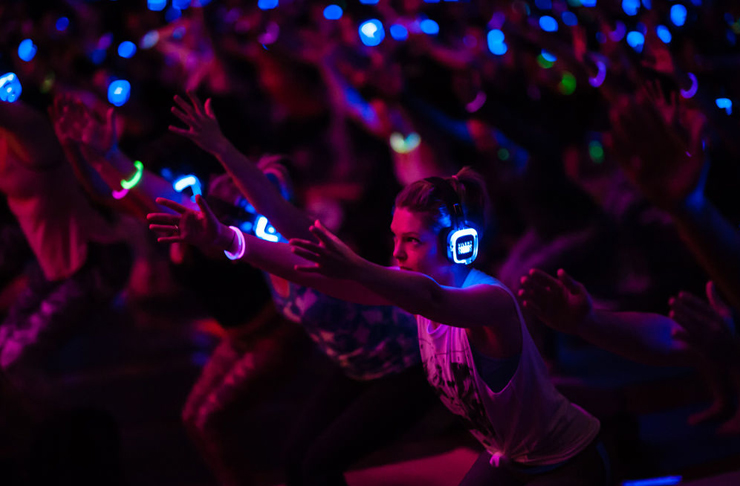 What are you expecting from the Brisbane crowd tomorrow?

I think it’ll be really fun. We’ve been doing these after dark sessions for about three years now: we’ve down Melbourne about five times, Sydney six times, we’ve gone up and down the east coast. There’s no good or bad at yoga. You don’t have to be flexible at all. It’s just about moving your body in a way that feels good. This isn’t yoga for people who are spiritually elite; it’s for anyone who wants to come and feel good and move their body

Need some fresh activewear for your disco yoga session? Check out our winter collection guide.