Where to Find the Best Bar Food in Melbourne

Long gone are the days of the communal mixed nuts. Discerning drinkers want more from their bars than sub-par snacks and, knowing this, the best bars in Melbourne have well and truly delivered. From croquettes to charcuterie boards, fromage to fancy schmancy toasties, here's where you can find some of the best bar food in Melbourne. Pull up a stool and tuck in, Listers!

Le Bon Ton is a slice of New Orleans cool in the heart of Collingwood, boasting an entire room dedicated to oysters (shuck yes!) and a menu boasting American BBQ goodness. After some finger lickin' chicken? Le Bon Ton offers two styles of wings, one pit-smoked over cherry wood, the other Southern-style fried with cracked white pepper gravy. Go both. They offer good sangas too, filled with beef brisket, pulled pork, or fried green tomato for the vegos. With a late night license, Le Bon Ton's kitchen stays open 'til 5am on le weekends, meaning you can drink and dine right 'til brekkie time.

Malvern's Allium Food & Wine is one of Melbourne's best-kept secrets, boasting a killer drinks list (including a 14-strong by the glass vino offering!) and a menu of tasty bar morsels to boot. Go for one of their famed house-smoked duck ham rolls or, for some totally decadent snacking, opt for the seven spice pork crackling. Fromage pique your fancy? (What a question!) Allium features a seriously good cheese menu, with each chunk sourced from the top producers around the world. More cheese? Why, yes please! The friendly folk at Allium host cheese pairing masterclasses on the third Wednesday of every month. This locals wine bar is home to some of the best bar food in Melbourne, hands down.

Melbourne's first specialist Australian spirits bar, Bad Frankie matches local tipples with an Australian-themed, jaffle-dedicated menu. Really. Choices range from the Classic, vintage cheddar and mozzarella on white bread, to the Fat Pie, stuffed with braised beef, a rich gravy and served with tomato chutney. 'Fair dinkum' sums it up pretty accurately. The jaffle action extends to the sweet spectrum, the menu featuring a lamington jaffle, chocolate soaked sponge caked with jam, rolled in coconut and served with cream, and Bad Frankie's take on the Anzac bikkie, brioche toasted with oats and golden syrup. So good but so, so bad. 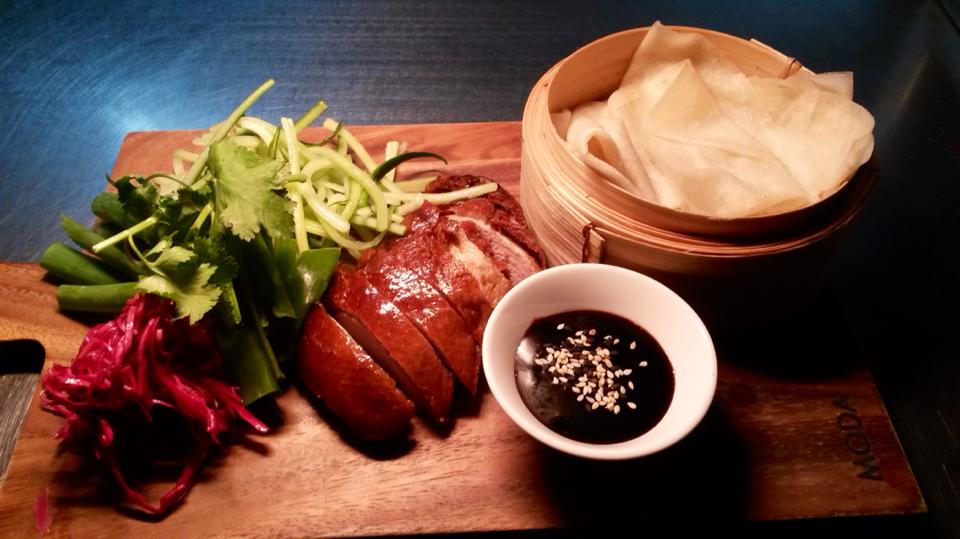 A kitschy favourite of ours, this Fitzroy restaurant features a menu of bar bites fit for a queen, covering everything from baby banh mi to peking duck pancakes, not to mention some of the best darned pork belly in Melbourne (caramelised and served with a green nam jim…yum!). Another stand out, Rice Queen's KFC (Korean Fried Chicken) is coated in a seven spice mix, tossed with spring onions and whole chillies, served with mint sauce. It sure as heck beats the Colonel's. After you've had your feed and fill of cocktails, migrate to the Karaoke room for some out-of-tune good times.

Mexican or Chinese? Por que no los dos? If you suffer from dining indecision, head to Melbourne CBD bar and restaurant, Harley House, for some tasty Mexican-Chinese fusion fare. Think Sichuan chicken wings with arbol chilli, plump little dumplings and steamed buns known as mantous. Our hot tip? Go for the Asado short rib mantou, loaded with chipotle sauce, coriander, cabbage and jalapenos. Pair your mantou with a Tijuana Smash, a tasty mix of Pampero Blanco rum, blood beach, apple and mint. Feelin' lucky? Go for the Happy Ending Roulette (you may or may not regret it).

The Smith is one of our favourite Prahran bars (just a short stumble from TUL HQ!), featuring a menu of deeelicious bar eats, including oysters, soft shell crab tortillas, sticky beef buns...and that's not even the half of it! Whatever you do, don't even get us started on the Kansas style pork ribs…heck, we'll be drooling all over the place!

We all know Johnny Di Francesco can make a pizza, but did you know his bar game is pretty sweet, too? The pizza maestro has just recently opened 400 Gradi Cicchetti, an intimate, Venetian-style bar next door to his famed pizzeria, 400 Gradi in Brunswick East. This sleek new Melbourne bar boasts an extensive range of Italian vinos and traditional snacks, from crispy polenta with mixed caramelised mushroom and gorgonzola, to spaghettini al granchio with lobster bisque. The best part about it all? There's an adjoining door to 400 Gradi, which means Johnny's world famous pizza is also on the menu.

Like a view with your brew? Head right on up to The Lui Bar, Vue de Monde's cocktail lounge on the 55th floor of the Rialto. Known for their inspired alcoholic creations and home to some of the best cocktails in town, Lui's bar menu doesn't disappoint either, offering a sophisticated take on the classic Australian snacks. Ham & cheese toasties? Only with the finest jamon, thanks. Mini burgers? It's all about the David Blackmore Wagyu beef here! Whatever you do, make sure you finish off your night by polishing off the Nutella doughnuts. Sophisticated snackage at its finest.

Housed under the Victorian Park train bridge in Abbotsford, Dr Morse offers abundant bites, bevvies and a great beer garden to boot. Park yourself in the summertime rays and dig into their menu of bite-size delicacies, like crispy pig's ears with wasabi kewpie, fried chicken ribs with ranch sauce, and chips with sriracha mayo. It may not be #cleaneating, but it's just what the doctor ordered.

With a classic cocktail offering and menu of Southern American cuisine, The Collection on Bridge Road serves up some of the best bar food in Melbourne. Having worked at some of the top sipping spots in York and San Francisco, The Collection's owners have brought Cajun flavours down south, crafting a bar menu of jalapeno poppers, popcorn shrimp and particularly tasty French fries, complete with Cajun spices and a pickled okra mayo. Hallelujah, it's good. 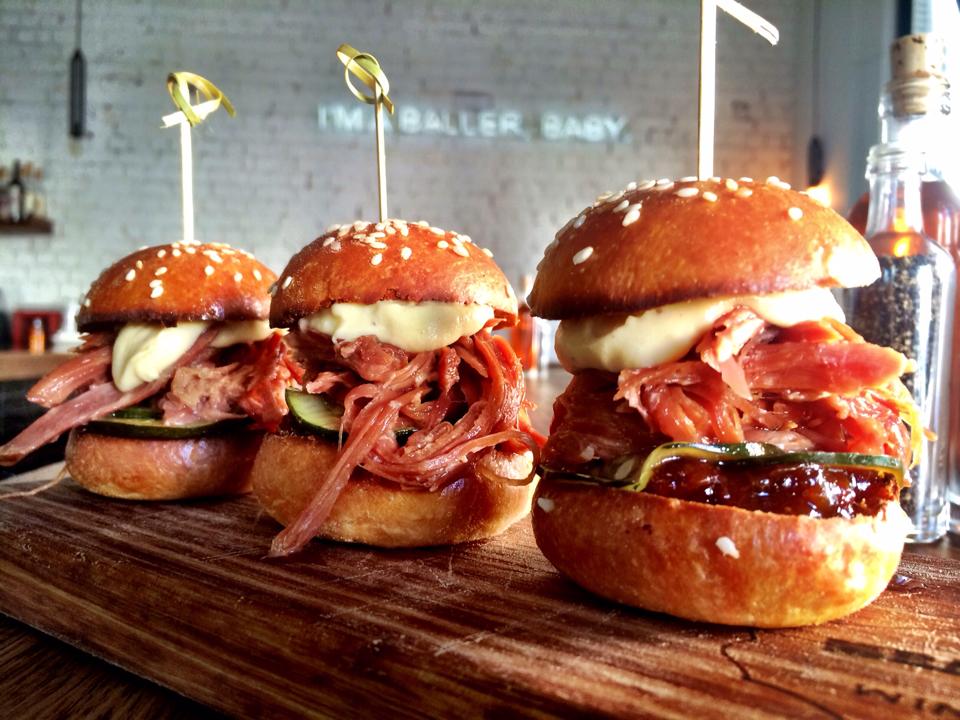 Who loves balls with their brew? We do, we do! With posts in the CBD, Richmond and Collingwood, The Meatball & Wine Bar serves some of the best darn balls in town. Pork, beef, chicken, fish or veg, stuffed into sliders or sitting on mash, these wine bars have something to suit all moods. They've got a solid cured meat and cheese offering, too, available by the bite or board. After something small? Their Wagyu beef jerky makes for a moreish snack. Or, forgo all formalities and go straight for the whoopee mac, a great hunk-a-chunk of ice cream sandwiched between two cookies. Ridiculous.

The Sweetwater Inn brings a little bit of country town charm to South Yarra, featuring a menu of Australian-themed cocktails, brews and bites. Think house made sausage rolls, kangaroo tartar and crispy chicken wings with spicy aioli and a smoked beetroot BBQ sauce. Yum! After a bigger bite? Sweetwater Inn offers chip butties and barbequed meats, alongside their famous i-can't-believe-it's-vegan fare. Struth, we can't wait to get stuck in!

A well-kept suburban secret, Bar None is one of Melbourne's best bars on the eastside (and a regular drinking haunt of the TUL crew). Their drinks list is more 'book' than 'list' – half an inch thick, bound and so sought-after (and regularly stolen) they've started selling them for $15 a pop. They've got a short, sweet bar menu to back it all up, including some of Melbourne's best toasties. Smash a Reuben toastie, stuffed with pastrami, mustard, Swiss cheese and pickles, and thank us later.

Housed in a heritage-listed Masonic hall, Brunswick Mess Hall sure is one cool cocktail bar (or shall we say barn?). The Lucky Panda Kitchen serves up spicy Asian bites, including edamame with wasabi salt, char siu pork skewers and beef bun bao. Match it with a punch bowl, potent concoctions serving 4 to 6, and prepare for one messy good time.

Check out more of Melbourne's best bars and pubs.