Once a big-time chef, Paul West became the poster boy for a new wave of sustainable living and eating when he became the face of River Cottage Australia in 2013.

Paul spent the last 3 years living on a 10-hectare farm near the pretty town of Tilba on the NSW South Coast and in that time he's become fully involved in the country life; when he's not cooking sweet treats for the local ladies, he's swimming with local lads or organising the annual "social" cricket comp.

But lucky for us he's swapped the paddock for a plane and has landed in Brisbane for the Good Food & Wine Show along with some other fabulous foodies including George Calmobaris, Adam Liaw and Sarah Wilson.

We caught up with Paul to chat about farm life, the upcoming series of River Cottage Australia and what he'll be getting up to in Brisbane.

You're in Brissie this weekend as part of the Good Food & Wine Show? What can we expect from you? And where will you be eating when you're here?!

You can expect bad jokes told in good taste, and plates full of easy to cook, delicious food. I haven't done my research about where to eat, so I'm looking for suggestions!

Living on a farm sounds magical, but I'm guessing it's a lot harder than it seems. What have you learned since starting work on your farm?

I've learned that it's easier to work with nature rather than against it. I'm still learning, but I'm lucky that the garden is a great teacher. 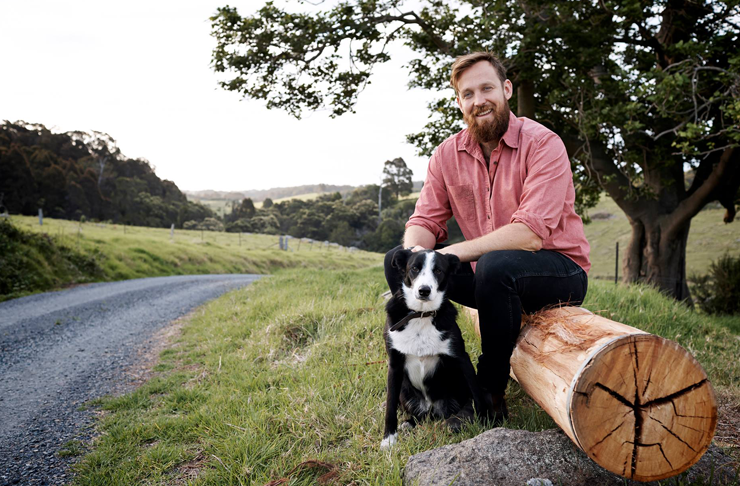 How is filming for Season 4 of The River Cottage going? I hear we find out you don't actually just live in a bachelor pad with Digger?!

Season 4 is going great! We're half way through and it feels like only yesterday that I was seeing the farm for the first time and meeting Hugh Fearnley-Whittingstall (from the original River Cottage series). And yes, for the very first time there may be a BRIEF cameo from my family!

You cook lots of epic creations (mmm, that lemon tart and that roasted pig on a spit), but tell us what happens to all of your leftovers? Do you have a designated leftovers team?

They get eaten! If not by me then by one of the many leftover loving animals around the farm. Between Digger, the pigs, the chooks and the earthworms in the compost heap, not a scrap goes in the bin.

What's the most delicious thing you've ever made or grown on your farm?

It's hard to put a finger on, but I'd have to say that the first time that I spit roasted one of my own pigs for 6 hours is floating around very close to the top.