When news of a new restaurant hitting Brisbane comes our way, there’s always a few indicators that it’s one we should be ready to book a table at as soon as the doors swing open. And Naga, the Thai party palace that just opened in the city's Eagle Street Pier, is one that ticks every single one of the boxes—so you should already be checking your calendar.

Firstly, Naga Thai is the brainchild of Andrew Baturo and partner Jaimee Baturo, who you might recognise from one of their other legendary Brisbane venues, Libertine (pictured above). Baturo is also a co-founder of The Gresham, Walter’s Steakhouse and Popolo, just three of our absolute favourite venues in Brisbane, so to say we’re keen for his latest venture, Naga, is an understatement. 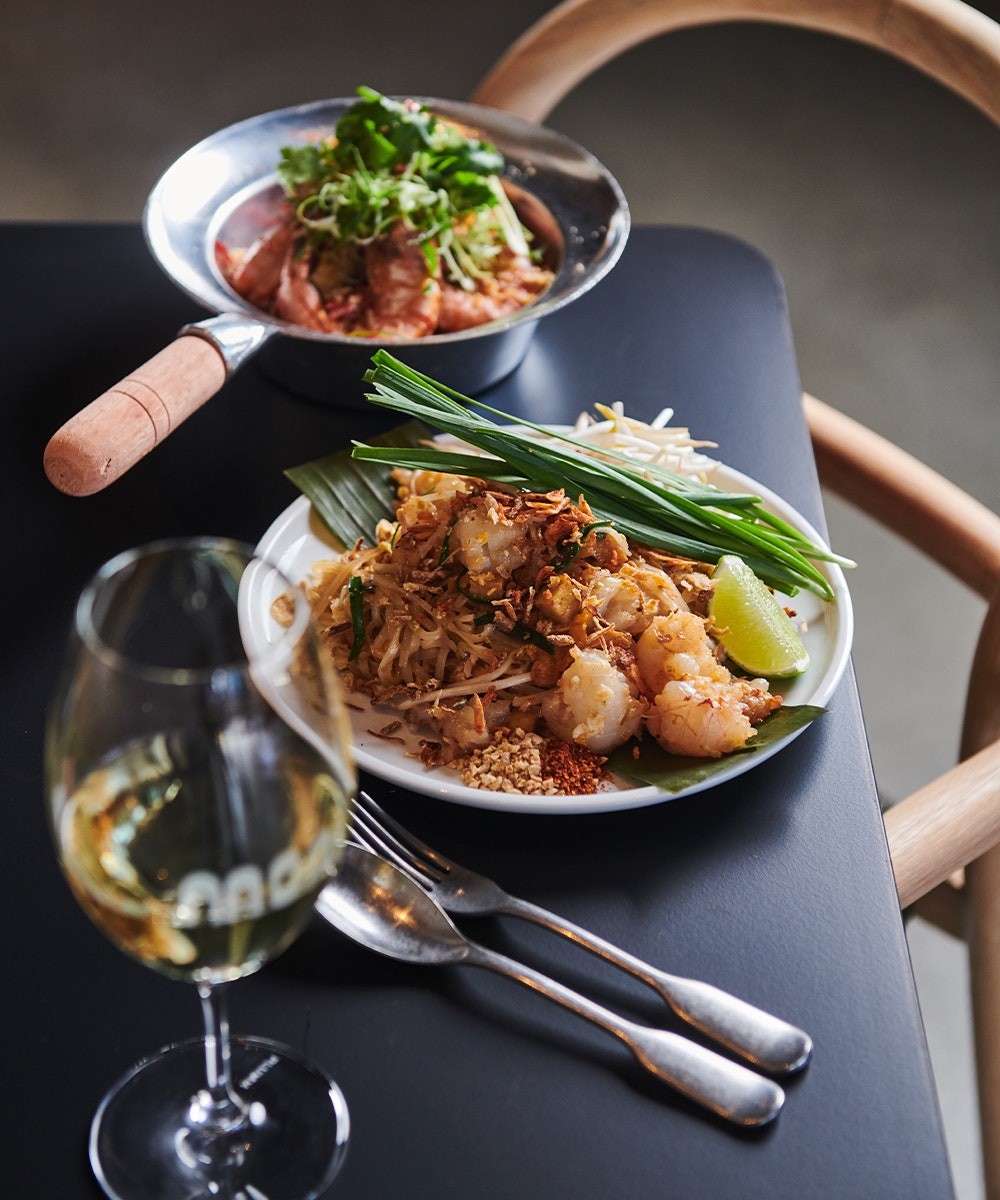 Second, the new restaurant’s design has been crafted by none other than iconic Brisbane designer Anna Spiro, who has created a 60s and 70s inspired interior full of bold colours, retro objects and voluminous lamps. The new venue has taken over the space that was once home to Pony Dining, with floor to ceiling windows looking out to the Story Bridge—another tick for the list. Engulfing the ceiling are dozens of round paper lanterns, while one entire wall has been taken over by colourful bookshelves. The whole space smacks of fun and frivolity—it's the kind of spot you want to hang out in with your crew all night long.

Finally, heading up the kitchen is Head Chef Suwisa Phoonsang, ex-Libertine, who's paying homage to Bangkok and the northern village of her upbringing in Thailand with a seafood-heavy menu that's far more playful than your standard Thai menu. Here you can start with the likes of massaman beef milk buns, flower dim sims and spicy pork and jasmine rice balls, then move on to hearty mains like fish dumpling green curry, chilli pork belly stir fry, marinated pork loin drunken noodles with a dash of Thai whiskey and blue swimmer crab fried rice. It's a menu you'll struggle to choose just a few dishes from—so you'll have to come back again and again. 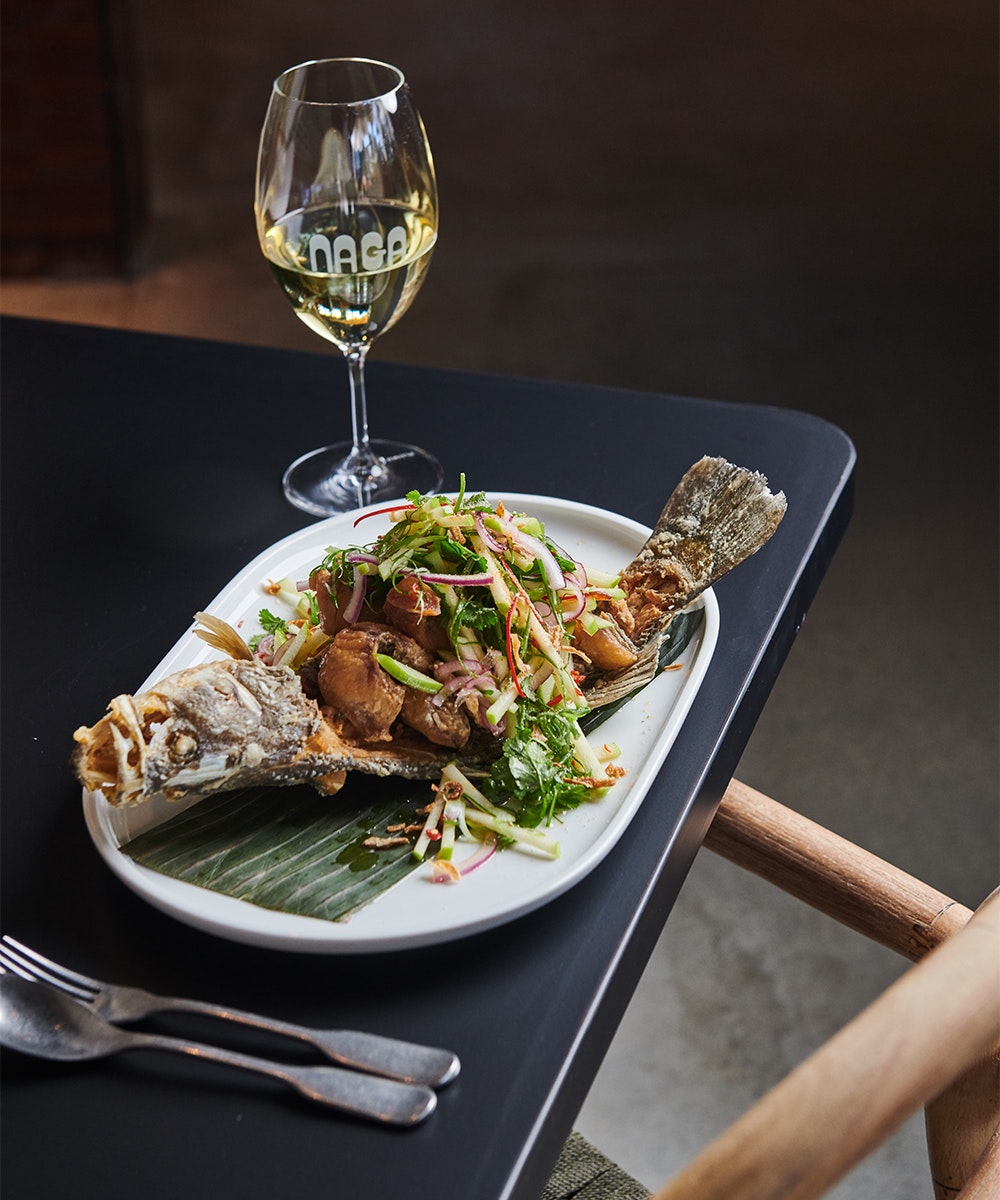 Do we even need to mention that there's also a smashable list of cocktails, like the #dontbekoi, a blend of strawberries and cream tea-infused gin,Crème de Fraise Des Bois, lemon, rhubarb bitters and strawberry coconut mousse, as well as boozy iced teas, wines, beers, seltzers and anything else you could possible want to drink? We thought not—but it is an added bonus.

Naga opens today, Wednesday 30 September, and is set to stick around as a ‘long-term pop-up,’ with Eagle Street Pier’s upcoming redevelopment (don’t worry, it’s two or three years off yet) meaning the venue won’t be permanent—at least not yet. You can check out the full menu and book a table here.

If you're looking for more dinner ideas, check out the side of bacon you can order at Walter's Steakhouse.