This Guy Drank A New Beer Every Day For A Year

This isn’t a tale of binge drinking. We’re not down with that. This is a tale of a guy who decided to try a different and interesting beer everyday for a year.

Full disclosure: this guy, a Mr Phil Swan, also happens to be The Urban List’s burger loving Marketing Manager and the voice behind The Urban List Brisbane’s Facebook page.

Phil’s quest saw him sip, swill and smell a diverse array of craft beers, 365, to be exact, most of which we’ve never heard of and will probably never get around to trying ourselves—from brews with the flavour profile of lamingtons to corked beers to obscure beers on holiday in Greece, France and Dubai—he’s tried it all.

We followed Phil’s booze odyssey closely throughout the year (the daily Insta account he kept over the year chronicled his many, many beer choices) and caught up with him post-beer year to get the goss on the best craft beers on the market—and how all those frothies affected his waist line—from the man who has developed quite the palate for the good stuff. Thanks Phil!

What made you want to take on this beer odyssey?

I’m not actually a beer geek; I just wanted to try out something different and came up with this idea of a beer challenge for 365 days. I also wanted the bragging rights of knowing which beers are cool so all my mates could ask me for tips.

After trying 365 different beers, can you even remember them all?

Surprisingly I’ve been good at remembering which beers I’ve had! #photographicmemory. Though, when I got to around 280 beers I started having trouble remembering which I’d tried and which I hadn’t at the bottle shop because many of the labels look similar. I created an Instagram page to keep track of each beer, which, I’ll admit, made it a whole lot easier.

What did you learn over the year?

I learned to really taste beer, as opposed to just drinking it. Having one new beer a day made me pay attention and appreciate each unique brew. It was interesting—I ‘grew’ into many beers I didn’t think I’d like initially. I started off liking pale ales and lagers and then, as I moved onto new varieties, I got a taste for ‘hoppier’ beers like IPAs and Double IPAs. Unfortunately I never grew to like rich stouts and porters, probably because I don’t like coffee.

Another fun element was that I also got pulled into Brisbane’s craft beer community through my Instagram—it was cool to learn more from these guys and have regular interaction, sharing new finds on the Brisbane beer scene and beyond.

I was overseas for four weeks of the challenge, which was cool because I got to taste some French, English and Greek beers. Finding beers in Dubai was difficult! 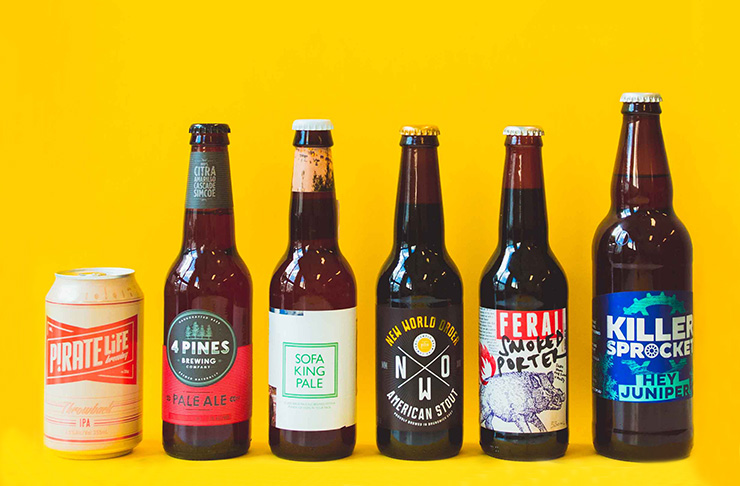 What are some of the most interesting brews you tried out over the year?

A few of my favourites were the Kooinda Milk Porter—I don’t like rich Porter’s but the milk in this one cut the bitterness and made it quite malty, with an almost almond vanilla flavour; the Mornington Peninsula Brewery worked with a coffee roaster and made a great beer that came in a little can; Quiet Deeds have a beer with the flavour profile of lamingtons, which was epic; La Sirene Praline, which I had on my birthday, had a praline toffee caramel taste; The Holgate Brewery’s Hop Tart was a sour beer that tasted like Warheads! The last beer I tried was the LTM Doppelbock Grand Cuvee—it’s a corked beer and bubbly. It’s also around $28 a bottle, so not for everyday drinking!

Did you ever get sick of beer? Are you over it now?

No, not at all. I hope that never happens—ever!

What are your go-to places for beers in Brisbane?

I head to Archive, Bloodhound Bar, Newstead Brewing Co., Green Beacon Brewery and Tippler’s Tap. They often have tap takeovers with a range of new experimental brews. I also check out Malt Traders and the The Wine Emporium when buying beers for home.

Unexpectedly I found that sourcing 365 different beers wasn’t that hard; local breweries are making new and interesting one keg releases all the time so there is a lot of choice.

Really important question: did you get a beer belly?

Hahaha. No. That was a concern, but I hit the gym pretty regularly.

I’m considering doing a new challenge that isn’t so expensive! I’m thinking I’ll watch the Top 100 movies of all time and review them. Classics like The Godfather, Aladdin and Gone With The Wind could be great?

To learn more about Phil’s Beertathlon, check out his Instagram and his famous Guide To West End Bars!