Two Minutes with Alice in Frames

There are 'foodies' and then there are true foodies, those that live and breathe food and dream in flavours. The newly anointed face of Prahran Market, Alice Zaslavsky (aka Alice in Frames), falls into the second category. Not familiar with the name? You'd definitely recognise the face – Alice is she of the zany red mega specs and uber bubbly personality from Season Four of MasterChef Australia.

We recently tried to have a two-minute chat with Alice in Frames about life post-MC, but her enthusiasm for food and life in general was so contagious that we found ourselves missing our tram and settling in for a cuppa.

TUL: Let's start with the obvious – MasterChef! What was that experience like? Any dirt on Gary, George or Matt you can share?

Haha! You guys! That's what confidentiality contracts are for. I guess I could tell you that they're much nicer to us off-camera than on. They've been really supportive following the show as well – I'll get the occasional message from Gaz checking in, or a phone-call from George to rattle off a million things I could be doing to make progress on my "Food Dream", or a catch up brunch from Matt where we end up talking more about Game of Thrones and newest restaurants opening than anything useful.

TUL: Life after the MasterChef whirlwind…as crazy as filming or even crazier? Did you have any downtime after you finished filming?

You have no idea! Filming of the season wrapped in July, then we had a month before coming back for the finale, so there was hardly any downtime. I spent most of it trying to decompress – I slept A LOT. Ellie from Season Three told me that it takes like a year to get over the shell-shock of the experience and she's so right – you get used to people telling you what to do and where to go, so you have to relearn everything – even simple things like looking both ways when you cross the street.

TUL: 2013 was another big year for you…a wedding (yes, we stalked the #ferment2be hashtag – too cute!), the arrival of Leopold Tolstoy (Melbourne's most suave pup), and appearances galore! Can you tell us what you're currently working on?

2013 was definitely a big one – especially at the pointy end, where in the space of like four weeks, I shot season six of Kitchen Whiz (which is on the air every morning at 7:30 on Channel Go!), flew back home to host the Taste Kitchen at Taste of Melbourne, then to Margaret River to MC chefs like Rick Stein and Sat Bains, then back to Melbourne again to get married five days later. Nuts!

Somehow, this year's already shaping up to rival the last few.

I've just signed on as the face of Prahran Market or "Adventurer-in-Residence", as we like to call it. There are some amazing events planned for bringing even more vibe to the market. I'm hosting monthly chef-challenges, where some of Melbourne's top chefs are given half an hour to collect ingredients, then 45 minutes to cook a mid-week meal while I fire off questions (just quietly, I think this is my way of getting my own back after all those crazy challenges these same chefs set us on MasterChef).

I'll be resuming my post as curator of the Kids Food Fun sessions at the Royal Melbourne Show as well, which was such a great experience last year.

I'm also doing a fair bit of travel this year. Heading off to Europe for a belated honeymoon and some recon for my next TV project, then again in September as host of a tour of the UK with MasterChef Travel. Most likely, I'll be back in Margaret River in November, then New Zealand in December, at which point, I'll probably collapse in a heap.

On top of everything else, I've been chipping away at the epic love story that is Alice's A-Z of Food, which is tipped for a 2015 release. It's essentially a little food encyclopedia for kids, complete with handy hints, fun facts and all of the puns.

Oh, and I've been spending a lot of my downtime with my fur-baby, Leopold Tolstoy – he's a six-month-old Rhodesian Ridgeback who makes my heart burst with pride. He sends his regards by the way, and thank you for your inclusion of him in your Top Ten Dogs to Follow on Instagram list!

TUL: We love that you call yourself a Life Teacher…what do you aim to teach people through your work and appearances?

I love that you love that! I don't think I could ever stop referring to myself as a teacher – after all, how else could I justify my HECS debt? (guffaws) But seriously, I grew up in a home where education and knowledge was the most valued asset. When we moved from Georgia, we left practically everything behind except for the books. Our first big-ticket item purchase was the Encyclopedia Britannica. I think that's always stayed with me – the thirst for learning and experiencing new things. And that's really what I'd like to instill in others, especially kids – that it's cool to get excited about life (also, books). And I think food is a really great medium, because the reward is so instant. You learn how to make something, you make it, you eat it. That's what I call winning at life.

TUL: What's the best part of your job?

I was the kind of kid that organised performances in the living room with my cousins and made their whole family sit through renditions of Spice Up Your Life. So I suppose that my favourite part is still being able to pull a crowd to a stage and make them laugh (because, let's face it, that's what my family were doing).

TUL: And the part that everyone thinks is oh-so-grand but ain't-so-great?

I know a lot of people struggle with the recognition-factor post-MC. It's kind of weird to be walking through a crowd and have people staring at you, especially since paranoia usually kicks in and you just assume there's something lewd on your forehead. Having said that, I'm pretty lucky because my most recognisable feature (my granny specs) are also removable. If I don't want to be recognised, I just wear smaller glasses or contact lenses – like Clark Kent and Superman.

TUL: What do you love so much about living in Melbourne?

I love Melbourne's awesome cafe culture. We have the best cafes going round – there are just so many great ones to choose from, so I let Leopold Tolstoy pick, based on which outdoor tables he most prefers to nap under.

TUL: Why do you think Australians, in particular Melburnians, have such a passion for food and dining out?

I suppose it's because we're relative newbies to the food scene. We don't have an established food tradition like the Italians or French. Instead, we're quick to embrace new trends, willing to try new things and take food risks. Especially in Melbourne – if you've never tried a chili hotpot at Dainty Sichuan (it'll melt your mouth off) or a crazy layered dessert from Burch & Purchese, or gorged on fish tacos at Fonda, or waited in line for three hours at Chin Chin, you're probably from out of town.

Ahhh! This one is hard, because I have so many favourites, and way too many friends opening awesome cafes of their own. Hi friends! I'm going to say that any place with a dedicated and passionate chef, who's always updating their specials and offering new and exciting beds upon which to rest their ubiquitous poached eggs.

TUL: Favourite place for a long (and potentially boozy) lunch?

If we're keeping it local, I like Uncle in Balaclava or Hawk & Hunter in Ripponlea, because they have fun food and excellent waiters who love a chat. If we're moving towards the city, Hare & Grace or Union Dining, for very similar reasons, actually.

TUL: Favourite spot for dinner or a night out with friends?

Can I say my place? (laughs) Nick and I love entertaining. It's actually why I enrolled in cooking classes in the first place – because I wanted more mad skillz to pull out at dinner parties.

TUL: Best place to work out (to compensate for all the tasting in the kitchen)?

Crossfit St Kilda. I've been training there with my coach Jules for like the last four years. He knows when to push me and when to let me sprawl across the foam-roller like a disappointed baby seal. I like to think I'm on the Road to Regionals – it's just a really long and winding road.

I'm not going to show my full hand just yet, but suffice to say, a lot of travel, watching of Game of Thrones and Mad Men (also, cat videos), pumping of iron, weekend dog shows with Leopold Tolstoy, reading of books. Oh, and eating. So much eating.

It's still very early days, but someone who's definitely stood out already is Laura. She's 18 and killing it. This season has some seriously good cooks, though – they've definitely hooked me more than I expected. I'm really looking forward to meeting them and welcoming them to the MC family when it's all over! 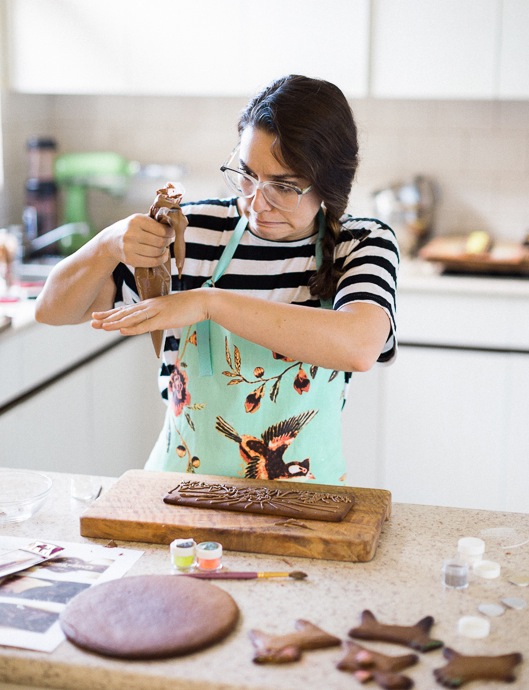