International Bacon Day is a thing. And it's happening today. When this news was dropped on me earlier this week I actually went temporarily numb with excitement. To celebrate we are rounding up the best bacon breakfasts in Brisbane, Brisbane's best bacon butchers, and the best bacon sandwiches in town.

Before I dive into Brisbane's best bacon dishes and where to buy your own, let's brush up with a brief history of our favourite breakfast meat. Bacon has been a mainstay of the kitchen table ever since we discovered that by curing and smoking the side of pork, the meat would remain edible for much longer without refrigeration. For this reason, and that the cut was so affordable, bacon was considered the poor man's meat. Who's laughing now, gentry!

Fun fact: bacon eaters have more successful marriages…this claim might be a little out of date as it harks to a 12th century tradition of the English town of Dunmow. After exactly 366 days of marriage, any man who could swear before the congregation that he had not yet quarrelled with his wife would be awarded a side of bacon by the township. Beat that, Bachelor.

Prior to the 1770s, everyone had their own method of smoking and curing pork meat, but it wasn't until the industrial revolution that a bacon processing plant was established. And who do we have to thank? A man named John Harris, who through some stroke of genius began distributing bacon across the country and began a revolution to provide bacon all year round, not just during winter. We owe him so much…

Fancy yourself a kitchen wiz? We've found a few tips to help you cook the perfect bacon every time. The first step is sourcing beautifully fresh, quality meat. The lucky folk of New Farm have Rayner's Meats (882 Brunswick Street) to supply them with the quality cuts, but for the rest of us Brisbaners, there's the Bangalow pork stockist list; Cabassi and Co Artisan Butchers; Gordon and Luxton Gourmet Butchers; Kobe's Gourmet Butchery; and Village Meats Rosalie.

The next step in making your own deliciously crispy bacon is the cooking method. Among the bacon connoisseurs, there are two chief modes: frying or baking. You can fiddle around with your pots and pans and you might create something edible, or peruse these methods and get cracking bacon every time.

Arrange your bacon slices in your pan, then add just enough water to cover the pan; the water renders the fat so that once the water has boiled away and the bacon begins crisping up, searing fat won't splatter everywhere, resulting in a crisp, chewy texture.

Line a baking pan with bacon. Place it in a cold oven and set the temperature at 204°C. Return in 20 minutes to find the most gloriously crisp bacon you will ever make. Need more information? These guys know what they're on about: http://baconmethod.com/.

Ever versatile, bacon encompasses the essence of breakfast. It can be served sweet with pancakes or savoury with eggs, and perfectly complements everything from starch and vegetables to sauces, syrups, and even other proteins. If you're ever at a loose end trying to find new and creative ways to incorporate bacon into your diet, try a sprinkling of bacon salt on your next omelette or bowl of popcorn for that extra bit of protein you didn't need.

Here are some of our very favourite bacon dishes up around Brisbane: 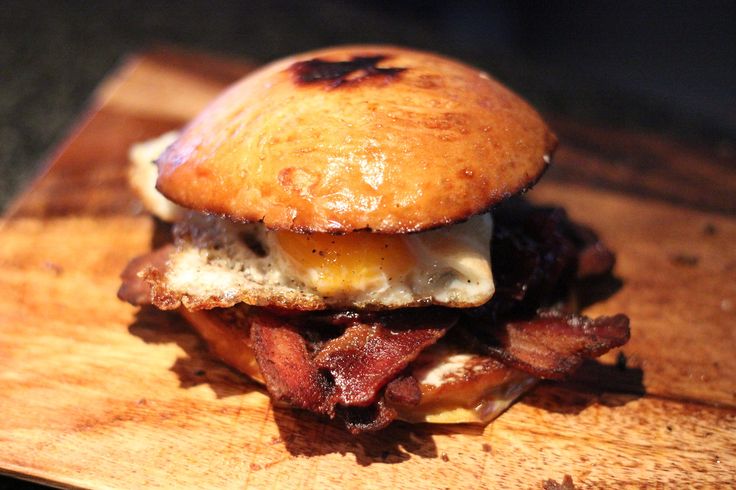 And, of course, bacon sarnies: