If there was ever a phrase that makes us do a little dance in our seats, it’s “long lunch”. Those two little words are packed with meaning: you just know whatever happens, there’s going to be epic food, great company, a lingering, relaxed vibe, and (obvs) plenty of delicious summer drinks. What’s not to love?!

‘Tis the season for socialising, and how better to catch up with all your fave peeps than over a long, sunshiny session, so we’ve teamed up with Hoegaarden to help us round up a lip-smacking list of where to hit up for an epic long lunch this summer.

The Gaarden, The Island Hotel Deck

As if boutique hotel The Island wasn’t awesome enough, Hoegaarden has gone and made it even better by transforming it for the summer into lush, outdoorsy pop-up beer oasis The Gaarden. This leafy deck is the perfect backdrop for a delicious shared lunch paired with a frothy Hoegaarden while you soak up tropical, summery vibes with your mates. Does it get any better?! Check it out from December 22 onwards. 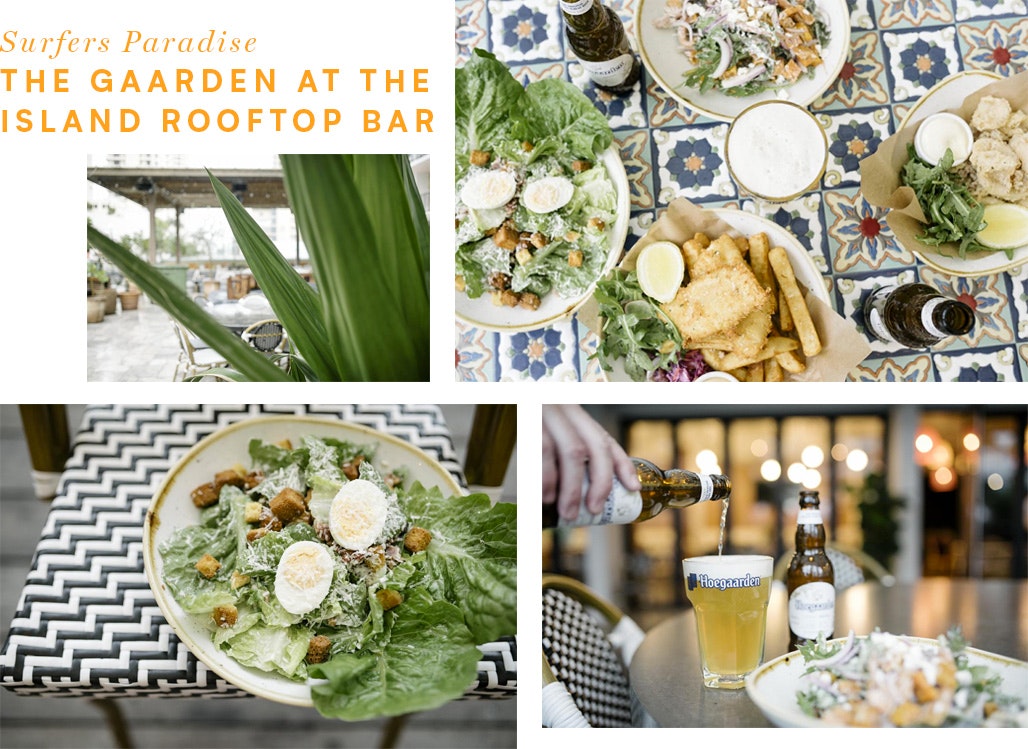 Those legends at Hoegaarden are at it again: one of the most picturesque settings in Brisbane has just got even better. As well as The Island, Brisbane also gets its own version of pop-up beer heaven The Gaarden—this time at South Bank Beer Garden! An outlook of bright blue water, pink bouganvillea, majestic palms and the city skyline is made even more lush with shady umbrellas, extra greenery and topical vibes. Just add great eats, all your mates and plenty of well-earned, refreshing bevvies while you make the most of a Brisbane summer.

This tucked away, 120-seat bar and bistro in the middle of the city is a relaxed and spacious spot with a clean, modern architect-designed interior that’s all timber, greenery and splashes of black furniture. Enjoy their simple but effective modern Australian menu with a little bit of Mediterranean flair from high tables along an open window or a palm-fringed main dining area (don’t miss the Angus beef cheek rendang paired with an icy-cold Hoegaarden). Plus, you’re in the city so the kick-on options afterwards are endless!

If there’s ever a venue that's iconic, it’s The Avenue, a total GC institution in the heart of Surfers. From its origins in the 70s as one of Australia’s first nightclubs, it’s benefitted from a recent multi-million dollar refurb to bring it back to the right side of modern (while all the good vibes remain). Its buzzing atmosphere guarantees you and the crew will have a killer of an afternoon, but not at the expense of genuinely great food: think an Italian-influenced, New York-style menu of oysters, entrees, gourmet burgers, charcuterie platters, pasta, steaks and salad, all washed down with plenty of drinks. Quintessential beachy Gold Coast feels! 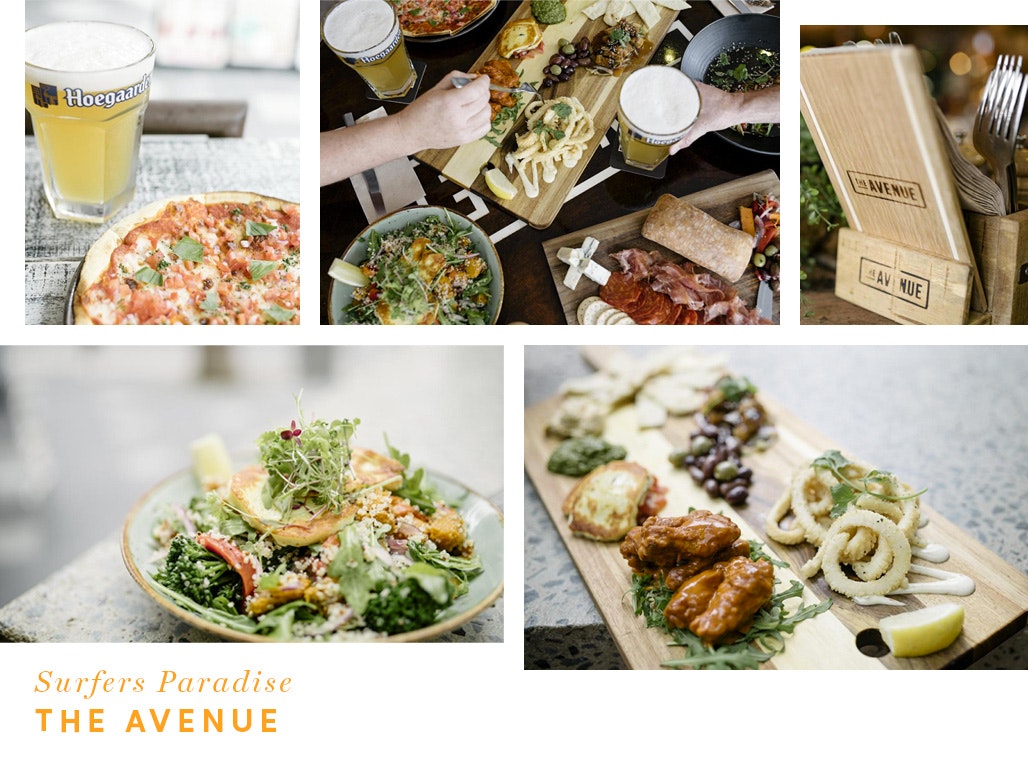 With its dreamy oceanic styling full of blonde wood, bright light and and natural textures like driftwood and rattan (not to mention a killer drinks list), this place is the absolute epitome of magical summer hangs. Right on the oceanfront, Baskk’s menu is truly Insta-worthy, from colourful raw dishes, to oysters, stylish entrees and mouth-watering mains, plus an extensive selection of bar snacks and pizza. With the majority of dishes designed for sharing, this is one summer destination you and the squad need to get to, stat!

Short of catching up with the crew in southern Europe, this southside gem is pretty much the next best thing. With its wide open, resort-style outlook over a glittering turquoise pool and tropical gardens and colourful, bright and summery vibe, you’re already halfway there. Then they’ll transport you (well, your tastebuds anyway) to the Mediterranean, with delicious grazing plates like baby squid, fried polenta, and arancini, plus authentic, melt-in-your-mouth meat dishes from their special Josper oven imported from Spain. A relaxed, delicious European-style lunch lounging poolside? Count us in! 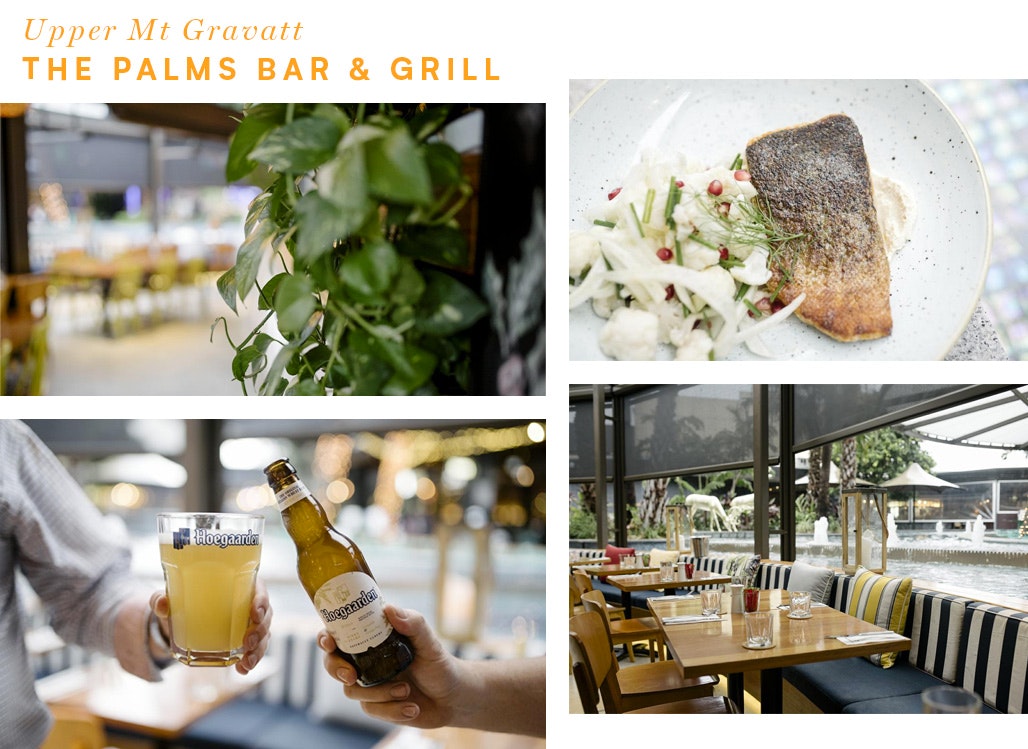 New Farm watering hole The Queens Arm Hotel (AKA The QA) sits smack bang in the middle of James St—the perfect central spot to rally the squad. This total classic of a pub’s recent $130 million (yep, $130 million) refurb means you’re in for a next-level pub feed from their state-of-the-art new kitchen: think Moreton Bay bug buns, five types of pizza, charred corn with chipotle butter, and an epic selection of steaks. Fear not, it’s still your unpretentious, heritage atmosphere; just snazzed up with modern touches including a 40 square metre green wall so you can enjoy summery, outdoor feels even when a Queensland thunderstorm hits.

When somewhere’s been open since 1874, it’s no wonder they’ve got it right. If you haven’t brought the gang to this gorgeous Victorian riverside hotel, put it at the top of the list. Whether it’s a private dining room affair or a casual get-together, this beautiful historic venue’s got you. If you’re up for something refined, The Boatshed restaurant is your go-to: excellent drinks, and a refined menu with incredible seafood options like squid parpadelle, Hiramasa kingfish and melt-in-your-mouth crab cakes; plus what’s got to be one of Brisbane’s most impressive steak menus including a mouth-watering selection of dry and wet aged steaks. Otherwise, hit up the courtyard for unreal pizzas, bar snacks, and plenty of cold drinks—there’s even a hidden speakeasy bar in the basement!