I Lived On Soylent, AKA Nutrient Dust, For A Week

I’m all about new concepts, especially when it comes to things that feel like they’ve jumped straight out of Back To The Future. Self-tying sneakers? Hoverboards? Space food? Sign me up, Doc! This largely explains why I was so darned excited to spend a week living off Aussielent, an Australian nutrient mix that’s designed to ENTIRELY REPLACE REAL FOOD. Yep, instead of tucking into actual bites of solid food, I’d be sipping on nutrient shakes for a whole seven days.

Firstly, Aussielent is totally different from your average food replacement because it contains the perfect balance of protein, carbs, good fats, vitamins and minerals that any adult should be getting from their regular diet. This means it’s got nothing to do with dieting, bulking, purging, blah blah blah. It’s basically all of the essentials for people who are mind-blowingly lazy… Or mind-blowingly busy. And anyone who knows me, knows I’m the second.

So, what the hell is it? Aussielent comes in a pre-mixed liquid and unmixed powder form (all you do is add water, natch). It’s made from oats, whey, tapioca, synthesised vitamins and minerals, and if you go for a flavoured version, either chocolate or vanilla flavouring. Its slogan is ‘food reimagined’, and that it certainly is. Food reimagined. As dust. 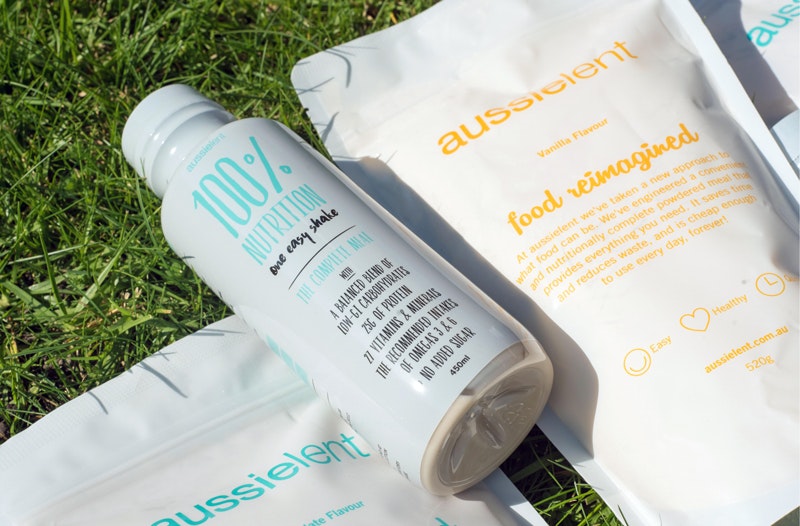 In terms of dizzy spells, vomiting, pining after a bacon sandwich etc, I didn’t suffer one little bit. What I did notice was a lack of sugar-influenced highs and lows—no 3pm slump after a carb-heavy lunch, or late night buzz after eating half a dozen spoonfuls of Nutella, straight from the jar. Was I hungry? Not really. Was I productive? Well, I didn’t spend any time dashing out to grab lunch or cooking dinner, so I did have more time on my hands to get shit done slash Snapchat random things on the internet from the comfort of my desk.

The chocolate and pre-mixed ‘neutral’ flavours tasted good—malty, inoffensive—while the vanilla flavour was a little sweet for my liking. Although I was meant to have all 4 portions in a day, 3.5 was enough.

The worst bit about my Aussielent onboarding experience was how everyone else around me acted. My brother advised me that it might not be such a great idea to shock my body into a liquid-only diet, rather than easing into it. My partner wondered what we were gonna do to facilitate us hanging out, given that dinner was off the cards. My colleagues said things like, ‘OMG you’re taking away one of the only pleasures left in life,’ and, ‘I get that it exists, but I just don’t see why anyone would actually want to try that stuff.’ Haters gonna hate *and* waste precious time and energy having a drama about who stole their avocado from the office fridge…

Pretty healthy and energetic, as well as pretty pleased about the fact that I hadn’t succumbed to the wiley temptations of solids yet. Most importantly, I didn’t feel drunk after one glass of wine, which was a big worry when walking to the pub, and I didn’t feel like I was going to die at any point while walking home. So far, so good.

TOTALLY INVINCIBLE. I slammed through all of my day’s tasks, totally uninterrupted by hunger pangs or cravings for Butterbings, and cruised on out of the office at 5.30pm to go the latest NASA film, A Beautiful Planet IMAX.

I felt 100% smugness while sipping on a nutrient shake, watching astronauts drink their espresso mix from vacuum pouches, knowing I was preparing myself for the imminent demise of the Earth and my new life on Mars. One small step for a mediocre food writer with a penchant for scotch and daytime fantasies, one giant step for humankind.

By day four, I’ll admit that I was beginning to feel a little bored of Aussielent 24/7, but my boredom felt like a small price to pay for all the brain space that I’d managed to free up from not having to think about meals.

This was something that also seemed to polarise people—my boyfriend was bemused, but his housemate immediately wanted all the deets. We had a long and heated discussion about decision fatigue, free will, mental capacity, and becoming super-humans fed by tubes of nutrient solutions fed directly into our stomachs. I WAS BECOMING THE FUTURE.

Okay, so by this stage the rules of the game went completely out the window. Hellooooo weekend! I stuck to my Aussielent diet until around 8pm, when a friend and I caught up for dinner (hers) and drinks (mine). Going straight back to solids by consuming an oyster didn’t strike me as a good idea, but having survived so far, I thought, ‘Why the hell not?’

I didn’t vom (hurrah!) so continued with a single mussel, some cocktails, and a glass of my favourite beer. This led to some questionable decisions involving Uber rides, Jamaican beer, Chinatown laneways, a LOT of sweaty dancehall moves, and a CBD bar that serves lobster mac’n’cheese bombs until 1am. Vague memories of thrusting a bottle of Aussielent that I had in my handbag towards my friends, telling them that it had changed my life, swam around in my head as I tried to remember the lyrics to Fleetwood Mac’s ‘Dreams’ on the cab-ride home.

Very full and very drunk. Neither of these feelings were the doings of my Aussielent challenge.

Bloated after that goddamn sandwich, and ashamed that I had failed myself.

Having ‘maximised’ my weekend by spending it a) mostly drunk, and b) avoiding adult life, I got to Monday morning having not done any grocery shopping, but having a suspicious surplus of Aussielent in my desk drawer. Breakfast and lunch = Sorted.

Aussielent is an awesome product if you’re a busy person who frequently forgets to eat lunch, or can’t stomach solid foods in the morning but needs some energy to kickstart your day. It’s also pretty darn tasty compared to other weird nutrient products I’ve tried, and it’s made in Melbourne, so at least you’re supporting local even if it’s not through buying meat and veggies.

Should you live on it? Probably not—I mean, it’d be pretty boring to live on anything 24/7—but it’s definitely handier and healthier than a heap of other things that I’ve substituted for lunch in my lifetime. And besides, when NASA comes looking for that food blogger to critique their latest line of liquid lunches, they’ll know just who to call.

Want to give up food forever? Order yourself some Aussielent here.