“You have no idea how hard it is to build a giant mushroom,” says Storyville co-owner Steve Thomas.

“We had builders in here scratching their heads. It’s never been done before. In the end we had to cut it up into nine pieces and assemble it over the bar, piece by piece.

These are the problems that crop up when you open a two-storey fairy tale cocktail bar in the CBD, complete with luminous toadstools sprouting from the walls.

Storyville is the latest venture from husband and wife team Steve Thomas and Keti Kezunovic (29th Apartment, Pawn & Co). Conceptually ambitious, aesthetically ridiculous. It’s a bit like those places that do fairy birthday parties...if those parties served tequila and had a 5am liquor licence. You half expect to see Shrek up at the bar, sipping a martini (two eyeballs).

The challenge with Storyville was to evoke childhood fairy tales, without becoming a kitsch parody. To accomplish that, Steve and Keti enlisted the help of designer Josh Lefers (Pawn & Co, East 9th Brewing). Lefers took the bones of the old Wah Wah Lounge, and stripped them right back. Exposed brick, peeling paintwork, high ceilings and moody lighting makes the space feel more Manhattan than Melbourne.

Then, of course, you’ve got the mushrooms...

Upstairs there’s a Narnia library, complete with roaring fires and novelty books on the wall. They’re not all kids’ classic either. You can spot Fear And Loathing, War And Peace, On The Road and the 70s classic Journey To Ixtlan, all picked out in life-like detail. After a few cocktails, the whole thing feels like a Hunter S Thompson acid trip (which probably explains the doctor’s quote on the wall out front: “Buy the ticket. Take the ride.”) 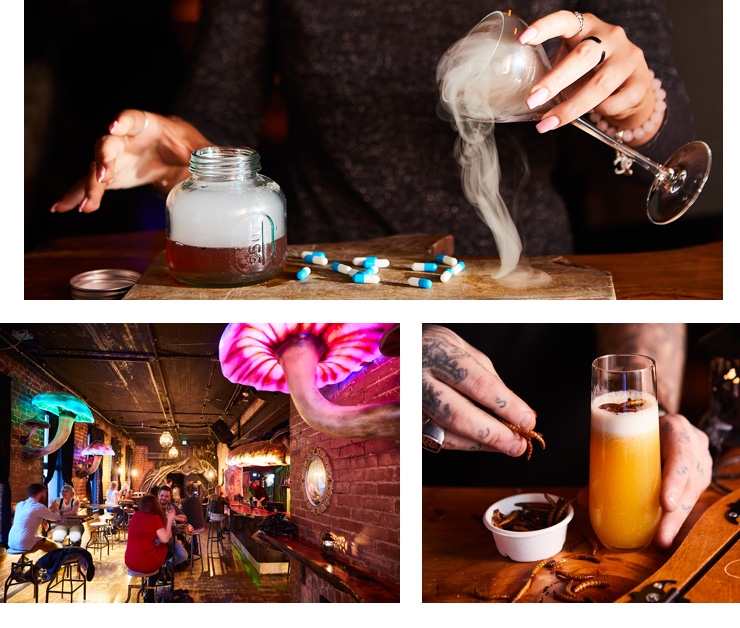 Now if you’re gonna open a concept bar, the concept has to be tight. And Storyville has a drinks list to match the theme. Bar Manager Zach spent a long time combing through literature for inspiration.

“Try these,” he says, holding out a jar of...wait, are those worms? “Truffled meal worms,” Zach says, “for the New York Peach. It’s a James And The Giant Peach Cocktail.” We take a cautious bite—they taste kind of like chicken. Sadly, no magical powers.

Zach’s felt fedora is easy to spot at the bar. Get him talking about cocktails and his eyes light up. “What else do we have?” he says. “Oh yeah, there’s a War And Peace. So we’ve got Stolichnaya vodka invaded by French vermouth. You can taste that smokiness of the cannons.”

The highlight of the drinks list might just be the DIY Polyjuice Potions. You get the gin, ginger liqueur, kiwi, basil and lime, plus your own little cauldron. All that's missing are the human hairs of your enemies (note: please don't add human hair to your cocktails).

Bar eats are limited to jaffles and cheese boards at the moment, but they come with some pedigree. Storyville has teamed up with the guys from Om Nom to build the menu. Think Three Blind Mice (triple cheese with Dijon and red onion) or Green Eggs And Ham (country ham, basil, eggs and English cheddar). If you’re after a midnight feast, they’re doing cheese and charcuterie boards, with a few Lavosh crackers and baby pickled figs scattered on top.

“We don’t pretend to be the best at everything,” Keti says. “So when it came to food, we wanted to partner with a team who really knew their stuff.”

The response to Storyville so far has been kind of nuts. Lines out the door, website overload. The usual Melbourne social froth. Partly that’s down to the quality of the execution—Steve and Ketie have really nailed the fit-out—but it’s down to escapism too.

The old Wah Wah bones are there (if you look really, really close), but this place doesn’t feel like a Melbourne bar. If you can suspend disbelief—and down a few nuclear strength cocktails—you might just get swept along in the story.

Want to learn more about Storyville? Turn the page...