What Your Coffee Order Says About You

It may be something you do with hardly a second thought, but the way you order your coffee gives an astonishing insight into who you are as a human being.

You might think you ask for a flat white or a macchiato because you like the way it tastes. False. As your friendly barista knows perfectly well, the choice you make at the café in the morning reveals everything about who you are, where you have been and what is running through your head.

Here is what your coffee order says about you: 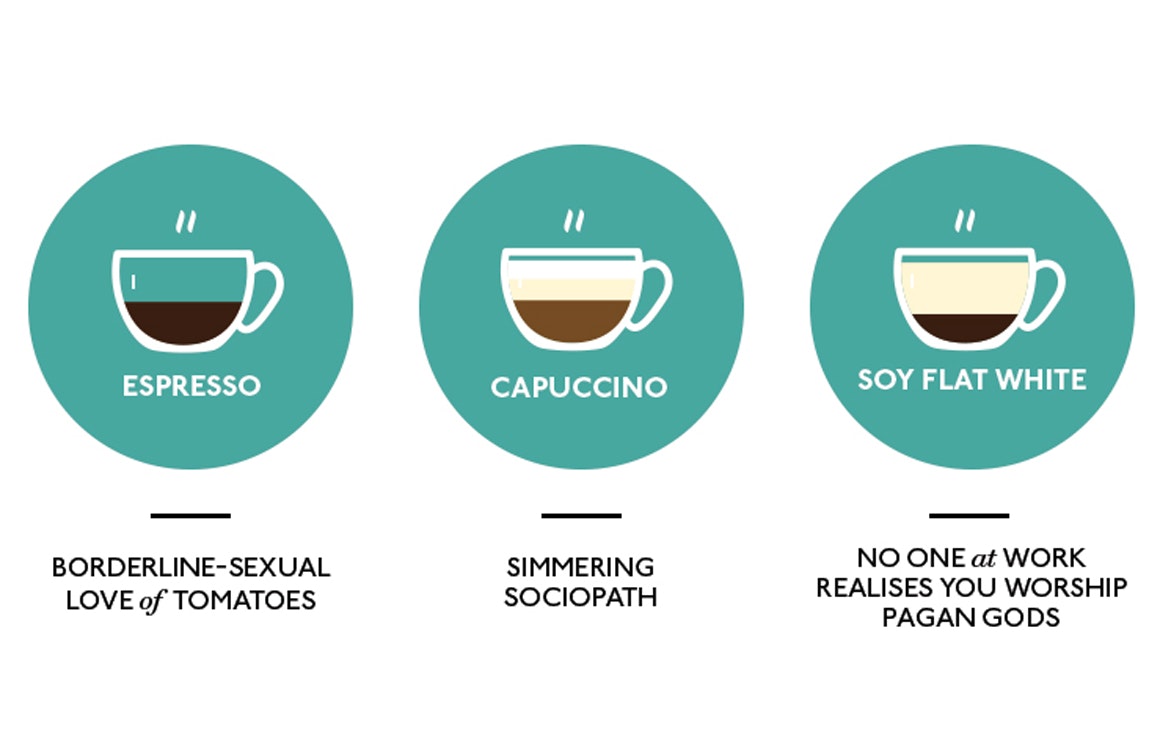 ESPRESSO
If you’re not Italian, you’re doing a good job of imitating an Italian. You undoubtedly have a penchant for gold jewellery and a borderline-sexual fixation with tomatoes. You may have considered writing an epic poem about woodfire pizza. To complete the picture, try standing at the counter to sip your espresso (while talking loudly) next time you go to the café, rather than sitting at a table. Sure, you’ll annoy the buggery out of the wait staff, but you’ll look swank doing it.

MACCHIATO
Your teachers at school called you a ‘dreamer’ but probably meant it in a derogatory way. You often lose sleep wondering who would play you in a biopic of your life. If the hoverboard has not been invented by the end of 2015 you will be genuinely devastated.

PICCOLO
When you draw the coffee cup to your mouth you also instinctively raise your little finger. If you don’t currently drive a Toyota Yaris, you will at some stage of your life.

AMERICANO/LONG BLACK
Coffee is something you do to pass the time between Ben Affleck films. You are eagerly waiting for 1950s-style bullet bras to come back into fashion. You wish you knew how to quit Myspace.

RISTRETTO
You see life as a kind of game featuring a series of elimination challenges. Every decision for you is a momentous test; every question a baffling riddle. You must be operating at 110 percent mental capacity at all times merely to subsist. All of this is why you favour the potent caffeine hit that comes with a ristretto.

CAPPUCCINO
Unless you only drink your cappuccino in the morning, you’re doing it wrong. Don’t let a Calabrian see you drinking one after 10am or you’ll end up sleeping with the fishes like Luca Brasi. Regardless, taking your coffee with chocolate sprinkled on top indicates you are either a big cuddly teddy bear or a simmering sociopath.

FLAT WHITE
The difficulty you have dealing with those around you is not actually your fault; rather it’s due to the fact you were born in the wrong place, in the wrong era. Your responses to everyday situations and ways of coping with conflict would be perfectly normal if you were living in the French Concession of Shanghai in the 1930s and making a living as a calligrapher, or perhaps waiting tables at a tea shop/brothel. Explain this to people when you first meet them and you will find things run a lot more smoothly.

SOY FLAT WHITE/SOY LATTE
Nobody at your work realises you worship Pagan gods.

CAFÉ LATTE
At the end of high school you were torn between becoming a priest/nun or trying your luck in the real world. Notice how life constantly baffles you? Let’s just say you made the wrong decision. Have you not yet heard of flat whites?

+ SYRUP
If Earth was invaded by an alien race, you would be the first to jump on board with the new regime. You are best friends with your cousin or another close relative. Your desire to add syrup to your caffeinated beverage suggests you may be suffering from Irukandji syndrome.

This article was previously published on our sister site, The Urban List.