What Does Your Dog Breed Say About You?

There’s an age old saying that through time, people start to physically resemble their dogs and, in some instances, it is freakishly and unfortunately true.

But here at The Urban List, we think we can DIG deeper and emBARK on a theory that’ll make you PAWS for a second and realise how true it is. So like a dog with a bone, we’ve sniffed out the best puppy personalities, and what they say about their owner. #woof 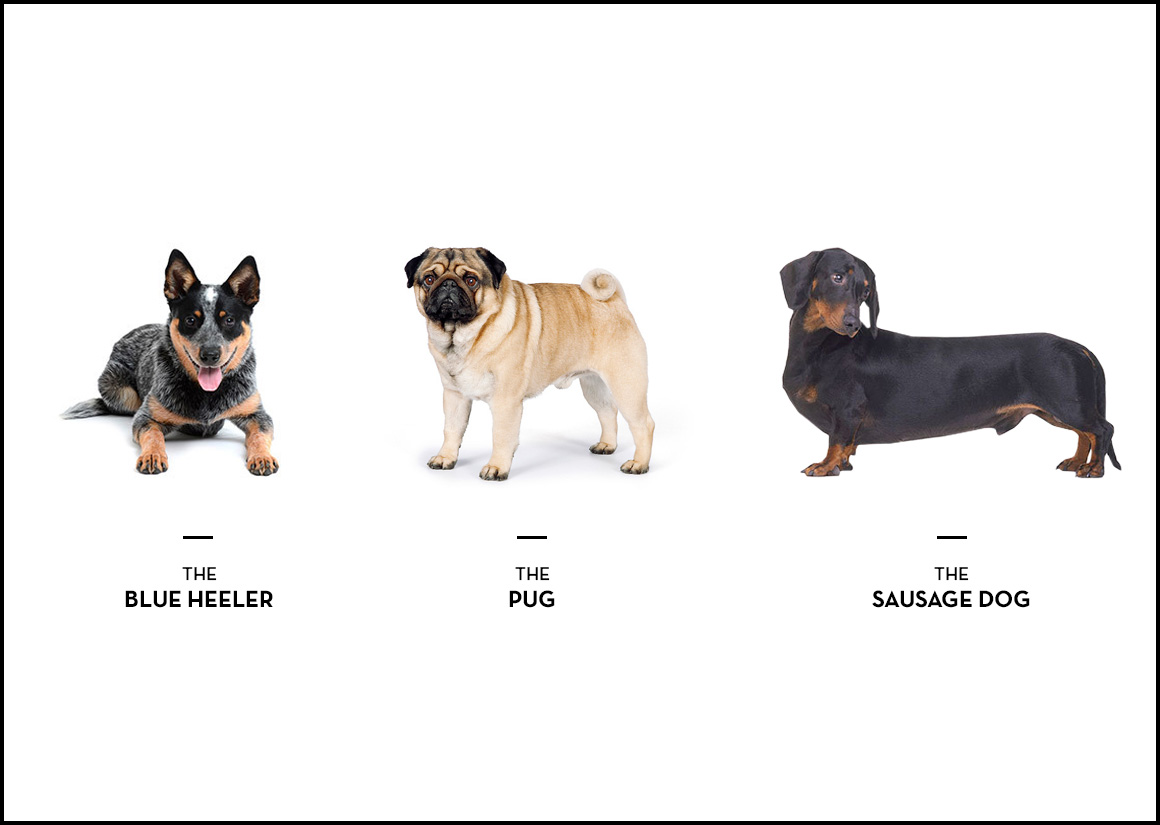 If you own a Staffy, there’s a pretty good chance you like muscles and tattoos, or so a walk on Burleigh Hill on Sunday would suggest. Staffy owners are aesthetic and like their dogs seem a lot tougher than they actually are. You can tell the Staffy owner in a group of people by telling a joke and watching the reaction times to see who laughs last. More often than not it’s the Staffy owner and you can’t help but say “Awww, bless”.

Aussiest blokes and sheilas you’ll ever meet, mate! They’ve even trained their Blue Heeler, usually called Rex, to fetch their VB tinnies outta the esky. Ah the Blue Heeler, what a ripper of a dog!

People who own Greyhounds obviously weren’t cuddled enough as a child, and therefore don’t understand the most essential element of cuddling—having a body. Cuddling a Greyhound, we imagine, would be like cradling a pile of kindling that is also trying to get away from you, while looking around nervously. Greyhound owners are usually very compassionate people, never forcing canine body image standards upon their dogs, who have the body fat percentage of a Gold Coast bodybuilder on comp day.

We’ve got one hot tip to increase your Instagram followers: get a French Bulldog. Actually, there’s a second hot tip: take photos of it and upload them to Instagram (that step is pretty vital). Owners of these strange looking cuties are usually the beautiful people. Tanned, toned, and fashionable they never seem to take a bad photo, although half of their face is usually blocked out by their Frenchie. In real life, they avoid going outside, as they are unable to walk 10 metres without being harassed by some random wanting a pat or a photo (y’know to increase their Instagram followers).

Pug owners are almost out of the loop now. The predecessor of the fashionable Frenchie, people bought pugs before they realised you could own a less confused-looking version of a pug with fewer breathing problems that will get way more Instagram followers. Pug owners are usually “fixers”. As in “I know he’s a jobless commitaphobe, but I can fix him!” or “I know she’s an alcoholic who let down my tyres, but I can fix her!” They see the best in everyone and everything, even if that thing looks like it just ran face first into a wall.

We’re saying sausage dog because it’s really hard to spell and pronounce Dachshund, and sausage dog is just so accurate. Side note: How on earth have these things survived evolution?! If you own a sausage dog you probably hate people calling them a sausage dog, because it’s a Dachshund, dammit! But it’s okay because you’re most likely a pushover who is regularly bossed around by your mini dog that resembles a food item sold from a van. So much so that sausage dog owners usually get a second one, just so they can plot the overthrowing of the human race together.

Very doge, much woof, many barks.

Usually reserved for owners of car impound lots (in movies) and hectic Jamaican guys in white singlets, Rottweilers are equal parts terrifying and scary. We know those two words mean the same thing but, seriously Rottweilers need their own word that means “inspires fear”. Owners of these bad-boys of the canine world are usually equally terrifying and that’s because they have somehow convinced Satan’s helpers to be on their side, and, what’s more, can reduce them to a whimpering, needy puppy dog at will. That’s some gansgter sh*t right there.

Labrador owners are usually families who have their lives together. Seven seater car, matching dining chairs, cutlery that isn’t from Kmart—they’ve really made it. But similar to these absolutely gorgeous bundles of doggy joy, Labrador owners are energetic, fun to be around, and love the outdoors so much they might, on occasion, take their Lab for a walk and not even document it on Facebook. They just ooze positivity, which can also be their downfall, leading them to be a little naïve. As in, it’s usually Labrador owners who send their credit card details to the Nigerian Prince…bless them.

We don’t care if you’re female or young; if you own this dog you are an old man.

Coming in a range of shapes and sizes, Poodle owners are very much like their furry friends, in that they are often underestimated due to their looks. Although, yes, they might have dyed their dog bright purple with a hot pink tail, and they may have just spent $120 on a puppy manicure, but they’re not total idiots. Poodle owners are the type to “accidentally” wear an airy skirt on a windy day and “forget” to wear underwear, but then, bam, next minute they’re giving you legal advice on how to get out of that parking fine. Smarts under the glitz, we applaud you!

Look, nobody wants to be the one to say it but Bulldogs are not attractive dogs. But, just like their owners, it’s what’s on the inside that counts! Bulldog owners are misunderstood and have a heart of pure gold. The only downside to Bulldogs is that they were unwittingly made the mascot of one of the worst NRL teams in the league. Sorry you have to go through that guys.

Husky owners are smart. Not because they’ve chosen a loyal and smart best friend, and not because they’ve somehow managed to control the amount of hair Huskies shed on a daily basis. Because no matter what you look like, you are instantly more attractive when you have a Husky by your side. That is why you rarely see Husky owners without their pals, because as soon as they’re separated, they go from a solid 8.5 to a 4. Don’t let that regal canine leave your side, friends. EVER.

You know the ones. You can hear the yapping in your head right away. And you look around to see what could be making such an agitating noise to find a tiny rat of a dog, not much bigger than a football, trying to intimidate you. And as you run away in fear you think “Who could possibly love that thing?!” Cat owners in denial, that’s who. Tiny yappy dog owners don’t realise it yet, but the characteristics they’re looking for in a pet actually traditionally belong to cats. Despises me? Check. Despises everyone in the whole world? Check. Makes me beg for love? Check. My only purpose to this dog is food and shelter? Check and check. Our advice? Get a cat guys, they’re quieter and they’ll hate you just as much.

Owners of these majestic creatures are the most sophisticated humans you’ll ever meet. They know which forks to use at a fancy restaurant and since birth have not once stumbled on a crack in the concrete. In fact, they don’t even seem to walk—they glide. Unlike other fashion dogs, they don’t crave attention. They already know they’re an absolute boss.