For The Love Of Vintage Clothing

The way we dress is an extension of who we are and most of us put considerable thought into our external presentation. Looking generic is something to be avoided, but at times it is near impossible finding a unique piece as the manufacturing mechanisms consume designer looks and churn them out to the masses.

One way of preserving sartorial personality is buying vintage and, over the last decade, vintage trade has gone through the roof for this very reason. Not long ago, we caught up with Mark Meredith of Deco Diva, and antique dealer, Janet Niven at the Sydney Antique Centre, to discuss all things bygone and beautiful. Janet owns a stunning collection of 18th and 19th century English porcelain, miniatures, and needlework, while Mark's extensive Art Deco range has seen a resurgence after many of his pieces featured in The Great Gatsby.

The agenda upon our return visit to the Sydney Antique Centre was purely one of fashion. Longstanding vintage clothing dealer, Lou Murray took time out to share the stories behind her eclectic collection and to discuss The Great Gatsby costumes she supplied.

Lou has been passionate about vintage clothing all her life and began collecting early on. This led to her Queen Street, Woollahra store and, finally, to the Sydney Antique Centre, where she has been located for six years.

The collection ranges from the Victorian period through to the 1970s—Lou does not collect post 1970s retro. Evening wear, bridal, menswear, hats, jewellery (Lou specialises in American-signed costume jewellery from the 1950s) and accessories fill Lou's vintage space.

Lou's clientele vary from collectors who focus on specific periods, to people wanting items for parties and those who simply appreciate beautiful vintage. 'I have a number of men of different ages who buy vintage formal wear and some clients who just collect accessories; there are two or three customers who only buy hats, so they have huge collections of hats!' Lou explains.

Over the last decade, Lou has found vintage to be hugely popular and the 1920s, specifically, has experienced a rebirth of late with The Great Gatsby.

'A lot of stylists come for films, theatre, and advertising . . . I, along with everyone in the centre, supplied props for The Great Gatsby; mainly clothes, tablecloths, and jewellery,' says Lou.

The Great Gatsby production placed particular emphasis on the Prada dress designs and Tiffany & Co. jewellery—Lou's pieces were mainly used in the crowd and party scenes. 'There were so many crowd scenes, so much theatre, it is amazing the attention to detail when you see so little really.' Lou continues, 'The production went to so much trouble, they bought a whole dressing table set for Myrtle's dressing table, which you don't even site, it is that sort of attention to detail'.

Here are some of Lou's favourite pieces:

To the left, is a beautiful late-Edwardian, hand-embroidered dress from 1915. To the right, is a 1920s drop-waist dress in pink lace, with satin trim, dressmaker made. 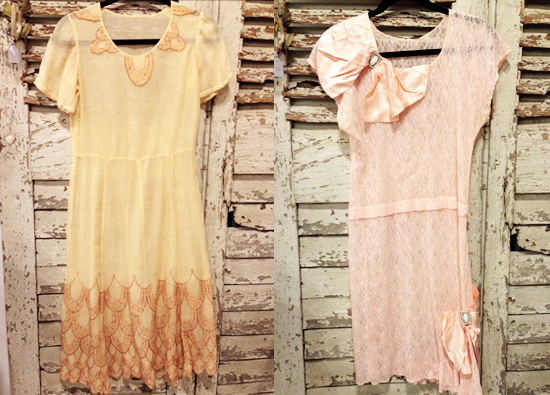 Below is a 1940s wasp-waist coat inspired by Christian Dior's 'New Look'. It was made by Cassano Couture in Double Bay—the premium dressmakers of the 1950s and 1960s. The red shoes are by Whispies, a 1960s brand that designed shoes for younger women and were considered a trendy label. 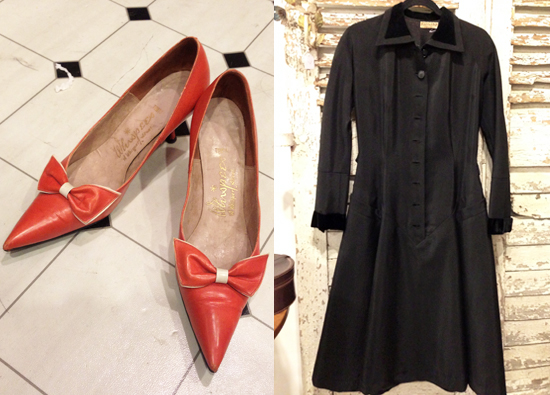 Lou's favourite couture period is the 1930s, 'I love the bias cut, and the dresses were very elegant, the satin bias cut with the big shoulder furs—very movie star glamour', she explains.

Below left is a 1930s burgundy-coloured, silk-velvet dress with a full skirt and moveable bow. Dressmaker made it is a depression-era design—you can see a number of joins where they have utilised as much fabric as possible and the zip is unusual due to availability being limited. Silk velvet today is hugely expensive. On the right, is a rare example of very early acetate fabric from the 1930s. This dress has not been worn, Lou obtained the dress from a Polish woman who brought it out to Australia in the 1930s and never removed it from her trunk! 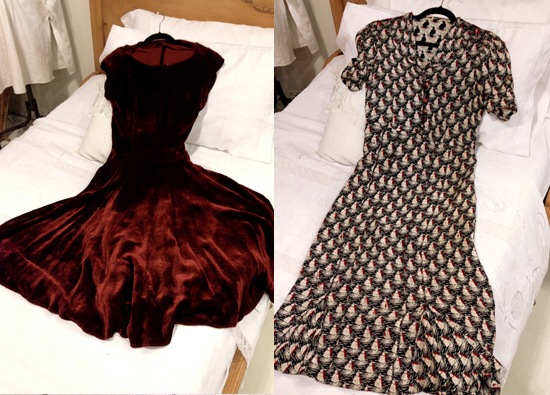 This cabinet features 1920s accessories. The red and black beaded necklace (centre) has a tribal feel, which was very popular in the 1920s (as was the Egyptian influence due to the tombs being discovered), this type of adornment was worn with a very plain flapper dress. The silk-flower headpiece, crochet bag, and bakelite cuffs are all typical 1920s eveningwear accessories. 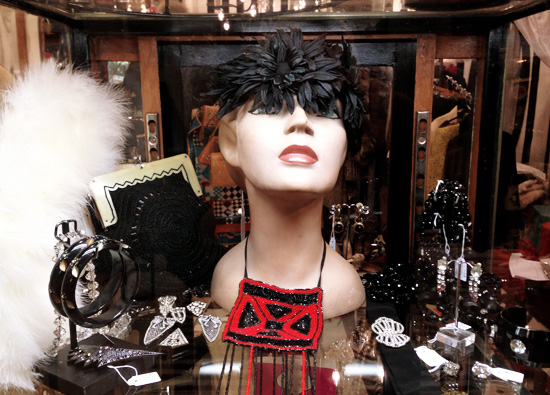 Two stunning handbags from the 1940s. The handbag located in the foreground is made of crocodile skin and lined with pigs skin, it features a bakelite handle. The bag behind is from America and made with alligator skin. At this time, all the bags were made with German fittings (handles and clasps). 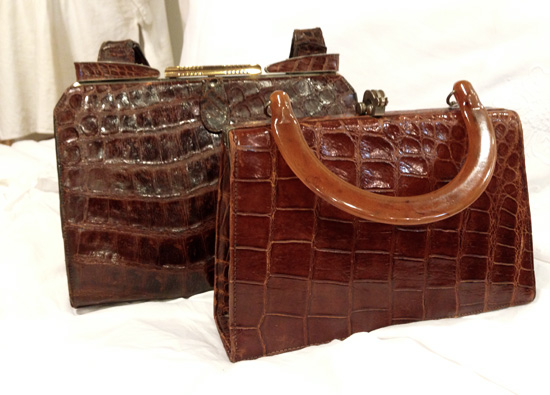 Beautiful 1920s cloche hats. The plain black design is by Tony Barret, who was located in Rose Street, Sydney during the 1920s and 1930s. The beaded cloche is by Ruby Lowe, another famous hat designer who was also located on Rose Street. 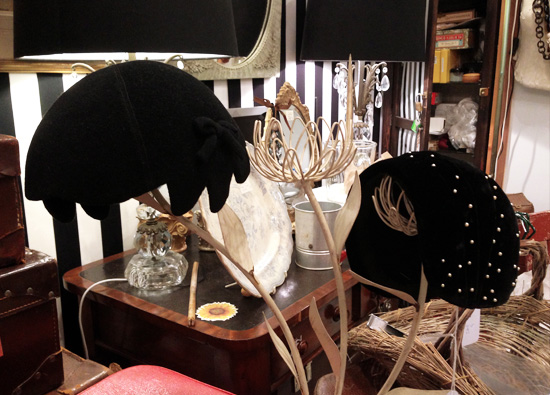