Wordlife Will Get You Going

Kato, aka Barney, aka Barnabas, is one half of the futuristic, soul, techno, house—duo that is Wordlife. Whether you cognitively know it or not; you have been on the dance floor losing it to one of Barney Hodgson and Adam Bozzetto's tracks already.

Whichever alter ego you are familiar with: deejay and FBi presenter Kato; all-round great guy Barney; or music producer/collaborator Wordlife, Barnabas Hodgson is a generous fellow. So much so, he has given us a free bunch of downloads—check out down below.

We caught up to chat music, Wordlife, what it is like having a genius-scientist father and all the best places to hang out.

TUL:  How did Wordlife come about? What inspired you and Adam?

Barney or Kato: We were drunk one night, bitching to each other that we both couldn't find anyone we clicked with well enough, to get a good, lasting, collaboration going. One of us had the bright idea that we should try working together, and three years later here we are.

TUL: What influences dictate your sound?

TUL: Wordlife has achieved the desired sound for sure. You have been deejaying around Sydney and Australia for sometime, can you tell us a few of your favourite clubs?

TUL: How did you get into deejaying and producing?

Kato: When I was younger, a lot of the music I was into [punk rock, hip hop, trip hop (remember that?), electronica (remember that too?) was actually easier to get on vinyl, and it looked way cooler, so I just started collecting. Then a few years later, a dude in a record store liked the records I was buying and asked me to play them, before and after his band's gigs—and everything just grew from there.

TUL: Trip hop yes, Tricky used to blow my mind. Where did the name Kato come from?

Kato: 'The Green Hornet'—Bruce Lee's character. I liked it because it has two syllables, much like my actual name Barney, but I wasn't ready to use Barney at the time. Now I have that one up my sleeve. It's nice to be disconnected from your own name—multiple personalities are actually super fun.

TUL: Love Bruce Lee, and multiple personalities are important. It sounds like a lot of fun when you host FBi Sunsets, any standout shows?

Kato: Over the years we've had some amazing guests, like Claude VonStroke, Pachanga Boys, DJ Funk, Justus Köhncke, Jamie Jones and many more. But some of the best times are just on our own, playing tunes and talking shit with my lovely co-hosts Anna Lunoe and Bad Ezzy.

TUL: I know you enjoy the finer things in life—can you tell me your favourite restaurants in Sydney?

Kato: I always have a lot of fun and great food at the various Dan Hong establishments (Ms. G's?, Mr. Wong?, El Loco etc.). Ichiban Boshi ramen is always a big favourite, The Dip in GoodGod for delicious hot dogs and off-the-wall desserts, and Spring River, Gumshara and Petaling Street in Chinatown are all faves too.

TUL:  And where do you like to have a drink?

Kato: I deal with big crowds gigging all the time so I really like places that aren't too busy. The Lord Wolseley in Ultimo is a great little local pub, with friendly staff, and other than that it's friends places or my balcony.

TUL: Tots. What was it like growing up with an ingenious, scientist father? Does he like your music?

Kato: It was always very interesting! He'd often do experiments at home, in the kitchen, with glow in the dark pigment and blended squid, always very stinky and messy. I think he's done so much weird stuff in his life that he has no choice but to 'get' my music, but I think he does genuinely like it too.

TUL: When you are back home in Newcastle, where are your favourite hangouts?

Kato: The Terrace Bar on Hunter Street and The Lass O'Gowrie Hotel are good spots for beers, 3 Monkeys Cafe does great breakfasts and smoothies. Newcastle and Merewether ocean baths are great for swimming, Dudley reserve and Glenrock lagoon are good for bushwalks, and Nobby's breakwall is good for morning and evening walks and fishing.

TUL: Sounds lovely. And now to the music, does your playlist have a theme?

Kato: It's a mixtape of Wordlife stuff and some recent jams we've been getting into of all tempos from all over the world. There are also a few free downloads in there for your readers' iPods. 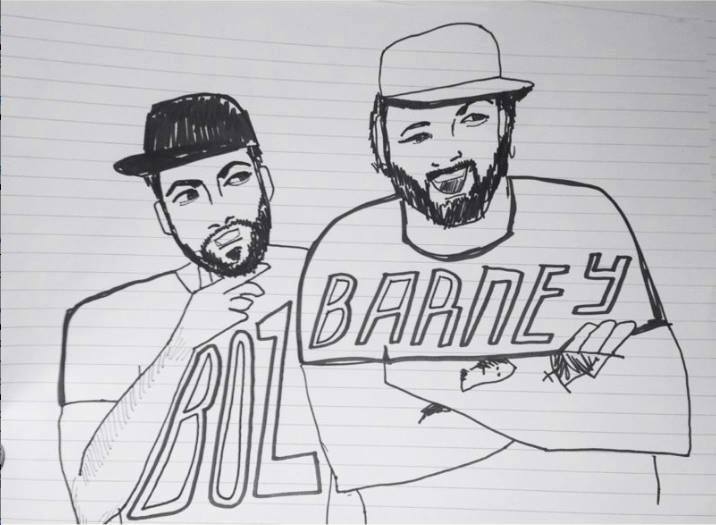 You can check Wordlife out live September 7 at GoodGod Small Club?, supporting Naysayer & Gilsun. For Kato, head to Hip Hop Wednesdays @ The Flinders Hotel or get to the FBi 10th Birthday Celebration. And for free, you can tune into Fbi 94.5 on Thursdays 6-8pm for Kato and Bad Ezzy Sunsets.