How The Bachelor Ruined Dating For Men Everywhere

The cause of single men in Australia has been set back years, perhaps even decades, by the irresponsible actions of one boneheaded exotic dancer from Perth by the name of Blake Garvey. I'm going to skip the obligatory line where I explain who he is in case you haven't heard of him, because, even if you would have preferred not to, you have been hearing all about him for days.

The Sam and Blake saga has been presented as though it's the Anna Karenina of our times by feverish tabloid newspapers and all-in-a-tizzy TV and radio presenters. And despite what you've been led to believe, the biggest loser here is not Sam, who is a stone-cold fox that has just been gifted a $50,000 ring and is now a bona fide, 24-carat B-List celebrity. She won't have trouble meeting another bloke, believe me.

No, the biggest losers here are the single men of this country, who have been made to look awful by this so-called shining example of bachelorhood. Unless I somehow missed the memo, there was no nationwide election held among unmarried men to vote in a Supreme Doyen of Singledom who could faithfully represent us all. Channel 10 producers are the ones who decide on what the ideal spouseless male should look like, and what a great job they have done of it!

So far they have a 100% record of choosing strippers. 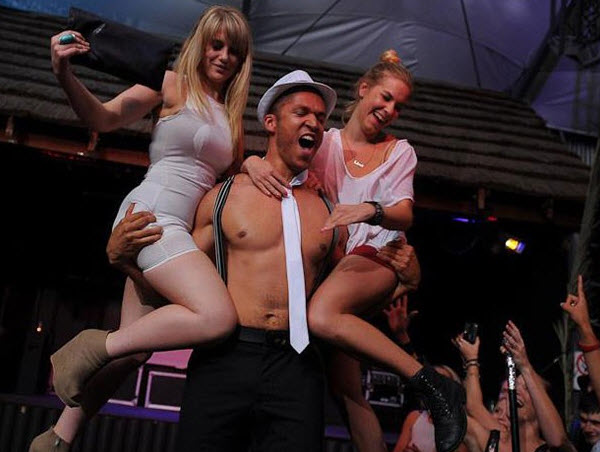 First of all, this makes the rest of us feel inferior. Blake the Flake, for all his personality defects, looks pretty darn good in a Nino Cerruti suit.

For the first few weeks of The Bachelor's second series, all I heard was girls gushing over the dude.

'He's tall and he's lusty and his voice is so husky,' they would sing.

'He's got muscles for days and his big brown eyes are amaze.'

'His skin is the colour of burnt sienna. He could do so much better than Laurina!'

'He's the kind of guy who would never play me. Oh Blakey, I want to have your baby.'

And so it went on. Blake the Fake was driving around in luxury sports cars, lounging bare-chested on super yachts, and taking his multiple girlfriends on a series of mega-dates. As a real estate agent slash burlesque dancer, there is no way he could have conceived of any of these fairy tale dates, let alone paid for them, so this was, I assume, all set up by his billionaire wingman, Osher.

Not only that, he always knew the right thing to say at the right time, and his girlfriends were just lapping it up.

And here the rest of us are trying to charm the ladies with 2-for-1 steaks at the Caxton and discount movies on Tuesday date nights.

After a while, though, The Spatula's veneer of perfection began to slip. Despite telling each and every girl how he was falling for her, he had no problem tashing on to every other girl. The sweet nothings he was whispering in their ears sounded almost too perfect. It was almost like he was reading them off an autocue (and that he hadn't learnt to read beyond a Grade 5 level). It started to become apparent that the perpetually dazed look on his face wasn't a doe-eyed innocence, but a sign that he wasn't, in fact, very bright at all. He also had this weird insistence on shovelling food into his dates' mouths.

As he whittled down his pool of love interests to a smaller bevy of beautiful and vivacious young women (poor guy, having to cut loose the less-than-perfect ones), it became clear to those of us watching at home that he was kind of a sleazeball.

He was stringing along all these bachelorettes, while well-and-truly keeping his options open.

For ladies watching at home, the refrain soon became, 'Why are men such bastards?'

Thanks, Blake the Snake. Could you make it any worse for all the real-life bachelors in Australia, who have a hard enough time as it is convincing members of the opposite sex that there are actually some of us out there who are genuinely nice chaps, and not just trying to play the field?

Apparently, yes he could.

To cap off his performance as a Master Douchelord, Blake proceeded to dump the winning bachelorette, Sam, before the show had even finished airing. And this was after he had proposed to her in the finale.

Sam! Gorgeous Sam. What kind of bizarre West Australian male stripper world do you live in where that bubbly babe is not good enough for you, Blake??

The reputation of Australian single men is ruined forever. If you haven't partnered up already, your chances are now officially shot. Women are fed up. Get ready for a life lived alone.

And it's all Blake's fault.