Meet the Bartender | Luke Ashton from This Must Be The Place

I am 99 per cent sure this is the place and only 3 per cent sure I am still sober. I walk in to the bar on a Thursday and it feels very European in a non-Ikea way. I am warmly greeted by some sort of Scandinavian mahogany mash-up feat. finely dressed men and I am immediately impressed. One has an almost beard and is dressed in subtle chambray, a tailored leather apron and chinos. There is music in the background, something alternate—maybe Safia. Yes. This is definitely the place and this is definitely the guy.

You might remember Luke Ashton from such Surry Hills bars as Vasco, or perhaps from his debut as Diageo’s 2013 World Class Bartender of the Year. No big deal, but word on the street is this guy can really pour a drink and boy does he know how to own a bar because sexy bespoke fit out and above average charisma. I am suddenly way DTD (that’s Down To Drink to the rookies) and make my way towards the place of liquor because proximity calls.

Welcome to This Must Be The Place, a newly found Sydney small bar on the Darlinghurst side of Oxford Street, which Luke co-owns with friend and comrade Charlie Ainsbury and has been in operation for five sweet months. Cutely known as TMBTP, the bar is a chic, gallery-esque style space that’s really driving its way through the minimalist trend what with its trimmings: soft lighting, matte black wall lamps and Sycamore wood finishes. I feel like a young college girl on a Swedish gap year and I am making this bar my oyster! Whatever its true jibe, it’s a fancy treat to a rather desolate part of Darlo and it plays host to a warm and friendly vibe where even the worst of velour tracksuits would be welcome. 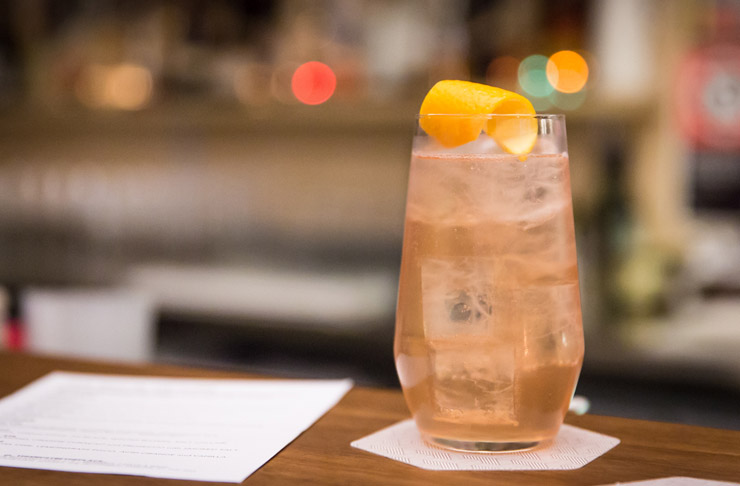 So come in, sit down with me, loosen your drinking pants, welcome to some of the hottest bartending you’ll find in this town. Like most serious bartenders and bar owners alike, Luke knows his stuff (way more than you and I), particularly the ins and outs of the Spritzer which remains the moniker on the menu. That’s right Mum, get out your power suit, the Spritzer is in vogue again and it’s had it’s 80s haircut removed in place of something a little more contemporary.

Traditionally a Spritzer is simply wine and lemonade, but Luke makes my friend and I The Gloss, a delightful affair of watermelon Riesling, Ketel One Citroen vodka, strawberry shrub and rose water. It’s like a party in my mouth and no one’s invited because I’m keeping this deliciousness to myself. Open from 3pm, TMBTP has really gone for that aperitif style, “We looked to Europe for that relaxed afternoon business meeting spritzer style,” says Luke as he takes a sip from his beer. And he must be right because we all know Europe’s basically better at everything, sans Greece.

Like with any service, we know it’s not just the product that rings in a winner, it’s the full meal deal and 360 degree experience. “It’s not always about what’s in the shaker, it’s about what’s on the other side of the bar,” Luke tells us. There is nothing worse than a bartender with a superiority complex and I imagine Luke to be a very humble, quietly achieving sort of guy that puts his many trophies in a box somewhere in an attic. This is 2015, bartenders are no longer out of work actors that ‘tend on the weekends and sleep on their uncles couches between hookups. Luke is a pro and his bar meets those high expectations. 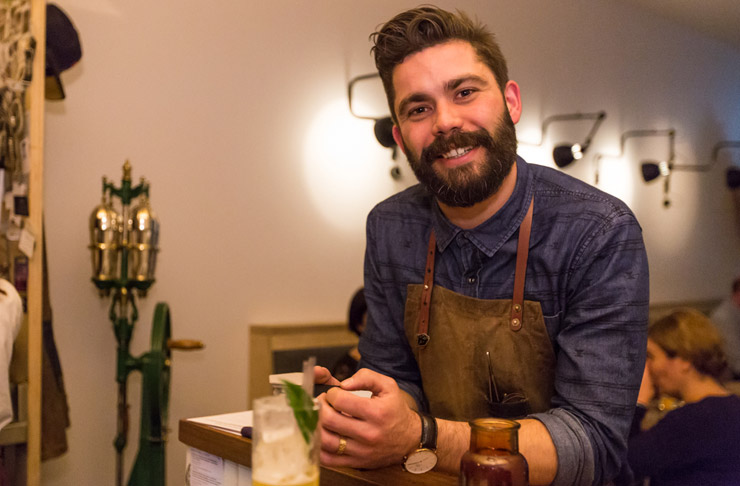 Luke’s intention behind TMBTP was to be like an extension of your living room, comfortable and inviting, which I love because I hate leaving mine. He also refers to bartending being like rock n’ roll because in everyone’s eyes you have the keys to the booze and similar to Cheers, everybody knows your name. With a gentle dapper manliness, Luke looks like the type that could appear in an Old Spice commercial from the 60s, but cool your love jets ladies, he’s married.

Clearly one of the best, Luke suggests a relaxed style of enjoying yourself at TMBTP. “Come down, have a few glasses of wine, maybe a cheese plate and enjoy yourself. We’ll look after you.”

So if you want to be served by the best and maybe take a very short trip to Sweden, this is your guy and this is most definitely the place.

Drinks served on the night