Nothing is awful when you’ve got a waffle by your side. And baby, we’ve got Sydney’s best waffles to keep you company.

Hellooooo enthusiasts of Hello Kitty, the Hello Kitty Diner is home to Sydney’s cutest waffle and eager for you to chomp it on down. As you’d expect, the waffle is shaped like H. Kitty, providing a kawaii take on the American diner classic of Southern fried chicken with waffles—a sweet and savoury combo that is certainly going strong in Sydney. Think fresh and crispy waffle batter with crunchy boneless pieces of fried chicken, drizzled with bourbon barrelled maple syrup. Though it’s not as familiar as a meat pie with tomato sauce, this flavour combo works, and with a menu designed by Warren Turnbull of Chur Burger, you know you’re destined to mop that syrup up like the delightful and efficient human mop you are.

Where fried chicken + waffles are a cornerstone of Sydney waffle culture, Roastville have thunk up a killer twist on this local fave by adding kimchi. Kicking some Korean pizazz up the wazoo of American cuisine, topped with crunchy golden fried chicken, creamy Kewpie mayo, punchy sriracha sauce, rocket, and parmesan, Roastville’s generously-generous waffle is a garlicky, tangy delight. The waffle batter itself also stars kimchi, and will remind Korean cuisine kids of Korean kimchi pancakes. But when eating this beauty, remember to dig in before the waffle gets soggy!

The heat is turning up in Paradise Road because they are serving up this little waffle bomb with aplomb. An exercise in flavour balance, you’ll lose it over Paradise’s waffle with fried chicken, pomegranate, Canadian maple syrup, blistered jalapeño (beware of blistered tongues, rookie chilli fiends!) and a side of coleslaw, loaded with capers. These house-made golden waffles are all about crunching in tandem with that deeply deep-fried, tender, battered, boneless chicken. Luckily for you and your digestive organs, the pops of acidity from the pomegranate jewels and the burn from the jalapeño save this delight of a dish from becoming a stodgy hodgepodge of brown crunch.

Once you try the riotously popular butterscotch waffles that Hotel Centennial have been drizzling onto patrons’ plates since their revamp, you will understand what all hullabaloo is about. Fluffy on the inside, and crispy on the outside with that legendary butterscotch sauce and butterscotch fudge ice cream, Chef Justin North is keeping it classic and deceptively simple with this refreshingly traditional waffle, made with North’s not-so-secret-anymore ingredient, pearl sugar. 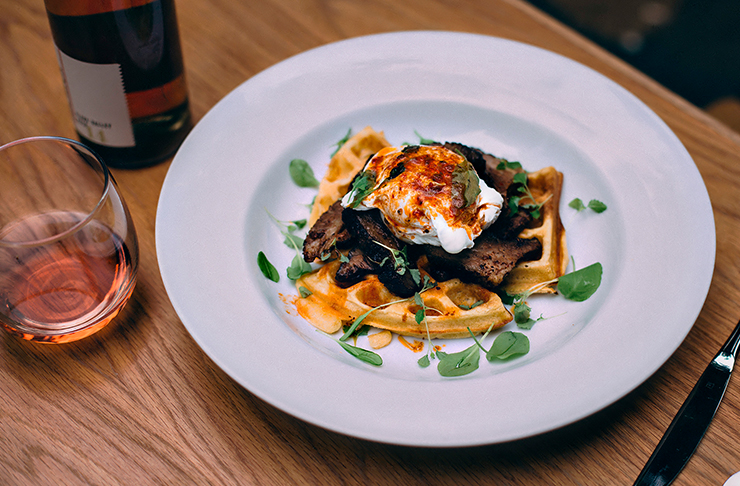 Waffles are definitely taking a turn for the savoury in Sydney and the Kansas City Shuffle beef brisket waffle is really something to write home about. Served with smoked chilli butter, this crispy waffle is dressed with the runny, oozy yolk of a poached egg—the crown of this king of waffles. Put the light, spongy insides of your waffle to good use to soak up dat egg and chilli butter. The chilli is the soul mate of the brisket, giving it the little kick that bumps this waffle up another level. But said brisket ain’t just any ole’ brisket. Dry-cured overnight; hot-smoked over wine-soaked hickory chips; and slow-cooked for six hours, it is super easy to re-create at home, folks!

Inhale the aroma of everything that is good and pure in life when you get your made-to-order Belgian waffles with melted chocolate and ice cream alongside a cup of the best coffee Manly has to offer at Barefoot Coffee Traders. At once sticky and chewy, this waffle is best enjoyed after a morning stroll along the beach, away from the seagulls who will steal waffle from outta your gob if you don’t chew with your mouth shut. Ah, the serenity.

Pagoto Gelato & Waffle House is filled with the scent of batter metamorphosing into crispy, large waffles; made to order, just for you. Wit one hell of an array of waffle combos to try, belts should be left at home when diving into waffles served with diet-unfriendly amounts of fresh ricotta, walnuts, cinnamon, and honey, or with smashed pavlova, strawberries, passionfruit sauce, and a big fat scoop of in-house made French vanilla ice cream.

Doughbox Diner are alllll about waffles and boy, have they got them down to an art. Crispy, not too eggy, and loaded with all sorts of sweetness, like chocolate and vanilla bean ice cream, crushed Oreo and Tim Tam, chocolate fudge sauce, white chocolate chips, and whipped cream, you’ll be whipped by the cookie madness waffle. With seven kinds of waffles on offer, it’s hard to pick just one, which is why we suggest inviting your loved ones for a smorgasboard of sweetness. Waffles are freshly waffled on the spot, and stay crispy under the oozy sauces and twin scoops of ice cream because they are just that good.

Café Giulia are experts in the Belgian waffle, a waffle that’s lighter, fluffier, larger, and in possession of deeper pockets (the kind of pockets all of us can afford) than its contemporaries. Café Giulia fill up those deep pockets with tangy poached rhubarb, which pairs just so dang well with their brown sugary, maple syrupy yoghurt and mascarpone. Packing a textural crunch and creaminess that will persuade savoury waffle enthusiasts to embrace the sweeter side of life, this is a very clever waffle.

Keep that winning streak going with our list of the best avocado on toast in Sydney.