Forget everything you thought you knew about spin, there’s a new, super slick cycle class on the Sunshine Coast and you’re going to want to get involved. We’re talking the chance to burn up to 500 calories in a single session.

Yep, now we’ve got your attention.

While hitting the gym can be a bit of a slog at the best of times, Barre & Bike is a total game-changer, offering fun unique dance-based workouts, you’ll actually look forward to.

For starters, this new luxury studio set in the heart of Maroochydore is like no other. With lofty five-metre-high ceilings, a high-end reception area and two dedicated workout rooms, it’s the perfect spot to zone out, get sweaty and escape day-to-day life. 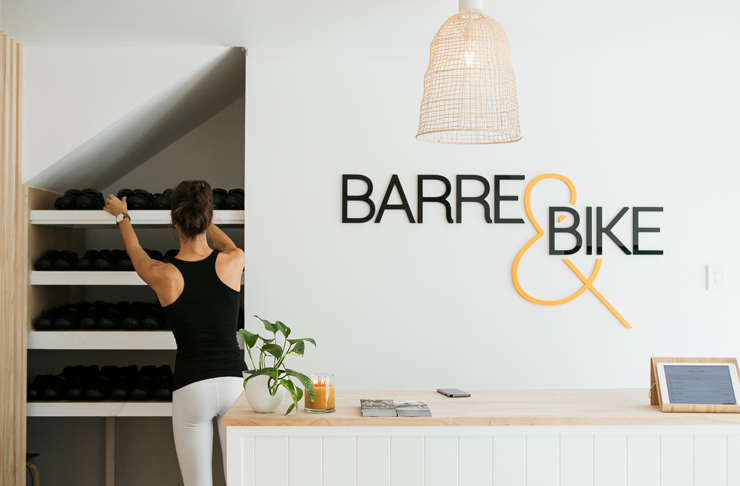 The fitness hub specialises in two completely different workouts—barre and beat-based cycling. And it’s the latter that’s literally getting our heart’s racing.

The first of its kind on the Sunshine Coast, beat-based cycling is, put simply, a dance party on a bike. With music blaring, lights turned low and a total disco vibe, you’ll be pedalling to the beat while doing your best to keep up with the upper body choreography. It’s a full body burn, but one you’ll get addicted to pretty quickly.

Once you’ve signed in and locked in your bike, you’ll be given a pair of legit cycle shoes, the type that the Lycra-wearing pros wear that actually clip into bike pedals.

The real action happens when you step into the studio. The space is a mix of nightclub neon meets serene vibes. It might sound odd, but seriously, it just works. Each session runs for 45 minutes and is led by one of four friendly trainers who will get your blood pumping, before finishing with a candlelit stretch.

Word on the street is it takes around three classes to really get into the groove of beat-based cycling, so pick yourself up a Barre & Bike introductory offer of $50 for two weeks of unlimited barre and bike classes.

And if you’re still not feeling motivated, just a reminder that each class can burn up to 500 calories. That’s a win from us.