Crunch Into Moreish Eats At This Vegetarian Beachside Cafe

Opening its doors in early December, after a speedy three-week renovation, Ours. Cafe & Goods is the new vegetarian and vegan eatery you need to put on your radar.

Taking over what was the colourful and bright Coco Loco Club, the folks behind Ours. (also owners of Moffat Beach’s The Pocket) wanted to create something new for the area. 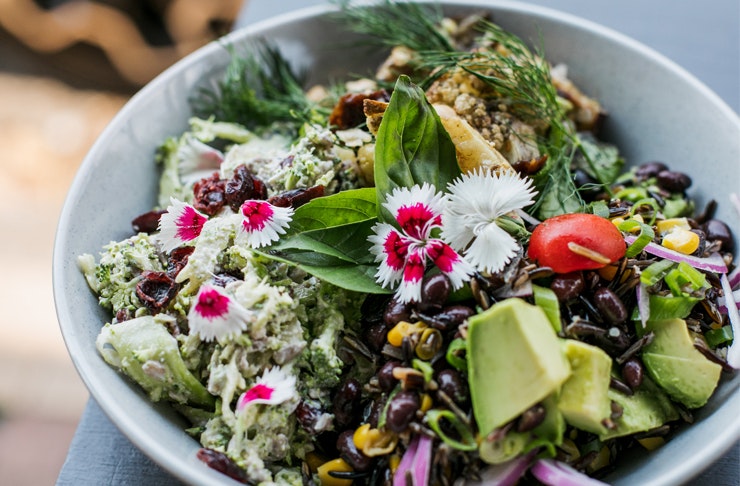 Its back-from-the-beach location (but still in the main hub), means this will likely become the spot where the locals hangout, away from the summer crowds.

The all-black and timber exterior is striking and not what we’re used to seeing against a backdrop of ocean. But, it speaks volumes to this team’s goal in doing something different.

Inside, it’s as homey as cafes come. Walls are painted in a deep green, there’s raffia-style pendant lights hanging over a custom-made velvet booth, plus there’s a bunch of friendly faces manning the counter who will make you feel as if you’ve stumbled into a friend’s abode, rather than a buzzing eatery.

And while the interior is what will pull you in, it’s the food and drink offering that will have you either planting yourself in one of their cosy nooks or grabbing a bunch of healthy takeaway packs to enjoy with your feet in the sand.

The cabinet is jam-packed with goods that are freshly-made from local, spray-free or organic ingredients, so you’ll find no nasties here. Crunch through epic toastie combinations, like the eggplant, pumpkin, vintage cheddar and spinach with a lashing of spicy coconut aioli on charcoal sourdough, good-for-you salads that are as tasty as they are pretty, or slice through the gluten-free vegetarian or vegan tarts. For the sweet tooths, you’ll find it hard to resist the vegan blondie brownies or the vegan choc chip cookies.

Then, wash it all down with a smoothie or juice, turmeric lattes, Guru coffee or a refreshing iced lavender tea, garnished with edible flowers—this one is magical, in that it changes colour when you add lemon juice.

For those that like to pull things together at home, Ours. is also selling fresh bread from Ten Acres, their own housemade dukkah, and even creating picnic boxes—you can pre-order a vegetarian or vegan spread for the beach, including their housemade hummus, dips, cheese and bread. How cool is that?

Ours. is now open six days a week (closed Wednesdays) from 7am to 2.30pm, so drop in this summer and see what you’ve been missing out on.

What: Ours. Cafe & Goods
When: Open six days (closed Wednesdays) from 7am to 2.30pm
Where: 3 Roderick Street, Moffat Beach