It’s official! One of our favourite Sunshine Coast restaurants, Rice Boi has just expanded, adding to its already epic fit-out with a waterfront beer garden. And we’ve got your first look.

Channelling those lush restaurant gardens you’re likely to come across in Bali or Thailand, an afternoon here will have you feeling like you’re on a tropical holiday, minus the price tag of an airfare.

Step over the threshold from Mooloolaba Wharf to Rice Boi’s Asian garden, and you’ll be greeted with bucket loads of plants, full-size tree trunks, red paper lanterns, a fully-stocked bar complete with the restaurant’s infamous neon signage, plus 130 extra mixed seats, from comfy lounges to stools. 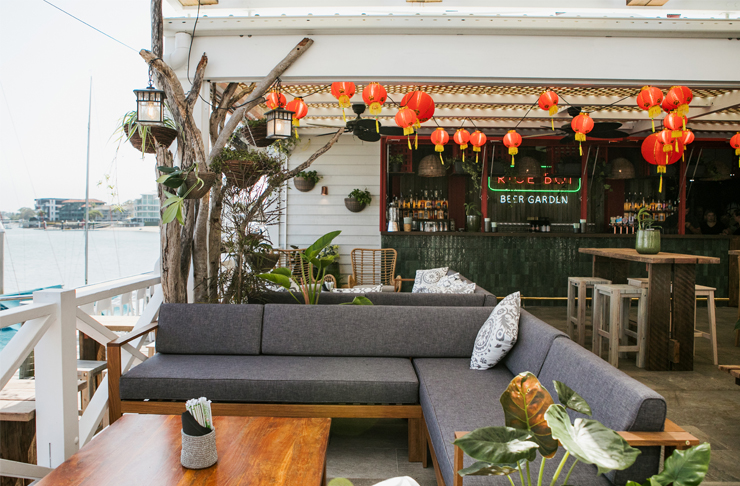 Sprawling out to take over neighbouring Hamptons-style fish and chippery, Saltwalter, the complete refurb took six short weeks, and the result is incredible. Trust us, you’ll struggle to remember what the area was like before it became Rice Boi’s waterfront beer garden. The only thing that remains the same is that view.

With the new space comes a more refined beer, cocktail and wine list—just another reason to start clearing your weekends now. From espresso martinis on tap (yes, you read that right!) to the fruity Giddy Geisha—think: citron, triple sec, watermelon, yuzu shu and a delectable sherbet rim—you’ll struggle to stop at just one.

Spritzers have their own menu, titled Bitches Love Spritzers, and range from the Misdemeanor with hannya, prosecco, honey syrup, lemon and soda, and One For The Blondes; a mix of pampelle, vodka, prosecco, lemon, tonic and soda.

With all the day-drinking that could go on, you’ll be pleased to know that the beer garden is serviced by the full Rice Boi food menu, so if you’re craving some dumplings or bao to line the stomach, you’re in luck!

In addition to the beer garden, the team have also added more seating along the wharf, meaning you can almost sit anywhere in this Moololaba restaurant and get smacked in the face with awesome river views.

Plus, bridging the gap between the beer garden entry and the restaurant entry, you’ll find a totally new live chef station, where you can watch on as Rice Boi’s maestros roll dumplings and spring rolls. They’ve seriously thought of everything.

Rice Boi’s beer garden is now officially open the same hours as the restaurants—seven days a week, from 11.30am until 9pm. But take this a warning, this restaurant already gets slammed, so if you want to bags a seat in the new garden this weekend, get to Mooloolaba early or risk experiencing the dreaded FOMO.

And for Saltwater fans, don’t shed a tear, your go-to for a delicious chip butty or super-fresh fish is simply shifting into The Wharf’s nearby laneway and will re-open in the leadup to Christmas.