An Outdoor Bed Cinema Is Popping Up In Perth Next Week

Ever wanted to go to the cinema but were too lazy to get out of your comfy bed? Well, this year you’ll be able to watch a movie under the stars in a giant bed, courtesy of the Mov’in Bed outdoor cinema.

Instead of just the usual picnic rug and bean bag spiel, Mov’in Bed cinema brings in a whopping 150 queen size beds with LED-lit bedside tables, comfy pillows and even a blanket in case it gets chilly. The beds range from $40 for a single person to $74 for a couple and can fit up to three people each, but if you’re strapped for space or cash, you can BYO picnic rug and sit on the grass in the designated picnic area.

And if you’re one of those degenerates who likes to eat in bed, there’s also a ‘Dine-In Bed’ option that’ll let you spread crumbs without actually having to clean them up. Your favourite pop-up restaurants will deliver your favourite food straight to your bed and you can, of course, also sip on wine or beer while livin’ it up. 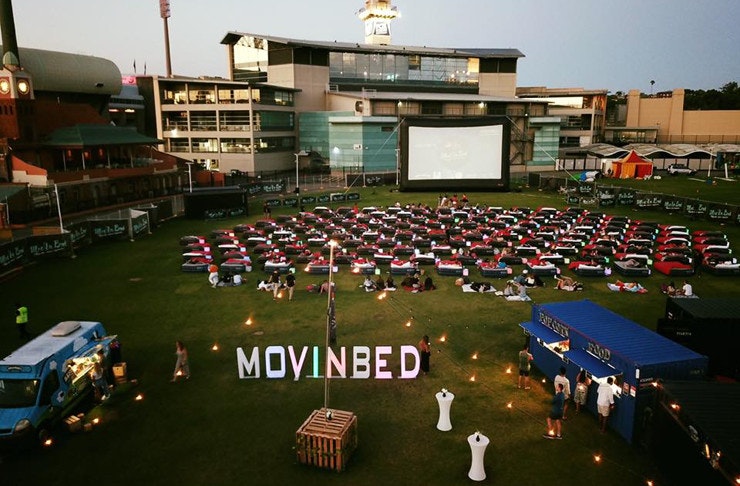 Mov’in Bed Season 1 launched in 2016 in Sydney and sold out in two weeks. The event has since been a Sydney favourite for four seasons but it will finally make its debut in Perth next week. Kicking off on 18 October and running until 10 November, you can expect flicks like The Lion King, Shazam, IT Chapter Two, Joker and The Goonies. The first screening of Once Upon A Time... In Hollywood has already sold out, so you better act fast.

Did you hear a horror-themed VR film festival is coming to Perth? Read all about it here.