Where To Get Cultured In Perth After Dark

Getting your daily, weekly, monthly or even yearly dose of culture can be tough. We know. We get it. You’re just super busy finishing your third Netflix series of the week (no judgey eyes, we promise).

That’s why we’ve teamed up with Wilson Parking to bring you this neat little list of the best cultural events happening in Perth this February. They’re all on after dark, so you can’t use work as an excuse. #Sorrynotsorry.

Go with your mate (or a date) and don’t let the idea of parking scare you off because Wilson Parking totally lets you Book-A-Bay (yes, you can pay with Amex) and secure yourself a park, without the stress, before you even leave the office. Genius? 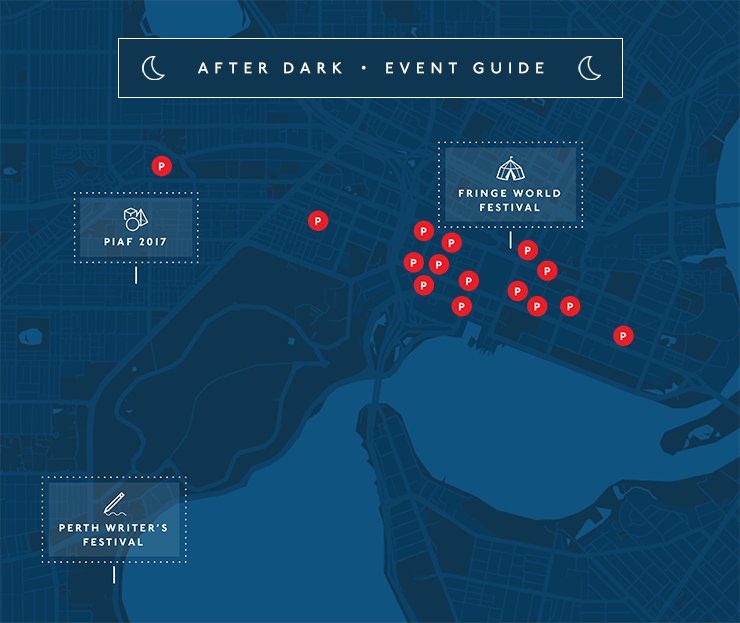 It’s Fringe Fest time all over again and we’re pretty certain it’s our second favourite time of the year (after Christmas, der). The hot days become balmy nights and you can get out and about almost every night of the week (without having to worry about parking, thanks a bunch Book-A-Bay). Whether you want to see cabaret, comedy, theatre or a have a full blown interactive artsy experience, there’s plenty going on in the city and around the outskirts of Perth—there's even some events on the coast.

When: 20th January to 19th February
Where: Various locations throughout Perth
Cost: Get the deets here

PIAF is back and it’s bigger and better than ever, so do your brain a favour and get amongst the brilliance created by artists from all over the world. More than 700 creatives will descend upon our sunny city over the course of a month, including a Vietnamese circus crew and a bevvy of live performers, meaning you’re guaranteed to see some fascinating (and sometimes controversial) entertainment.

When: 10th February to 5th March
Where: Various locations throughout Perth
Cost: Get the deets here

If you’re looking for a little bit of life inspo we suggest you sit yourself down at the Perth Writer’s Festival to get that thinking cap back on. Authors from far and near, including Clementine Ford, Sebastian Barry and Julie Koh, will all be making an appearance, and there are plenty of events you can get involved in that don’t have anything to do with reading or writing. Music is lyrics you guys.

When: 23rd to 26th February
Where: Various locations throughout Perth
Cost: Get the deets here

So come on Perthies, Book-A-Bay then go get a healthy dose of bloody culture!

Editor's note: This article is proudly sponsored by Wilson Parking and endorsed by The Urban List. Thank you for supporting the sponsors who make The Urban List possible. Click here for more information on our editorial policy.