Busselton is often overshadowed by the lures of shiny new cafes in Dunsborough and the wineries of Margaret River, but the brand new brewery Shelter Brewing Co might just sway you to stay in Busso instead.

The sustainably built brewery is sitting pretty on the Busselton foreshore with a 100-kilowatt solar panel system which should produce upwards of 80 per cent of the breweries energy requirements. The external walls are clad in Corten steel which is designed to rust over time to form a protective layer and add to the rustic appearance they're going for, while floor to ceiling windows provide loads of natural light while offering up some pretty epic views of Busselton's famous jetty and Geographe Bay. Thanks to this natural light, they've also been able to plant silver birch trees inside which will add some serious wow-factor when they start budding. 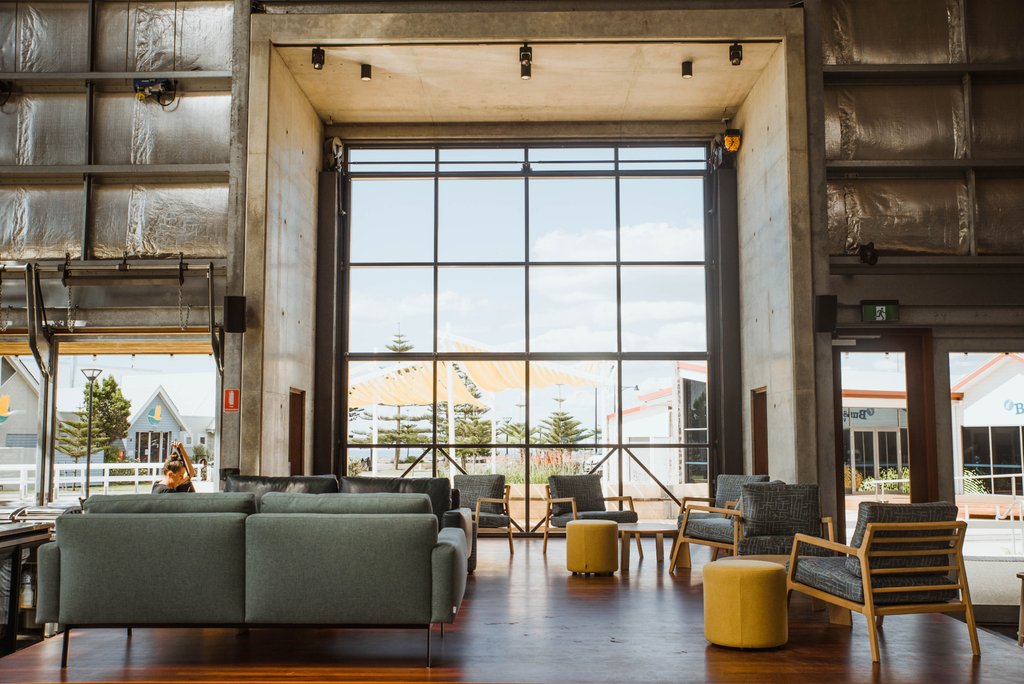 The best part though? The 650-person venue is built around the working brewery which is completely open so you can have a gander as you sip away at your craftie and appreciate where it came from.

Speaking of the beer, Head Brewer Jason Credaro worked his way up the ranks at Little Creatures before heading over to Victoria for a gig at Brick Lane Brewing Co. Most recently, he was the Associate Director of Craft Brewing Operations at AB InBev over in South Korea; so yeah, you're in pretty good hands here.

With plenty of top brews to choose from, we suggest you start by picking up a beer paddle for $15 so you can taste your way through more than one at a time before settling in for a few pints of your fave.

If you are sticking around for more than one, you'll want to tuck into some of their beer-friendly bites. Think chip butties, juicy burgs, woodfired pizzas, and a melt-in-your-mouth 12-hour slow cooked beef brisket. Plus, dessert fiends will be happy to hear there are a few sweet treats to round out your meal, including faves like their sticky date pudding and choc tops.

No matter what you choose to eat or drink, though, you'll feel right at home. The whole venue and experience was designed to feel relaxed, welcoming and genuine. So sit back, soak up those stunning views of the bay and enjoy.

General Manager Paul Maley says “Shelter is more than a craft brewery, it’s a place for locals to meet, families to get together and visitors to include in their itinerary of Busselton. We’re really looking forward to welcoming everyone.”

The brewery at Shelter Brewing Co is now open 7 days a week, from 10am-10pm. If you happen to be down there before the brewery opens, though, you can pop by to Shelter Cafe from 7am for expertly brewed coffee using beans from Margaret River Roasting Co, as well as house-made cinnamon scrolls, Rise and Co bagels and Millers Ice Creamery choc tops.

Looking for something closer to home? Hit up the new brewery opening up in South Freo.