Found | The Coast’s Most Drool-worthy Ribs

Who doesn’t like a good ol’ plate of smoking ribs, covered in a sultry dark sticky sauce and accompanied by a heap of fried potatoes and a frosty beer?

We personally think a well-cooked and orchestrated plate like this is God’s sign he loves us. Fred Flintstone is even a huge advocate of ribs, and he can’t be wrong. The Yanks like to claim pork and beef ribs as part of their national cuisine, but truth is, they’ve been slapped on barbecues the world over and our love for them runs deep.

Smoked, roasted, baked, and braised are a few ways you can manipulate these tasty meat offerings, with recipes often fiercely protected. Here at Metropolist, we take our job very seriously, so we scoured the Coast on a meat-crazed odyssey to uncover for you, our readers, the best ribs on the Gold Coast. Tough gig, but we didn’t mind taking one for the team.

The boys at Bondi Grill’e have recently set up a bricks and mortar store, and are serving up some serious meat talent down in Cooly. They have you covered with half racks of beef, pork, and lamb ribs all dripping in their very own secret sauces—and this is a secret worth keeping! If you don’t take our word for it, why not ask 2015 surfing world champion, Gabriel Medina or any other pro tour surfer who’s popped by to get their meat fix in the past month. Don’t believe us? Check out their Facebook page! Ribs and pro-spotting aside, they have a pretty epic burger lineup as well as salads for the health conscious. Hats off chaps. 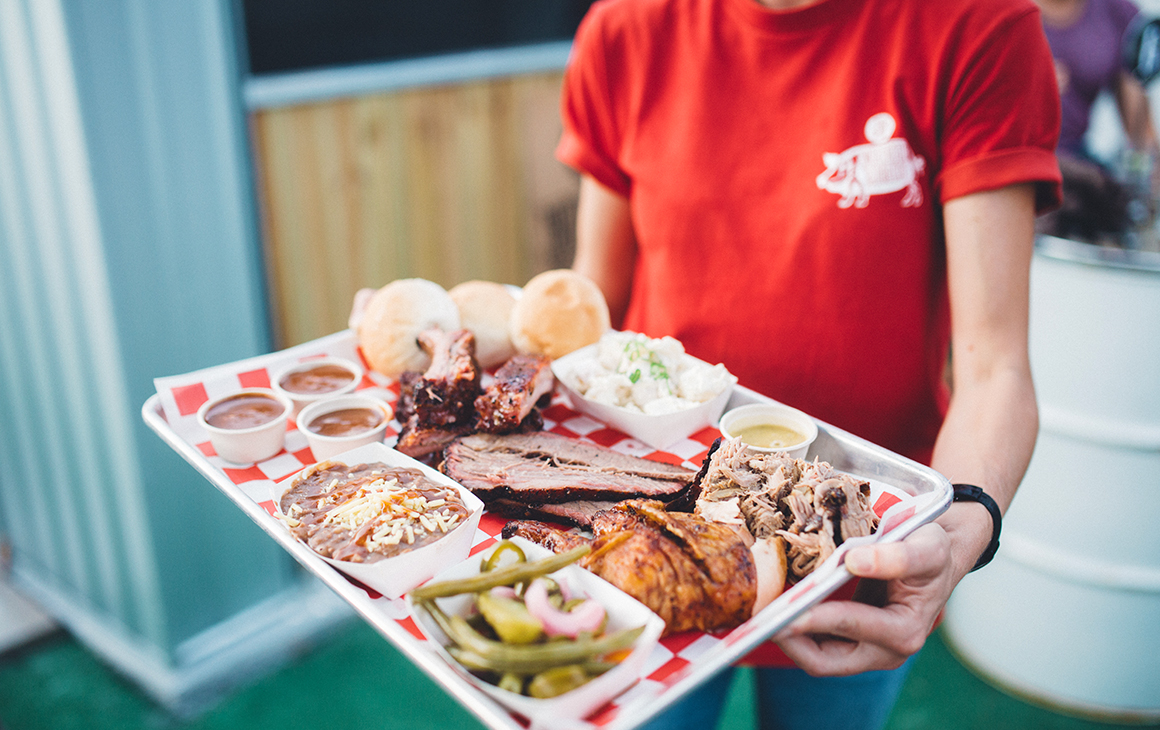 Now JR’s Smokehouse take their wood-fired barbecuing very seriously; hailing from the US, where the owner developed a life-long passion for southern states-style barbecued food. With guidance from one of Texas’s barbeque legends, JR opened his mobile smokehouse in 2009 and hasn’t looked back. Today, operating from a permanent home at Coolangatta’s Sunhouse Surf, with huge emphasis made on seasonings, marinades, and sauces, right down to the very wood used in their on-site barbecue pit, you know you’re getting a genuine experience. Barbecue Pit Beans? Yep, they’re as good as they sound. Still available for event catering, JR’s permanent fixture at Sunhouse Surf is open Thursday through Sunday evenings from 5pm. If you need extra reason, their Sunday session is worth the mission south. 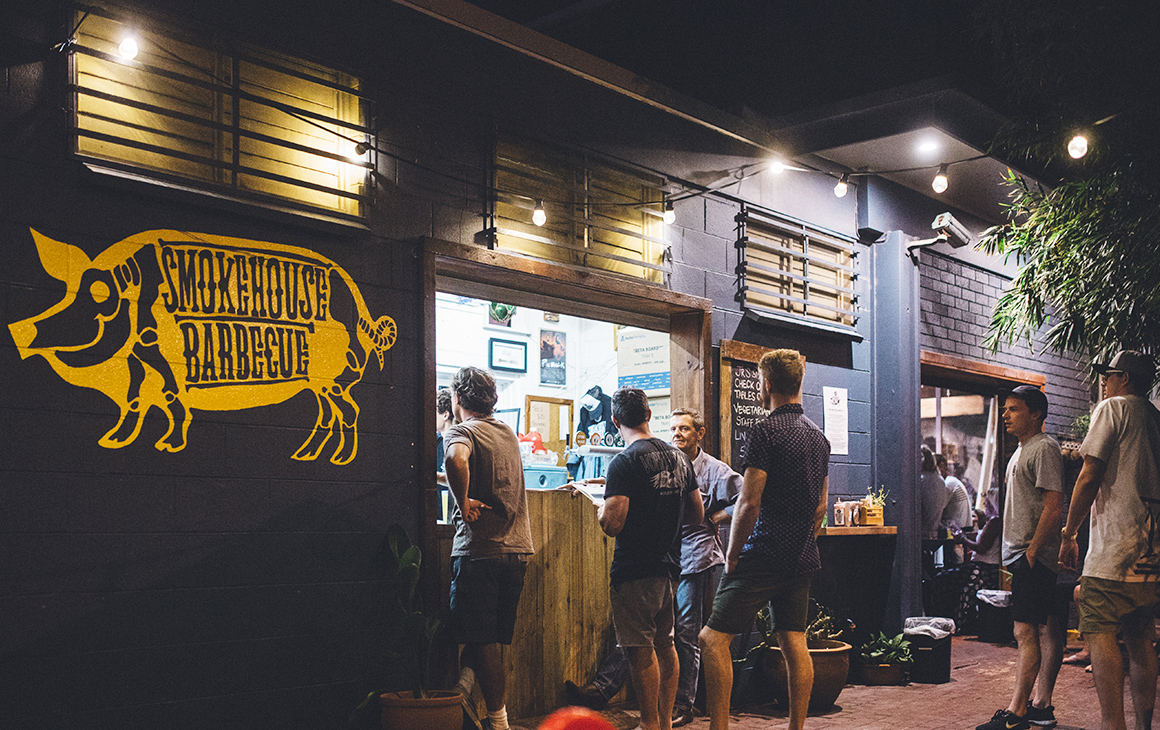 The most happening joint on Chevron Island also lays claim to some of the best ribs on the Gold Coast. Tribeca NYC’s décor and overall feel is a very cool New York City-styled restaurant and bar, which they pull off with ease. No cheese here. Tribeca’s beef and pork ribs are slow-cooked for 12 hours and smothered in their very own smokey sweet sauce—the best time to try ‘em is on Wednesday Ribs Night (hint: you must book in advance). Worth mentioning also are their four versions of Mac and Cheese and a steak dish with bourbon in the sauce (genius).

A meat-lover’s institution, no list of the best ribs on the Gold Coast would be complete without Mike’s Kitchen. Come September, Mike and his kitchen will have been knocking out stellar finger-licking feeds for two decades. Happy Birthday Mike! Starting off in Robina Town Centre before relocating to Merrimac nine years ago, while some might say it’s slightly off the beaten track, this restaurant and its meat-focussed menu are definitely worth seeking out. The succulent ribs themselves, marinades, sauces, and cooking techniques have been honed for nearly 20 years, which is why they’re so god damn tasty. Mike’s selection of half and full rack of ribs are then backed up with the option of extra meats like steak, spicy Peri Peri chicken, and prawns. Meat on meat? Don’t mind if we do. Vegetarians are not forgotten though, with a sizeable selection of dishes as well as suitable dishes for the little people. 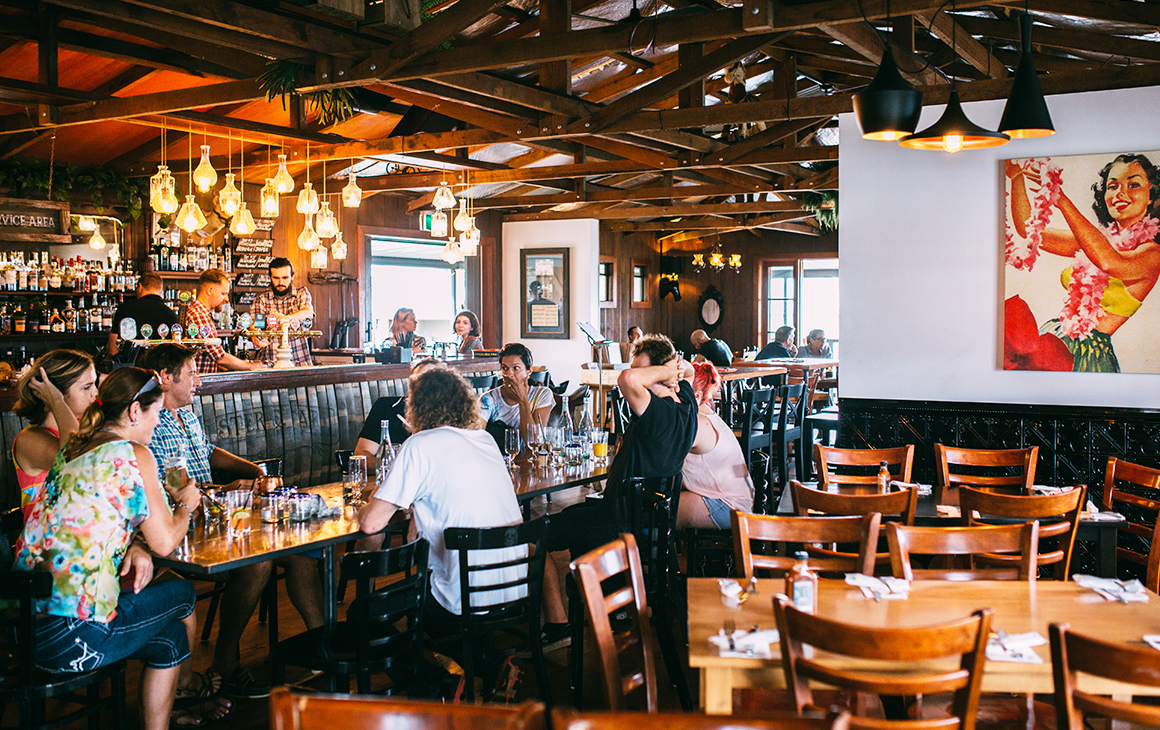 Think John Wayne in an Aloha shirt…then you’re on your way to understanding Lester & Earl. The guys here have truly created a special space with a unique blend of 50s Americana and surf culture. Vintage pieces don the walls and a Marlboro Man mural looks you in the eye, all within a stone throw of the rolling waves of Palm Beach. Texas short ribs, free-range grass-fed Berkshire pork, and a Cape Grim brisket are the highlights here. And they don’t let up on the sides either with cheese potatoes, smoked corn, corn bread, and their infamous Stupid Fries that’ll see you undoing you top button, or two. It’s worth adding Lester & Earl have a plethora of good tap beers available, including limited release Stone & Wood “pilot batches” regularly holding pride and place in the tap line up.

Moo Moo is a firm favourite among the best ribs on the Gold Coast and for good reason. Having recently undergone a glamorous renovation, this is one restaurant where you’ll need to bring your rib eating A-game. Suckling pig short ribs with caramelised orange, dupuy lentils and walnuts are a highlight; flavours so carefully executed these are elegant ribs and damn tasty at that. As you would expect, Moo Moo doesn’t stop there with an extensive wine list, delectable desserts, and flawless service, proving the food isn’t the only reason to spoil yourself at this Broadbeach hotspot.

Do you have a fave meat joint you feel deserves recognition among our list of the best ribs on the Gold Coast? Tell us in the comments!