You know you have a pretty good job when you go into the movies with the sole purpose of watching Tom Hardy brilliantly mumble his way as a maddening Max for approximately two hours, all while glued to the edge of your seat as things explode and entrails snap and everything else is lost in a thundering wave of blood, fire, gasoline and dust—all in the name of research. Forget the fact that Fury Road was filmed in the Namibian desert: Mad Max is and will always be an Australian institution. And if the world does indeed go belly up and all that's left is a bunch of weirdos battling in out on a barren desert wasteland, isn't it kind of cool that that last scrap of land turns out to be 'Straya?

For decades the Mad Max franchise, with its violent and unrelenting disposition, has been cited as the unlikely source of inspiration for designers, all revelling on its dusty, leathery, post-apocalyptic panache as a glossy yet rough alternative to steampunk.

Think Grace Coddington and Arthur Elgort's now iconic Madly Max editorial shot for Vogue US back in 2000, starring a young Karmen Cass and her Yamamoto-clad gang, including an even younger Ansel Elgort sporting a tiny mohawk shaped with white clay, and you’ll probably get the picture on how to rock barbarian chic, as Vogue itself coined it. If you don’t know what I’m talking about, go ahead and Google it, because that’s some of the best imagery Vogue US has ever produced, and that’s saying a lot.

Christophe Decarnin’s leather pants and tattered army fatigues awash with slashes, sequins and dirt for Balmain in 2010, Raf Simons’ Armageddon-ready patched leather jackets for Dior Resort 2016, Junya Watanabe’s psycho punks back in Spring 2006, Ann Demeulemeester’s desert dwellers, Karl Lagerfeld’s smouldering rumble for Chanel in Fall 2011, Gareth Pugh’s skin-baring and leather-bound ensembles, or even his couture appropriation of garbage bags: fashion has always loved the anti-hero, the dystopian, the underdog. Good to mention too would be Rick Owens’ road-raged, crown jewel-baring warriors at his menswear outing for Fall 2015, as the strategic genital cut-outs of one of his war boys could well deserve a column of their own - #freethepenis, do or don’t? I mean, since we’re talking end of the world and all.

So whether the end of days comes by the way of nuclear explosion or zombie apocalypse, here’s our quick guide on how to brave the resulting wasteland in style. You know, preferably after you stock up on gallons of gasoline, pimp your boyfriend’s ute until it’s close to becoming a transformer, raid a police station for weapons and drive as fast and as far away from the impending doom as you can because survival is a priority.

If you haven’t yet bought that leather jacket all wardrobe essentials hit lists have been hammering you to by for the duration of your adult life (seriously, what’s wrong with you), then now is the time. Ditto for the leather jeans—you may like them skinnier, but I would personally suggest something relaxed, more culotte-y or of the parachute variety, not only because any variation of Mc Hammer pants can conceal an army or two, but also because this is ‘Straya and eventually it’s gonna get hot as balls—and, during a manic car chase, I will assure you that you will want a bit of wiggle room, or at least some fresh air up your pants. You can’t wear that sh*t shiny and new though because you’ll just end up looking like an extra in The Matrix, and that’s so not the kind of apocalypse we’re going for here, so please feel free to roll in the sand for a good couple of hours, or dunk your clothed self in a bucketful of Frank body scrub which is not only the best thing ever, but it’s also made of coffee so strong you will soon too be screaming WHAT A LOVELY DAY, even if it’s in fact Monday, the world has ended, and it is not, in fact, a lovely day at all. #butfirstcoffee

You know that leather top that all wardrobe essentials hit lists have also convinced you to buy last year or so? Bust that baby out of the closet, and wear it together with all of the aforementioned above. If everything else fails, or if you do not own any extensive amount of the stuff, wrap your mid-section in a few of your favourite leather belts and use them as devices to secure, and from which to dangle, all of your most vital and immediate needs. Stack them up, as many as you can. What’s an arm party compared to a torso party? Celebrate with a hands-free dance.

Speaking of hands-free, now that you’re conveniently dressed in leather and thus obviously one step closer to becoming Charlize Theron, we must address the issue of your bionic arm, or lack thereof. Simply put, this is the must-have accessory du jour to invest in for the apocalypse—what else would you bash people’s heads with?

How could one forget Tina Turner’s chain mail dress in Mad Max: Beyond Thunderdome? One couldn’t, because the thing was so shiny it is likely to be deeply embedded into the retinas of many a moviegoer of the time.

That being said, treat silver and gold just the same way as you would your trusty old black, by which I mean dip yourself in head to toe until you can’t distinguish yourself from an Oscar, or better yet, C3PO. What is a killer look for the party season could also serve as armour and a way of communicating in the open wasteland, because where there’s metallic surfaces, sun and desert, there are epic reflections and all that. Talk about a great entrance. 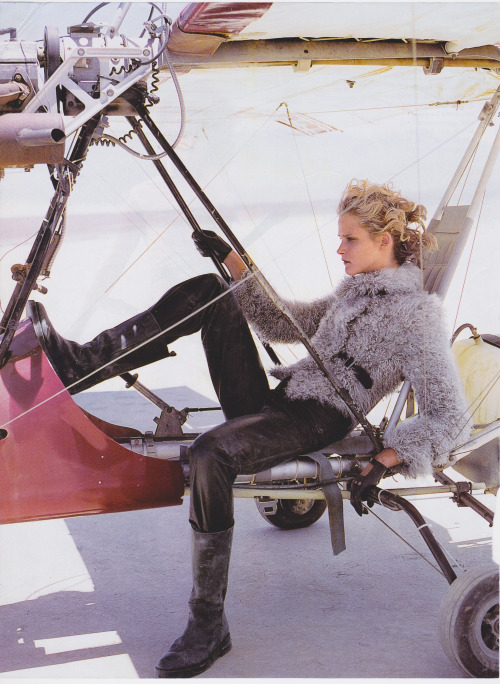 Forget the fresh-faced, the dewy glow, the no make-up make-up: we’re talking serious commitment here. Caked-in, heavy-handed, furiously black smoky eyes will take longer to perfect than a Kardashian kontour, but the reaping of bad-assery rewards will be endless. Also we’re feeling the war boy look will be the next big thing right now, so ditch your spray tan for a spray white. Or pile on the 50+ sunscreen.

If there’s anything to learn from Mad Max, and from other seemingly unrelated post-apocalyptic franchises of the Mockingjay variety (Hunger Games fans, we’re looking at you), is that if you or your dress aren’t on fire then you are not doing it right. I will even do my habitual, not-so sneaky Game of Thrones reference and tell you that Khaleesi, stepping into that pit of fire, had it right all along.

If you are a guy, bonus points if you own a flammable musical instrument with which to flaunt your cool because, you know, nothing is cooler than SORRY, COULDN’T HEAR YOU OVER MY FLAME-THROWING GUITAR cool. If that doesn’t get you in our collective pants, my friend I have no idea what will.

Now this may seem less of an obvious one than say, steel toecap combat boots made to effectively kick your enemies’ behinds, but bear with me. Raw denim is having a moment right now, and considering its rigidity, durability, the fact that it is meant to be worn for months without a single trip to the washing machine and the rumours that, just like the Twinkie, it can withstand a nuclear explosion, makes it the ideal, most sensible and sustainable choice to wear at the end of times.

Your male counterpart might not have understood the need for all those bags or their real sentimental or monetary value, but in the light of the last of days, the purpose comes clear. Pre-apocalypse, not only did you carry all of your life inside it, but now as keeper of seeds you can literally carry all future life inside it. Price tags, justified.

If you are in the business of being a villain, nothing apparently means bad business like an over-the-top respiratory device. Think Darth Vader, Batman’s Bane and now Immortan Joe and his manic offspring Rictus Erectus. Which means asthma and long-time hay fever-sufferers, now is the time to rise to the power.

Sure, you may or may not look like model cast Rosie Huntington-Whiteley, Zoë Kravitz, Riley Keough, Courtney Eaton and Abbey Lee Kershaw, but we’re telling you right now wispy scraps of white fabric will be, right there with the extreme make-up, the next big thing. Virginal and dust-caked, they’ll offer plenty of freedom of movement to brave the wasteland without the danger of succumbing to a leather-induced heat stroke. Even Caitlyn Jenner has jumped right on to it, by deciding to don her first cover and public appearance in what is no more than a somewhat revealing, wispy scrap of white fabric. That, my friends, is #trending. Now expect to see a lot of white on the catwalks. 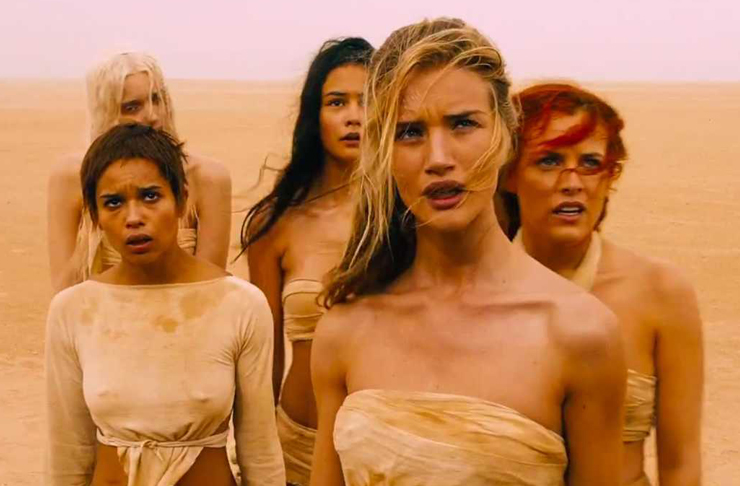