The corner of Redfern Street and Regent Street is well on the way to becoming one of Sydney's most exciting restaurant and bar destinations. With a bank of new venues recently joining the bustling area (Atomic Beer Project and The Sunshine Inn among them), as well as the tried and true spots still providing the goods for locals—hop off the train at Redfern Station and walk around like a kid in a candy store.

One of the latest additions to the inner-city hospo hub is Vietnamese fusion restaurant, Kinhboy. From the good folks who brought us Barangaroo's Marble and Surry Hills' Tokki restaurants, comes a unique and funky alternative to traditional Vietnamese dining. Kinhboy's vibe is all about plating up incredible food but not taking itself too seriously. "I wouldn't say fine dining, I'd say more elevated dining," says venue manager, Ben Dawson.

The intended cheekiness of the "Vietery", as Dawson describes it, is apparent from the outset when you see the venue's logo—a young man holding up a pair of upside-down hand goggles you definitely tried as a kid. Inside, a glowing red neon sign reads "Pho King Amazing", and another gives an “OK” hand signal. That mesmerising, soothing red hue shines onto the exposed, clean concrete walls and throughout the otherwise dimly lit restaurant. "We wanted the atmosphere to be dark and bright at the same time," says Dawson.

The idea behind Kinhboy's unique and eclectic menu was simple: modernise Vietnamese food and make it a little more up-market. For head chef, Peter Wu (ex Phởmo, Sunset Sabi, and Upper East Side), that meant recreating traditional Vietnamese dishes and bringing other cuisines into the process. "We're trying to make Kinhboy into more of a nightspot, more of a casual dining experience for locals in Redfern," he says. "We want to produce a level of Vietnamese food that's a little more refined than what people are used to."

The menu is far from traditional and sings of Wu bringing together his favourite cuisines and culinary experiences. "I try to impart some of my own eating habits and food profiles into the kind of dishes that I cook," says the head chef. The beef short rib pho is served up in a thicker than usual 18-hour slow-cooked broth with rendered wagyu, more closely resembling Japanese ramen. 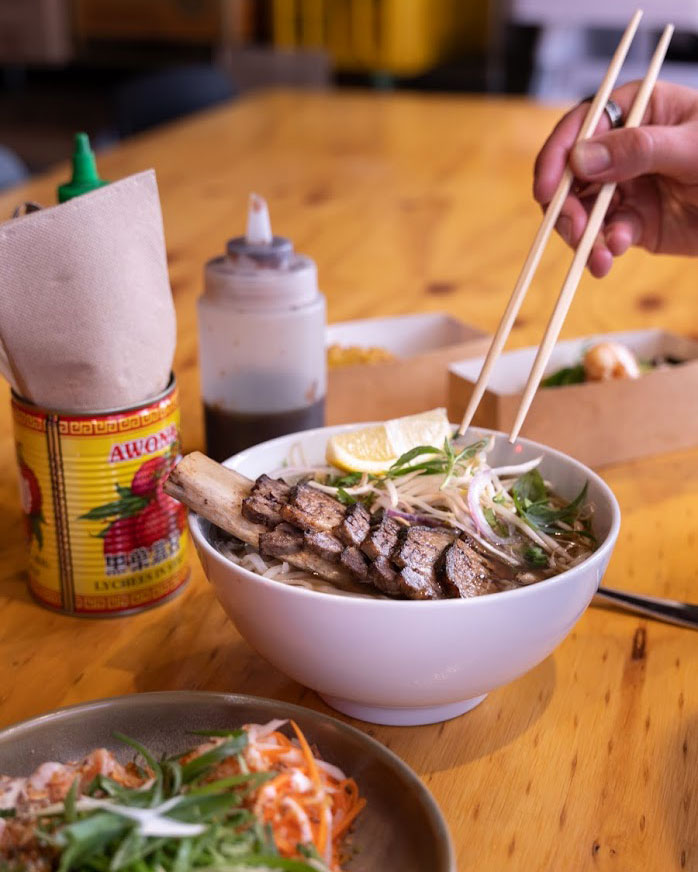 The beef tartare cured with finger lime is a French spin on the Vietnamese rare beef salad, bò tái chanh. Wu also uses spicy Korean marinades called gochujang. "I think about marrying those kinds of cultures and flavours into a more Vietnamese take, without losing too much of the identity of the dish," he says.

One of the most popular creations on the menu is the bánh xèo tacos, a South American riff on traditional Vietnamese crepes made from turmeric powder, rice flour, and coconut cream. While usually served as a large crepe with bean shoots and meat, Wu explains that a lot of people have trouble with eating the dish, and other traditional Vietnamese meals, properly. "I want to have those flavours", he explains. "But when it's presented traditionally, it makes it difficult for a lot of people to have it for the first time and actually eat it correctly."

Although they inherited the long open plan kitchen, Kinhboy's vibe of part fine dining, part street eats is complimented perfectly by the openness of the sensory cooking process. You can even pull up at the counter and face the busy chefs to soak in the sights and smells.

As for drinks, you'll be able to wash down those share plates with a full menu of colourful and fruity, Asian-influenced cocktails perfect for the 'Gram. The “Cucucooler”, with soju, lemon juice and cucumber, and the “Hanoi Sunrise”, with white rum, strawberry puree, yuzu, mint and lime, should each do the trick to cool down any hot mouths. You'll also find some rotating natural wines and craft beers. They're currently showing love to their neighbourhood and pouring Atomic Beer Project fresh from the brewery just a few doors down.

Whether you pop in during the workday for their express lunch menu or at nighttime for the full dinner date experience, we think you'll find there's still plenty of room in Sydney for a bit of fun and great flavours.

Kinhboy is open now. For more info plus opening hours, head over here.

Heading to Redfern? You'll also want to check out this new microbrewery and this new neighbourhood bar with a plant-based menu and a hidden dining room.