11 Restaurants Open On A Monday Night

You know what's cooler than waiting in line for a hot restaurant table? Not waiting in line. Sydney, the city of culinary queues, has a thing for orderly restaurant lines on Friday nights. Buck the trend, and eat out on a Monday night. Like saying your first swear word, or listening to old Mariah Carey records, you know it's wrong, but it feels so right.

This list of some of Sydney's best restaurants are open on Monday night which means you'll skip the end-of-week queues, and get some seriously good nosh to boot. Don't like Mondays? Now you will.

The menu at this Bondi eatery spans Central American to Cajun food that we've grown accustomed to over the years. There are some light offerings of ceviche and oysters, as well as sticky ribs. The house burger is made from hanger steak, otherwise known as the butcher's prized cut of meat from the cow-beast, with pickles and parmesan fries.  And on Monday nights, there's always a burger special on offer – think southern fried chicken with black beans, avocado, red cabbage and sour cream. Panama, ooh la la.

Heh heh, because it spells MSG, geddit? The tongue-in-cheek reference to the umami additive sets the tone for Dan Hong's eatery which riffs on Vietnamese, Chinese, Malaysian, Korean and Japanese culinary themes – this is good food made fun. Hong's versions of mini bánh mì with chicken katsu are incredibly more-ish, and the Angus beef stir-fry with chrysanthemum kimchi pops with the contrast of wok-smoky meat and bright pickled flavours. You can't go past the desserts named "Bruce Springsteen" (buttered popcorn with honeycomb) and the famed "Stoner's Delight" (basically every dessert featuring peanuts/chocolate/hazelnuts, paired with bacon and potato chips), and luckily, on a Monday you have the rest of the week to atone for your sins.

It's pretty straightforward. The burgers at Mary's are delicious. We won't delve into the semantics of what constitutes the best burger in Sydney right here, but this is one of the best. So is the fried chicken. And the mash and gravy. And there's a beaut selection of wines and tap beers. You should reward yourself for a hard first day's work. Go on, you deserve it.

If you've done mid-week Japanese to death, Cho Cho San is a breath of smoky barbecue air. The izakaya-style restaurant serves up protein-friendly dishes from the hibachi grill, like chicken yakitori and sticky soy-glazed beef. Beautiful Eastern suburbs types will be swooning at the raw bar selection, mainly featuring delicate sashimi, carefully paired with pickled eggplants, daikon, or soy dressing. Like Cho Cho San herself (go on, Google her), you'll be declaring your undying love for this place. 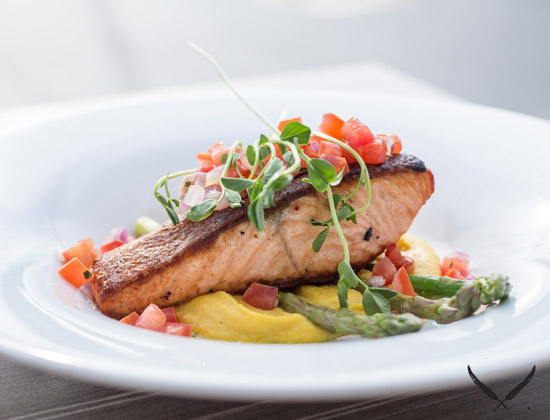 For those confined to a windowless cubicle, or for those who just want to pay our beautiful harbor a visit, Searock Grill is a great spot to get some decent dinner, and time to indulge in those views you've missed during works hours. This is a grill restaurant, so meat is the focus - diners can select a modest-sized 160g beef tenderloin, the ravenous can tackle the 500g grain-fed T-bone. Situated right on the harbour, there's no better place to enjoy panoramic views on a Monday night!

The folks from Fratelli Paradiso have taken their good Italian hospitality to smaller digs just off the main shopping drag of Paddington. And with the smaller venue comes small plates, perfect for grazing on while sipping on a glass of wine, most likely recommended by the very knowledgeable waitstaff. The dishes are of the modern Italian persuasion, but can also throw up pleasant surprises like raw kingfish with emulsified parsley and young coconut flesh. These folks are open till midnight, so luckily, you can sip and sup till the clock strikes Tuesday morning.

Busy boys, Matt Moran and Peter Sullivan of Aria and Chiswick have turned to the sunny dining combo of beach and fish at North Bondi Fish. Of course, beer-battered fish with chips gets a run on the menu, but there are more interesting fishy items, like swordfish with salsa verde and beans, and raw salmon with wasabi and ponzu to be had. There's excellent variety in the wine list, especially for lighter, crisper reds and whites, featuring drops from around Australia and France.

Unusually, Nomad has found its place on a hilly corner of Surry Hills that is more home to Thai and Vietnamese eats and loud 'n' proud whisky dens. The one-hatted restaurant has generated a lot of buzz for its Mediterranean-inspired menu, so Mondays are a go-go if you don't want to try too hard to snag a table. Once you're in, it's warehouse-chic territory - open kitchen, cheese-room, wood-fired oven and all. It's hard to say what's better – the exquisite charcuterie board of house-made meats, the kingfish carpaccio with house-made crême-fraiche, or the house-made haloumi with smoky zucchini and pinenuts. Are you sensing a theme? We are. It's delicious.

At the end of a traumatising work day, carbs, specifically pasta carbs, are your friend. Phrases like "orecchiette ragu" and "lasagnetta bolognese" have never looked so good or tasted even better. Wipe away your work tears with a comforting tiramisu (well not literally, that'll get messy), and chase it with a silky panna cotta, served with a changing line-up of sweet syrups and seasonal fruits. It's the familiar stuff done with minimal fuss and maximum quality that will keep you coming back to Fratelli Paradiso.

Alright, so you have our permission to eat here on Monday and Tuesday. Locals' Night(s) means all mains are an easy 20 bucks each, so it's really a case of exchanging your lobster (that's the $20 note for you non-ol'-timey talkers) for a seafood-laden paella, or gnocchi with wild mushrooms and goat's cheese. And since it's a school night, you should probably take the kids too. They'll be pretty chuffed at the kids' menu, and will be gobbling down their duck ragu pappardelle without complaint.

Like pyramid-builders or Latin interpreters, botanists are part of the group of occupations we learnt about in Year 4 history lessons, but are quickly fading from 21st century life. Thankfully, Kirribilli's first small bar/restaurant The Botanist keeps the profession alive. The place is adorned with lush greenery and flora that puts our long-suffering succulents to shame. The food looks as pretty as the decór, with the menu featuring the likes of seared kingfish, pea puree with fennel and aniseed foam, as well as their famed sliders. Get some flower power into your body.